Pele said in 1977: “It’s great to be in Rochester. And their water is so beautiful.” (Photo courtesy of the Cosmos)

Forty-five years ago this past summer, Pele and Franz Beckenbauer faced an obstacle that maybe had more challenges than a soccer team – getting out of New York City due to the great blackout of July 13, 1977.

Back in the day, the North American Soccer League was at the top of the U.S. soccer pyramid and the Cosmos were ready to ascend to the top of the league.

With a new coach (Eddie Firmani) and a new addition (Beckenbauer), they also were ready to meet their next challenge — against the Rochester Lancers at Holleder Stadium on Friday, July 15.

Except there was one big problem: two of their best players — Pele and Beckenbauer – endured an adventure and a half getting out of the city and flying to Rochester for the encounter.

Pele and Beckenbauer, who resided in Manhattan, were given misinformation about the departure time of the team plane. “I heard from the radio that all flights were being delayed,” Pele said at the time.

Most of the team lived in New Jersey or Long Island, which was unaffected by the blackout.

The two soccer legends missed the flight and a big press pre-game conference in their honor that was supposed to promote and hype the game. They eventually arrived in the western New York city on separate afternoon flights.

“It’s great to be in Rochester,” Pele told me after he arrived. “And their water is so beautiful.”

Both men flew into town unshaven. “We had no water, no electricity,” Beckenbauer said. “Nothing.”

“I called Mike Martin [Cosmos general manager] at eight in the morning and he told me that maybe we’d take an afternoon flight,” he said. “But when I got to the terminal for the flight, the team wasn’t there.”

The night prior, the two players spent an evening unbecoming to soccer superstars. They were having dinner with Firmani and nine other guests at the apartment of Cosmos assistant coach Prof. Julio Mazzei. That’s when the blackout struck. Elevator service was knocked out and they were 33 stories up and too far from home. So, Pele and Beckenbauer roughed it and slept on the floor with the guests.

“I finally left in the morning — down 33 floors, then up 11 to get my equipment and then down 11 again,” Beckenbauer said. “It’s good training and practice.”

Firmani stayed at the offices of Warner Communications, the club’s owners. He flew in on game day.

“It was a very exciting night,” said Mazzei, Pele’s confidant. “I never realized something like this could happen in New York.

“People were screaming in the elevator. For Pele, it was time to relax. We had dessert. Then he telephoned Brazil to tell his family everything was all right. A little later he composed some music.”

Mazzei and Pele found their own ways to the airport. Mazzei needed leave at 6 a.m. to pick up a new player Carlos Alberto — the same Carlos Alberto who captained the 1970 World Cup championship team — who had just arrived from Brazil at JFK Airport.

With a pre-game sale of 7,000 for a team that averaged around that figure, the Lancers need the revenue from a big team like the Cosmos. In fact, they chartered Regional Transit Service shuttle buses to take fans to Holleder from four locations because the parking lot would be overcrowded quickly. A club-record crowd of 17,652 watched the two teams tussle and like many games that are hyped to high heaven, the reality did not come close to the expectations. Rochester prevailed in a shootout (the one that started from the 35-yard line), winning the tie-breaker, 2-1, after the clubs played to a scoreless draw in regulation and overtime, as it was called back then.

After the match, I asked Messing about the tie-breaker; I worked for the Rochester Democrat and Chronicle at the time. “I’m not talking to the New York writers after games, so it really wouldn’t be fair starting with you,” he said, probably one of the few times Messing didn’t want to talk to anyone.

But at least he and his teammates could shower with hot water and dress in the light in the team locker room instead of darkness, thanks to electricity.

FEELING THE HEAT ONE LAST TIME: Lancers will visit Harrisburg on Sunday 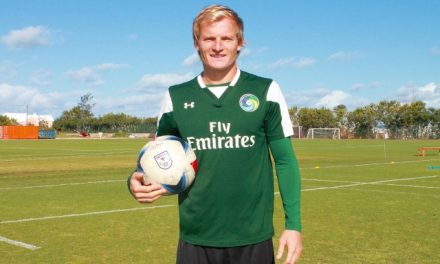 WIN AND THEY’RE IN: Cosmos can clinch an NASL playoff berth at Jacksonville