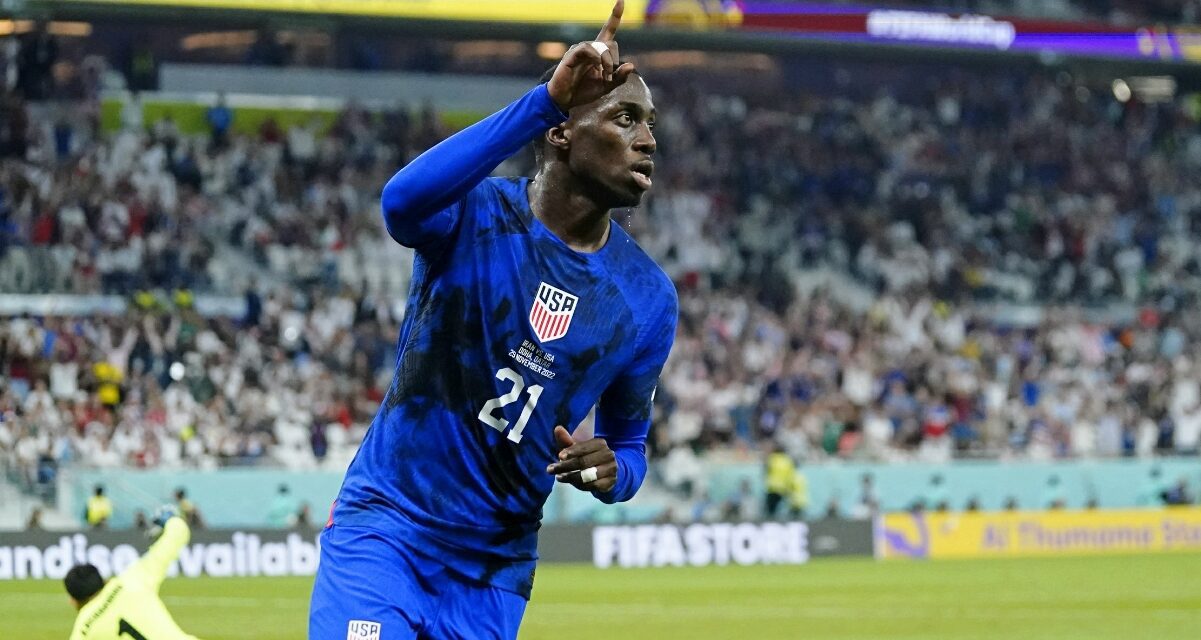 Tim Weah has been one of the USA’s standouts in Qatar. (Danielle Parhizkaran-USA TODAY Sports)

When Tim Weah scored a vital goal with the outside of his right foot against Wales last week, that was nothing new to Paul McGlynn.

He had seen it many times before – when the U.S. men’s national team forward – played at B.W. Gottschee when he was developing his soccer skills at a higher level.

“It was a thing of beauty,” said McGlynn, Weah’s first coach at the storied youth club.

Indeed, it was, for so many reasons. That goal helped give the USA a 1-1 draw with the Welsh and a precious point.

“Most players would have used the inside of the foot and probably would have hit the keeper. He used the outside of his foot,” added McGlynn, Gottschee’s former director of coaching who is still a board member. “Timothy was doing that and 11 and 12 years of age. It’s just something that he had over everybody else, not the physical piece. Then the physical piece obviously came later.”

McGlynn later added: “There’s still not a moment in any game that I don’t remember where he did something special. I’m talking about with a flick or a touch. I always thought that was a separation factor that he had. People would say because it didn’t score two or three goals in a game, that he had a bad game. He was always playing off one or two years of age.”

For someone who is the son of a soccer legend, George Weah, 22-year-old Tim has done pretty well for himself. George never competed in a World Cup. Tim not only is competing in one but has a goal as well.

Weah has started all three matches as the Americans qualified for the knockout round in Qatar. The Americans take on the Netherlands on Saturday at 10 a.m. ET (FOX, Telemundo).

“I think everybody’s proud and everybody’s obviously hoping for a continued success for the U.S. against the Netherlands and further on,” McGlynn said. “I don’t think it’s shocking. I think there’s obviously, a lot of talent in this country. Timothy is a prime example. There’s not one pathway. You don’t have to be in an MLS Academy you know, 10 or 11 years of age to, to make it to the next level, but obviously to transition to Europe was very, very important.”

To appreciate Gottschee’s influence on soccer on the club and national level in the USA, several future professionals and national team players competed for the club.

McGlynn coached Weah’s when the future U.S. men’s national team player started joined the club when he was nine. Weah hailed from Rosedale, Queens, N.Y. He played with Gottschee from 2010-13, developing and honing many of the skills we see today.

He decided to play Weah up a year in the beginning before he started getting knocked around by bigger and more physical players. So, McGlynn decided to move the youngster to the 1999-2000 team. Tommy Flood was the coach of that tteam.

“Tommy was a great influence and a mentor to him,” he said. “He wasn’t someone that was all because you’re George Weah’s son, so and I’m going to give you a special treatment. It was the opposite. Tommy was disciplined and strict with him, understood what he had to do to take to bring out Timothy’s talents.”

Gottschee has a reputation for attracting good, young promising players and follows a philosophy of “being one with the ball,” as the legendary coach and mentor Ben Boehm has espoused over the years. In other words, players rely on skill before anything else.

“He immediately was playing with good players, which of course, accelerated his development,” McGlynn said.

It certainly didn’t hurt that Weah played with future professionals and Division I college players, such as current Red Bulls midfielder Omir Fernandes.

“I just think the environment that Timothy come into, he fell into good players,” McGlynn said. “You benefit when you play with the best.”

McGlynn remembered two incidents that stuck with him about Weah – one at training and the other in a game.

“At about 10 or 11 years of age, I was doing a crossing and finishing accuracy session and the ball came across and he took the ball out of the air and hit it on the volley,” he said. “It was just for me it was outrageous technique and balance for such a young player. Usually a young player of that age falls on the ground. But it just it was something different.”

Weah also could turn a game on its head, especially when he had to play in close quarters.

At a CJSL indoor tournament final in New York City that pitted two Gottschee teams from the same age group against each other.

“It was just absolute chaos. Scores would be 8-6, 75,5-4; just really, really exciting stuff,” McGlynn said. “Timmy’s team was losing 3-1 and in two minutes, he scored three goals and the team won 4-3. The place went a crazy.

“Everybody’s going to say oh did you know he’s going to be a pro and stuff like that. I’m old school. I’m like for [former Manchester United manager] Alex Ferguson. I don’t predict players below you 15, that type of thing. But there’s just things that he did – I use the word separation factor – from everybody else.”

Training and good coaching and direction can only take a player so far. There comes a time on the pitch in which he needs to rely on his skills, speed, physical presence and decision making.

“There are some things that he would do on his own and wasn’t coach driven. It wasn’t club driven,” McGlynn said. “It was when Timothy got into the final third, it was up to Timothy. We obviously have a game plan on where we’d like to build up the ball and keep possession and then moving into the final third. But at the end of the day, in the final third, that’s always going to be the decision of the player.”

Okay, let’s get to the elephant in the room.

Weah is the son of George Weah, one of the best who played the game. George was everyone’s player of the year in 1995. Today, he is the president of Liberia. George’s wife Clar, once owned a bakery in Brooklyn, N.Y.

The first thing that might come to an outsider’s mind is that Tim got special treatment because he was the son of a legend.

Not so, said McGlynn.

But didn’t hurt that Tim had the DNA of his father, but he didn’t take anything for granted and earned everything he achieved.

“The kid worked really, really hard and he worked on his own,” McGlynn said.

It certainly didn’t hurt that his parents did not interfere with Gottschee coaches, whether it was at training or games.

“George and Clar are model parents,” he said. “When you talk about parental behavior, when you have someone that behaves this way, it is so laid back. … There was never any pressure that you had to put this kid into. In fact, there was a lot of times when especially with the older group, for Timothy would come off the bench or was on the bench, and they never complained. They never said anything, I think George was happy that he was there. But obviously, it was time for Timothy to move on because, you know, he was excelling.”

Tim eventually joined the Red Bulls Academy for a year in 2013-14 before venturing to Paris St.-Germain’s youth program in 2014. Weah turned pro with the French Ligue 1 team in 2018. PSG is one of George’s former clubs.

Clar probably is the unsung hero of the family.

“She is one of the nicest most humble people you will ever meet,” McGlynn said. “She’s a wonderful human being and she is so gracious. Always text you every now and again. She reaches out to Tommy all the time; she reaches out to me.

“His mom used to bring him everywhere. I don’t ever remember her missing practice. I would keep practice on if it was rain, sleet, snow, cold, warm, whatever it was.”

Once in a while George would attend a Gottschee training session.

“It’s funny. He would play with the kids. I would put him on goal,” McGlynn said. “It was just different. When you tell the kids about George way of being the best player in the world in 1995, they’re like, who’s George Weah? It’s more to parents that know who he is. They’re still wrapped up in Messi and Ronaldo and all that type of stuff. So, it was easy with him that he wasn’t treated any differently and he didn’t want that either.”

When he was at PSG at the age of 17, Weah trained with the Gottschee U-17 side.

“You could just see the difference,” McGlynn said. “I mean, he was just electric. It’s amazing. What happened in like two years, with him being at PSG being surrounded by such players. When he did come back to the club, you know what all the young kids asked him of questions about Neymar. There weren’t questions about anybody else.”

Neymar plays for Brazil, one of the World Cup’s favorites.

Three years ago, Weah returned to Gottschee with his mother and aunt and made a donation to the club.

“I’m not a big guy on social media so it didn’t get publicized all over the place, but I thought it was really cool,” McGlynn said. “I brought up all the players to come meet him and they were able to ask them questions. He spoke very highly of the club, and so did his mom.

“He a wonderful young man off the field as well. There’s no arrogance, there’s no cockiness. So that’s obviously a testament to his upbringing and his parents.” 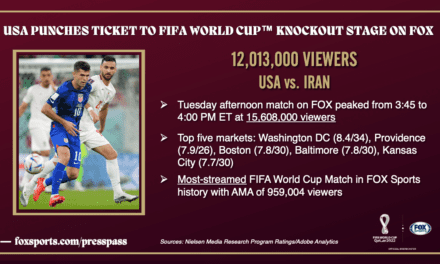 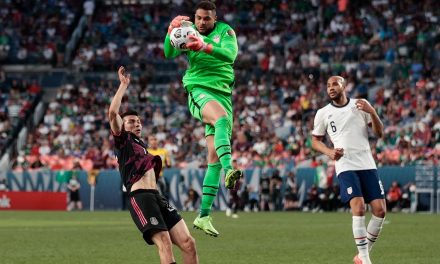