TALL ORDER: Hofstra women take on No. 5 Georgetown in NCAA first round

The Hofstra University women will play at fifth-seeded Georgetown University in the first round of the NCAA Division I tournament, it was announced Monday by the NCAA Selection Committee.

The game is set for Saturday at 1 p.m. at Shaw Field in Washington, DC.

The Pride (10-7-4) earned the Colonial Athletic Association’s automatic bid after defeating Northeastern University in, 2-1, in extratime Saturday in Brookline, Mass. Krista Agostinello’s goal with 1:30 left in the second extratime was the difference and gave Hofstra its second consecutive CAA title. The Pride was the eighth seed in the CAA Championship and became the lowest-seeded team to win the conference tournament.

The appearance is Hofstra’s 10th in program history and sixth since 2015. Hofstra is 5-9-1 all-time in NCAA Tournament Play and has advanced to the second round six times, including in each of its last three appearances (2018, 2019, 2021).

The Hoyas (14-1-5) won the Big East title for the third consecutive season and enter the NCAA Championship on a 17-game unbeaten streak (13-0-4). Senior All-Big East First Team selection Gia Vicari leads the team with six goals and four assists, while Big East Defensive Player of the Year Julia Leas and Goalkeeper of the Year Allie Augur anchor a defense that has allowed eight goals all season with 15 shutouts.

Hofstra and Georgetown have met on two occasions. The Pride is 0-1-1 all-time against the Hoyas. The teams played in the first round of the 2015 NCAA Tournament and went to a 2-2 draw before the Pride advanced on penalty kicks, 4-2. The first meeting between the schools was in 2012 at the James Madison Fairfield Inn Invitational with the Hoyas winning, 2-1. 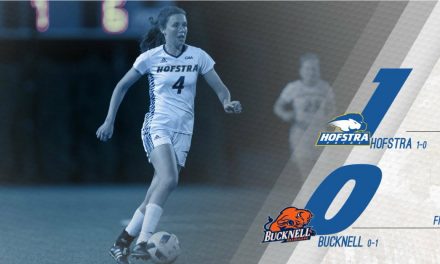 GETTING OFF ON THE RIGHT FOOT: Hofstra women open up with a win at Bucknell

VYING FOR ANOTHER UPSET: Hofstra women meet No. 23 Wisconsin in the NCAA second round