WHEN A TIE FEELS LIKE A WIN: Hofstra men earn road draw at No. 24 Virginia 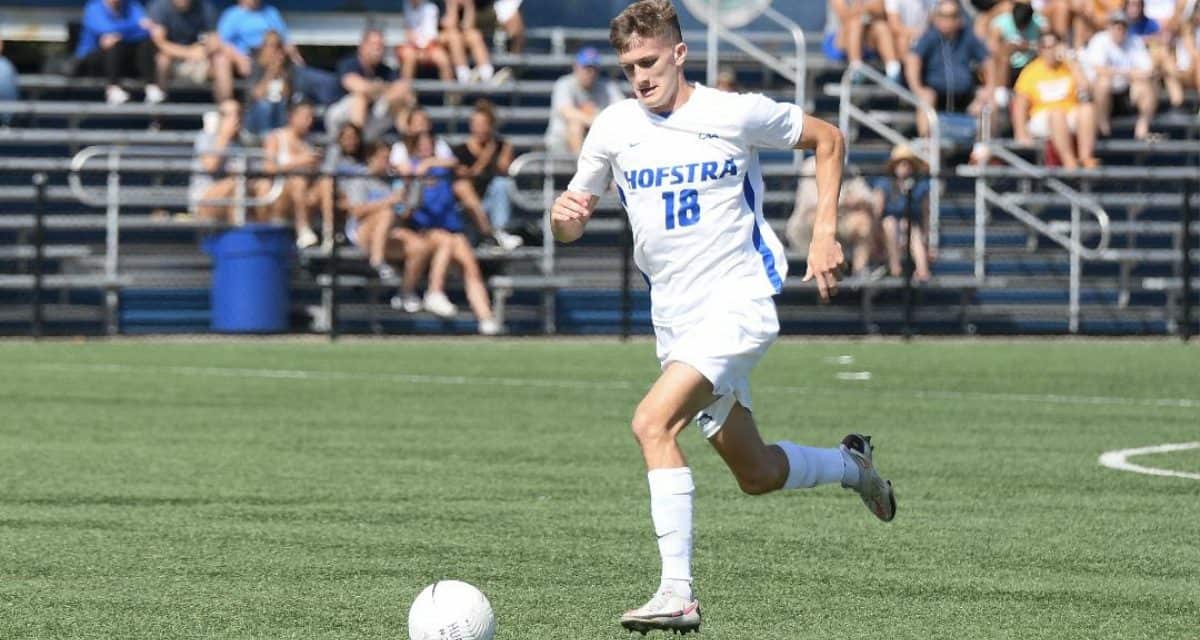 Ryan Carmichael scored off a free kick for the Pride. (Photo courtesy of Hofstra)

Ryan Carmichael gave the Hofstra University men the lead, but No. 24 University of Virginia scored the equalizer on a penalty kick several minutes later as the teams battled to a 1-1 draw at Klöckner Stadium in Charlottesville, Va. on Tuesday night.

It was the first point that Hofstra earned against the Cavaliers, improving its record against the perennial national power to 0-3-1. The team also is 4-1-2 on the road this season.

The Pride (9-3-2) employed a defensive game plan against the Cavaliers (8-4-2), packing the box with defenders. The strategy worked as Virginia managed only three shots on goal. Hofstra did not have many offensive opportunities of its own with two shots, both on goal.

The visitors struck first in the 67th minute after Oliver Svalander’s strong individual effort as he tried to work the ball into the 18-yard box and drew a foul just outside the line. Ryana Carmichael took the 19-yard free kick and launched a missile over the wall and into the upper right side of the net.

Carmichael’s tallied his 27th career goal, moving him into a tie for eighth place on the Hofstra career goals list with Fabio Berlingieri (1984-87). Carmichael also has 65 career points to tie All-American Joe Holland (2012-16) for 10th on the points list.

Hofstra was whistled for a foul in the box, which resulted in a penalty kick in the 76th minute. Philip Horton converted his kick into the left side of the goal to tie the game with just over 14 minutes left.

Both teams had chances down the stretch with the Pride drawing back-to-back corner kicks and the Cavaliers shooting wide and getting a corner kick, bit neither could get the decisive goal.

Pride goalkeeper Wessel Speel finished with two saves. Holden Brown had one save for the Cavaliers.

Hofstra visits Drexel in a key Colonial Athletic Association game in Philadelphia on Saturday at 1 p.m.

JUST IN THE NICK OF TIME: Taylor’s late goal lifts Hofstra into tie with William & Mary