In a matchup of teams tied for first place in the Colonial Athletic Association, Elon University recorded a 3-1 victory over the Hofstra University men at Hofstra Soccer Stadium in Hempstead, N.Y. on Saturday night.

All of the scoring took place in the second half.

Vemund Hole Vik took advantage of a Hofstra turnover in the box to put a shot past goalkeeper Wessel Speel at 53:35 for a 1-0 lead.

Victor Stromsten scored at 79:55 off a corner kick by Scott Vatne to extend the lead to 2-0.

Vatne added a goal of his own at 81:49 when he intercepted a pass from Speel, who was off his line at the top of the box and chipped the ball into the open net.

Hofstra averted a shutout with three seconds to play when Ryan Carmichael scored on a penalty kick.

Hofstra travels to Charlottesville, Va. meet the University of Virginia on Tuesday at 7 p.m. 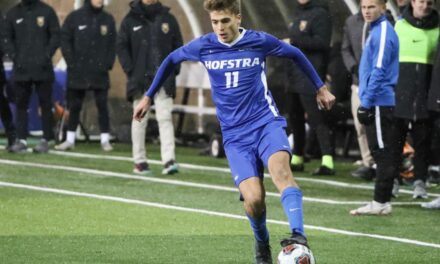