After the St. John’s University men pulled even on an Antek Sienkiel goal in the 79th minute, Seton Hall added another late tally to claim a 2-1 Big East victory at Owen T. Carroll Field in South Orange, N.J. on Saturday night.

Sienkiel’s goal was his sixth of the season, second in the conference. The Marist College transfer is the first Johnnie to log six or more goals in a season since Tani Oluwaseyi found the back of the net 11 times in 2019 on his way to BIG EAST Offensive Player of the Year honors.

Wesley Leggett picked up his team-leading third assist of the season.

Andrea Borg recorded the game-winning goal for Seton Hall, his third of the season. The senior from Malta also helped create the Pirates’ first score, sending a cross into the box that resulted in an own goal.

The Red Storm will return to action against Xavier University at Belson Stadium on Wednesday night. 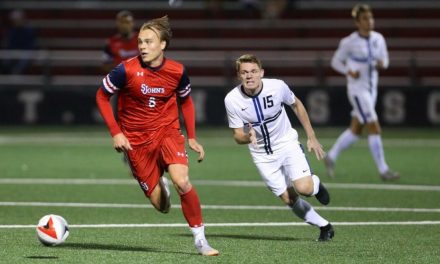