The Hofstra University women created numerous scoring opportunities but could not convert and Ivey Crain scored both goals for William & Mary in a 2-0 Colonial Athletic Association victory at Hofstra Soccer Stadium in Hempstead, N.Y. on Sunday afternoon.

Crain put William & Mary (5-4-2, 1-0-1) on the board when she ran down a long pass from Elaina Lonhjohn and worked her way along the endline into the 18-yard box undefended before slotting a tough-angled shot past goalkeeper Skylar Kuzmich 2:34 into the game.

Crain struck again at 56:20 as Longjohn sent a pass from midfield to Ginny Delacruz on the left side. Delacruz sent the ball across the middle to a streaking Crain, who finished the play for a two-goal lead.

Hofstra returns to action against Monmouth University at 6 p.m. on Thursday. 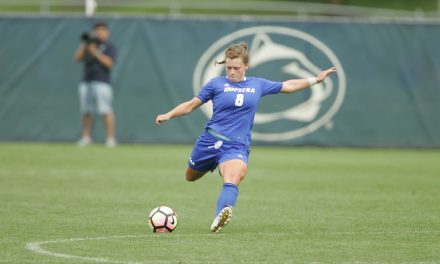