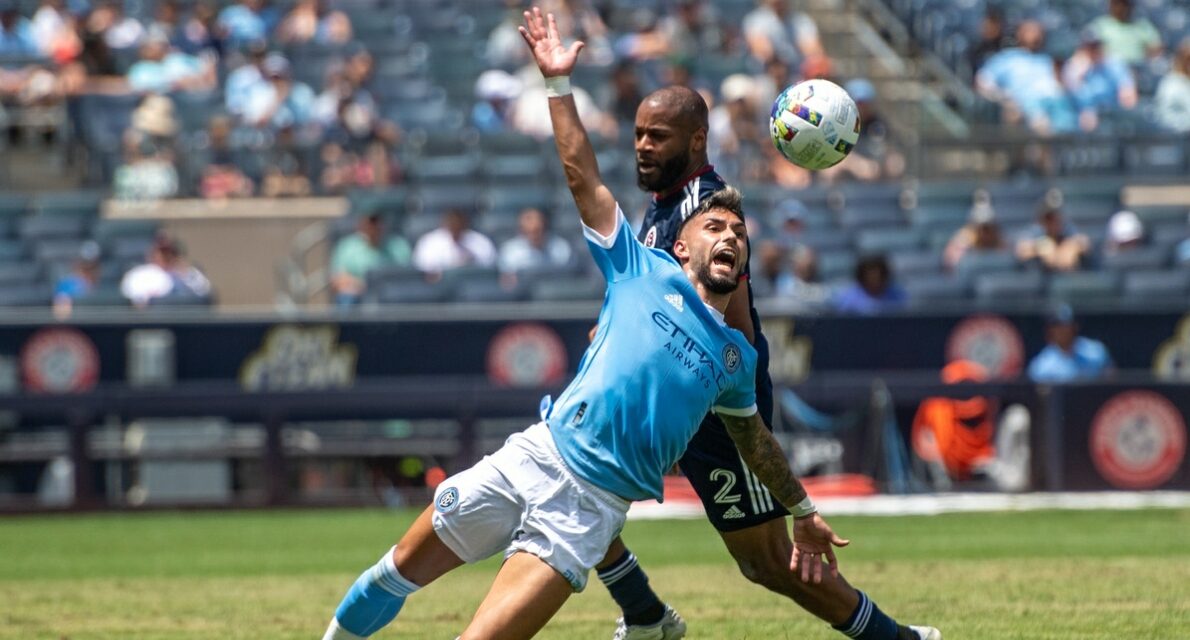 Ford certainly helped City more than a bit on a sunny Saturday afternoon at Yankee Stadium, awarding  three first-half penalty kicks. The Cityzens converted two, which started them to a 4-2 win over the 10-men New England Revolution.

The result snapped Cushing’s five-game winless streak since he took over for Ronny Deila, who departed to direct Standard Liege in Belgium last month. The win moved City (9-4-5, 32 points) into second place in the MLS Eastern Conference over the Red Bulls (32), prior to the latter’s match at FC Cincinnati Saturday night.

Taty Castellanos scored a brace to take over the MLS Golden Boot lead with 12 goals. Talles Magno and Gabriel Pereira also found the net for NYCFC.

The Revs (6-6-7, 25),  who had their 10-game unbeaten streak broken, were forced to play the final 49 minutes of the match a man down after center back Andrew Farrell was red carded in the 41st minute.

Cushing was more concerned about getting a win, period.

“For us, it’s about getting back to winning here at home,” he said. :We have a really good record here, and obviously drew in the previous two games here. Even though we thought we played well, we’re ready to get back to our winning ways. Really happy with the performance today. We created a lot of chances, maybe we could have scored more goals. But to score four at home and to take the three points, we’re happy with that.”

Relive all the action from the BX between #NYCvNE 📼⤵️ pic.twitter.com/tIEBnqEPnU

Goalkeeper Sean  Johnson agreed, although he admitted there was much to improve on.

“It feels good,” he said. :It could be better, I think. Standards are pretty high, so we still have to win a little bit more comfortably, execute our chances, and obviously be a little bit tighter defensively but, I think we’ll take it. I think three games unbeaten we needed a win at home, especially going into a tough week. It’s important that we keep it going.”

The Cityzens had not one, not two, but three penalty kicks called in their favor in the opening half. Those three PKs set an MLS record.

The hosts took a 1-0 edge in the 10th minute as Mango converted a penalty kick after he was taken down in the box by Farrell.

New England equalized eight minutes later. Sebastian Lletget motored down the right flank. Just before he ran out of bounds, Lletget sent a cross to Gustavo Bou, who fired home his fifth goal of the season from seven yards.

“When we turn the ball over, it’s difficult to reduce the spaces,” Cushing said. “I thought in that moment, we just made a few wrong decisions, and in the end there, they got down the side of us, and then you’re trying to put fires out.”

NYCFC was awarded a second PK by referee Timothy after he ruled that Henry Kessler took down Maxi Morales in the penalty area.

As Revs head coach Bruce Arena continued to fume on the sidelines, Castellanos took this one and did a stutter step and stopped. Revs goalkeeper Djordje Petrovic didn’t move and dove to the right to make a two-handed save on Castellanos to keep the game even in the 34th minute.

Ford wasn’t finished doling out penalties. In the 41st minute, he awarded a third to City after Andrew Farrell shoved down Castellanos in the box, much to the open chagrin and disappointment of the Revolution.

This time, Castellanos made sure he didn’t miss as he drilled his try into the right side to lift NYCFC into aa 2-1 lead in the 44th minute.

Playing a man up in the 49th minute, Gabriel Pereira picked the pocket of a Revs player at midfield and rushed toward the visitors’ goal. He fed Castellanos, who split two defenders and had his shot saved by Petrovic, who came out of the net. Pereira gathered in the rebound, moved to his right toward aa net that was guarded by a defender before depositing the ball into the goal for a 3-1 advantage for his fourth goal of the campaign.

Lletget came close to closing the lead to a goal in the 60th minute as his shot from atop the box bounded off the crossbar.

The Revs refused to quit. DeJuan Jones slipped a left-wing pass to Bou, who beat goalkeeper Sean Johnson from close range to close the gap to 3-2 in the 77th minute.

NYCFC gave itself some breathing room in the 82nd minute. Off a counterattack, Thiago Andrade was denied by Petrovic, who again was forced to come out of his net to make a save. Castellanos tapped it into the unattended got for a 4-2 lead.

CINCINNATI BOUND: NYCFC gets $50K in GAM for Robledo