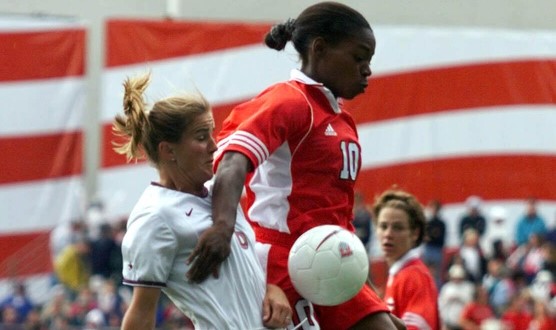 Charmaine Hooper (right), battling Brandi Chastain for the ball in 1999, scored against the USA in 2002. (Robert Hanashiro-USA TODAY)

To celebrate Independence Day, we have a special quiz about the U.S. women’s national team.

What do these names have in common?

They are the only five players on the planet who have scored against the Americans during Women’s World Cup qualifying since 1991.

Yeah, that’s a tough one that even the most astute soccer experts would have difficult connecting the dots.

It is an exclusive club that the U.S. women’s national team would like to see remain at five.

The Americans’ numbers are quite impressive.

Entering the Concacaf W’s Championship on Monday – the tournament serves as the qualifying mechanism for the 2023 World Cup in Australia and New Zealand and the 2024 Olympics in Paris – the U.S. has participated in 33 qualifiers and has conceded but five times.

It should be noted that in the 1991 qualifying tournament, matches were only 80 minutes long, as per FIFA regulations at the time.

Here is a quick look at the five goals

Delia DeSilva has the distinction of being the first player to score against the then defending World  Cup champions squad in the 40th minute of an 11-1 rout over Trinidad & Tobago before a crowd of 1,900 fans in Montreal, Canada.

No other details about the goal were available.

By then, the USA had rolled to a 5-0 advantage.

Up until DeSilva’s score, the Americans had outscored their opposition 63-0 over two tournament (49-0 in 1991). It also snapped their shutout streak at six games and 520 minutes.

DeSilva, however, did not see the end of the match. In fact, she saw red in the 73rd minute. The former Florida International University standout took a swing at Carin Gabarra and a melee erupted. T&T defender Margaret Andem, DeSilva and U.S. defender Thori Staples were red carded. USWNT assistant coach Tony DiCicco – Anson Dorrance was still running the show – was ejected for a reported curse-filled argument with Jamaican referee Charles Barrett, whom he blamed for allowing the game to get out of control.

In case you were wondering, Mia Hamm paced the U.S. with four goals.

Canadian striker Charmaine Hooper scored in first-half stoppage as the Americans recorded a 2-1 win in extratime in the Concacaf Women’s Gold Cup final before 6,911 spectators at the Rose Bowl in Pasadena, Calif.

Tiffeny Milbrett had given the hosts a 1-0 lead in the 27th minute as she beat goalkeeper Karina LeBlanc before Hooper knotted things up against goalkeeper Briana Scurry on a rainy and foggy night.

Hooper’s goal began with a corner kick by Silvana Burtini. Andrea Neil headed the ball to Christine Sinclair, whose shot deflected off Hooper and into the net.

Hamm, who injury her shin in the second game and played sparingly in the rest of the competition, entered the match in the second half and scored in extratime to lift the USA to the win and title.

It should be noted that that the 2003 World Cup originally was scheduled to be held in China before a SARS outbreak forced the U.S. to host it in a rare emergency.

Randee Hermus’ goal in the 45th minute was the lone score for Canada as the USWNT defeated its neighbors to the north on Kristine Lilly’s penalty kick late in extratime in another Concacaf Gold Cup final in Carson, Calif.

Leslie Osborne had given the hosts a sixth-minute lead before the Canadians equalized right before halftime in front of 6,749 spectators. A free kick from Melanie Booth caromed off Marci Miller’s head to Hermus, who scored from 10 yards.

In case you were wondering, Lilly converted her spot kick after Robyn Gayle fouled Carli Lloyd with an elbow a few feet in front of the net in injury time in extratime for the game-winner.

Maribel Dominquez and Veronica Perez scored in the first half to hand the USA its lone WCQ defeat, a 2-1 Mexico victory in the semifinals in Cancun, Mexico. It was the only time the U.S. had allowed multiple goals in a WCQ match.

To put the loss into proper context, the U.S. had outscored its foes in group play, 18-0, and beat the Mexicans in previous qualifiers, outscoring them 26-0.

Dominquez stunned the Americans with a third-minute goal. Forced to play catch up soccer, the U.S. equalized on Carli Lloyd’s goal in the 25th minute before 8,500 fans.

Only two minutes after celebrating, Perez tallied the game-winner for El Tri as she beat goalkeeper Nicole Barnhart off a Juana Lopez pass. The Mexicans managed to keep the U.S. off the scoreboard to clinch a spot in the 2011 World Cup in Germany, forcing their rivals into an intercontinental playoff.

The Americans qualified for the tournament by posting a pair of 1-0 win vs. Italy. They went on to finish second to Japan, which prevailed in a shootout in the final. 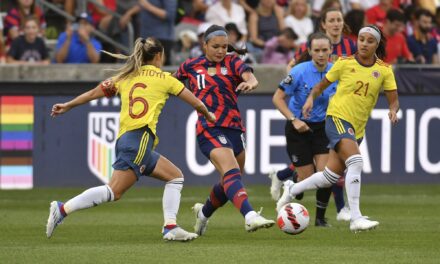 ONE FOR DUNN: A Tifo will be unveiled for USWNT standout at Wednesday’s game