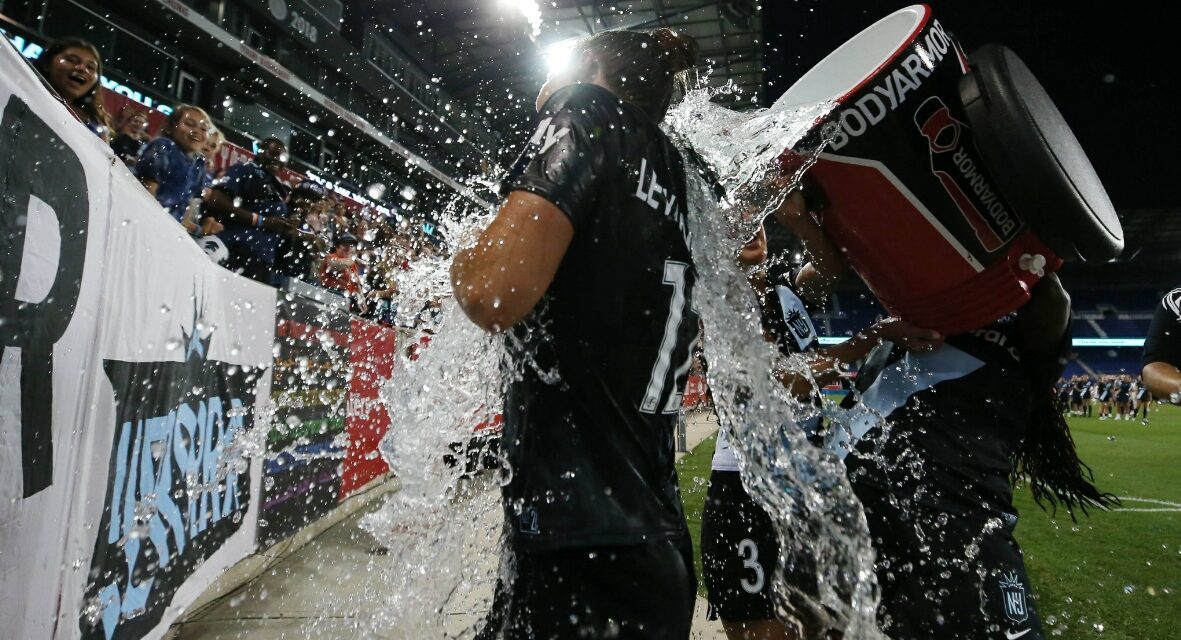 Gian Lewandowski gets splashed with a sports drink after playing her final game with Gotham FC. (Brad Penner-USA TODAY Sports)

The match marked the final National Women’s Soccer League match for Lewandowski, who announced her retirement from professional soccer in June. With a thank you sign in front of Cloud 9, there was a pregame ceremony that included a signed jersey from her teammates, presented to her by owner Ed Nalbandian and general manager Yael Averbuch West while surrounded by family, and “thank you Gina” cheers from the crowd.

“It was just important to go in and enjoy the moment. Be intentional about focusing on the game, executing the plan,” Lewandowski said. “Unfortunately, it didn’t go as planned, but it’s still fun and excited to have everybody here and see us play.”

Gotham FC was on the attack early, with Cameron Tucker ripping a shot right on target at the three-minute mark.

Lewandoski helped make a key stop early on a Red Stars attack but broke through on the 16th minute by Sarah Luebbert. Vanessa DiBernardo scored in the 25th minute, as Gotham FC faced a 2-0 deficit at the half.

Forward Jenna Bike and defender Taylor Smith made their debut for Gotham FC to start the second half. Bike joined this week as a national team replacement, while Smith recently was claimed off waivers from North Carolina Courage.

“I’ve been here like it’s been a week and it’s been great,” Smith said. “It’s been positive. It’s been high intensity. I think the club’s going in the right direction and I’m hoping – especially this upcoming month – that we can get some points and start putting out good performances and getting results.”

Imani Dorsey had a shot on target in the 50th Minute. Lewandowski just missed on a cross in the 61st minute to try and break through for Gotham.

“I will make sure that I’m better and better for them,” Gotham FC head coach Scott Parkinson said. “It’s no fun when you go down like we did.”

Smith fired a shot in the 78th minute that was her best opportunity at a goal. Ella Stevens scored in the 84th minute for the final goal.

Lewandowski was subbed out in the 86th minute, to applause and a hug from Parkinson and teammates.

“The game has brought me so much in my life personally, as I’ve grown so much as a player, but also as a person and just the relationships that I’ve built over time and then going overseas, just the people I was exposed to, all the adventures that I’ve had,” she said. “I’m just really blessed to have a career that I’ve had and just the person who I’ve become these last 15 years through the game, and got me to just be that best version of myself, and I’m really grateful for everybody who’s been a part of it.”

Gotham FC travels to Louisville to take on Racing Louisville FC Friday at 8 p.m. ET. The game will be aired on Paramount+ and streamed live on Twitch internationally.

LOANED OUT: Gotham FC’s Eddy will play for Australian club through March