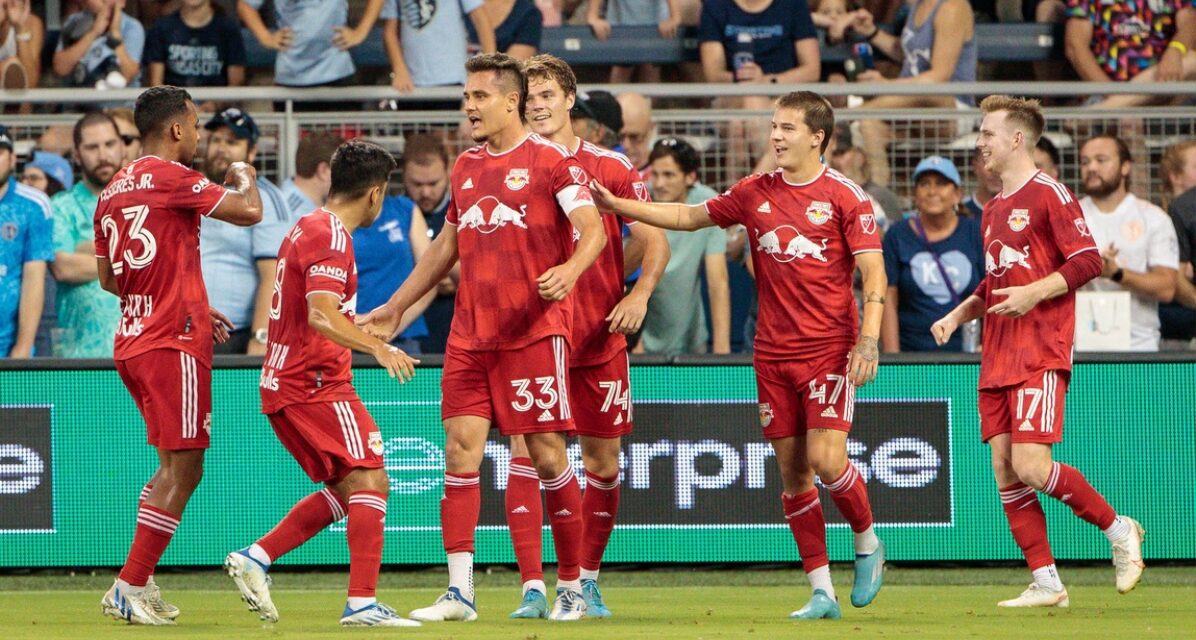 In baseball, there once was an unwritten tradition that teams that are in first place on July 4 would win the pennant or World Series.

We’re not certain if that is the case with pro soccer in North America.

It remains to be seen whether they will wind up as Eastern Conference champions at the end of the MLS season, but the Red Bulls are basking in its glory today.

They moved into the lead via their hard-fought 1-0 victory over Sporting Kansas City at Children’s Mercy Park in Kansas City, Kansas on Sunday night.

The Red Bulls played the final 17 minutes of regulation and 10 minutes of stoppage time with 10 men after Sean Nealis was red carded for a handball in the 73rd minute.

The match was delayed for about a half hour late in the first half due to inclement weather.

“From the technical side, I would say the game was not super sexy to watch,” Red Bulls head coach Gerhard Struber said. “I think we have to be honest with ourselves, I think we find in more directions not always control and it was difficult. Sometimes you have games in the league that you must create a different phase. Today I think my boys showed me in the defensive structure, in the defensive behavior, very good moments, a mindset of a fighter.”

The win boosted the Red Bulls to a 9-5-5 mark and 32 points in the congested conference standings. They lead the Philadelphia Union (30), Montreal CF (29) and New York City FC by the barest of margins. Those rivals have one, two and two games in hand over the Red Bulls, respectively.  Montreal plays at the LA Galaxy on Monday night, so that could spoil things for the Red Bulls if they win.

“They’re a really good team at home,” said Red Bulls captain and center back Aaron Long, who scored the lone goal of the match. “I don’t know if I’ve ever won here with this group since my time. I think our last win we were saying in the locker room was 2014 when Bradley [Wright-Phillips] tied the goal record with 27 goals and the Golden Boot, so it’s been a long time. I haven’t won here with this group. We knew it was going to be tough going into the game and we’re all very happy right now with the three points.”

The Red Bulls spoiled Peter Vermes’ 500th game as a SKC coach across all competitions.

Long tallied in the 53rd minute – his second of the MLS season – as he headed in Lewis Morgan’s right-flank cross past KC goalkeeper and East Islip, N.Y. native Tim Melia from point-blank range.

New York lost midfielder Lewis Morgan to an injury and was replaced by Serge Ngoma in the 66th minute.

Several minutes later, the visitors lost one of their top defenders in Nealis. At first, he was slapped with a yellow card for handling the ball just outside the penalty area in the 68th minute. However, the play was reviewed by VAR and referee Marcos de Oliveira awarded him a red card in the 73rd minute. Nealis had played every minute of every game for New York across all competitions this season.

The Red Bulls were forced to play with 10 men the rest of the match. Nealis will be lost to the team for next Saturday’s game vs. FC Cincinnati.

Sporting had the ball in the New York end for most of the remaining minutes. Five minutes into added time, John Tolkin cleared a cross off the goal line with the Red Bulls playing 9 v 11 on a corner kick with Patryk Klimala off the field temporarily with an injury.

The Red Bulls defended well enough to keep the ball out of their net.