SOME WORDS OF WISDOM: Scurry: USWNT must crush its foes at the World Cup, Olympic qualifiers 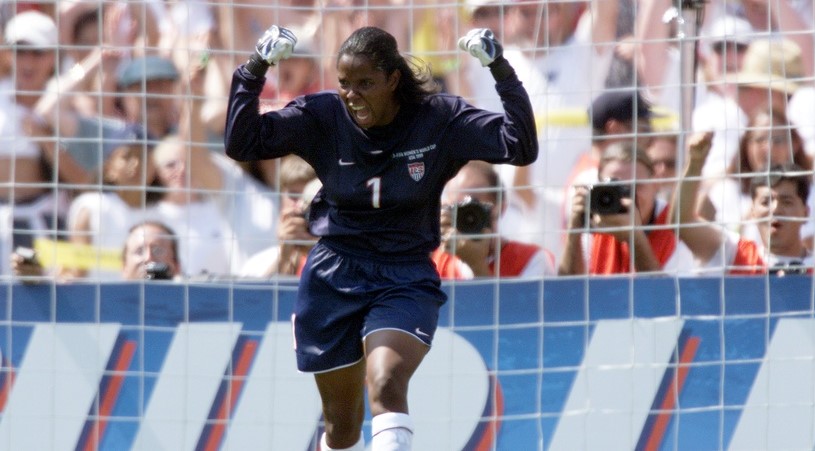 Briana Scurry celebrates after making a key penalty kick save in the shootout in the 1999 Women’s World Cup final win vs. China. (Robert Hanashiro-USA TODAY)

As the U.S. women’s national team puts in its final touches in preparation for the Concacaf W Championship, Briana Scurry has some advice for her former side:

Score early and score often and be relentless and ruthless.

“What I think Vlatko [Andonovski, head coach] should do is throttle down,” the former USWNT goalkeeper said recently. “I mean crush every opponent. Be merciless, ruthless, just fangs sharpened and just rip that entire tournament. Just annihilate. That’s what I would recommend because you really don’t even take a chance. Just have the result put to bed by halftime, every game. That’s what I would do if I were him.”

Scurry, who backstopped the USWNT to the 1999 World Cup title and to the 1996 and 2004 Olympic gold medals, used the Americans’ 13-0 triumph over Thailand in their opening match of the 2019 Women’s World Cup.

“A lot like people were like, ‘It was so mean. I was like, what? They should have got 15,” she said. “I’ve been in the arena, and you do not let up. You throttle down. And if you can beat a team by 21 goals, then you beat them that way.

“It teaches them the expectation if they want to come into this arena with a international multi-champion, then you’re going to get in multi-champion treatment. And it helps you understand okay, ‘We’ve got some work to do with our program.’ ”

One key to the U.S.’s success since entering international competition in 1985 has been its ruthlessness.

“It’s literally born from training and obviously born from the beginning of the national team existence with Michelle Akers, for example,” Scurry said. “She was ruthless and talking about how to go about doing things with players. I mean, not only do you set an example for the team that you’re playing at the time, that you are doing the mentality thing, it’s an intentional mentality. You go in there to win at every element of the game, and you do not let up until the last whistle blows.

So much is at stake in Monterrey, Mexico. The four semifinal teams will earn a World Cup spot. The champion also will book a berth at the 2024 Paris Olympics, two years prior to kickoff. The second- and third-place finishers will battle for the second confederation Olympic berth in a special playoff. This is the first time Concacaf has held both qualifying competitions at the same time.

The USWNT has defined international success at the women’s level. Not only has the four-time world champion and four-time gold medalist USA qualified for every World Cup and Olympic tournament, but it has also failed to reach the semifinals only once – at the 2016 Rio Summer Games.

And failure to reach the tournament in Australia and New Zealand next year? Why perish the thought, Scurry said.

“I mean that is that is a blow that would be hard for a federation to recover from,” said Scurry, who will be a commentator on Paramount+ during the tournament. “So, let’s not even don’t even damn dabble in that pool.

“I mean, it’s vital, because if heaven forbid, they didn’t qualify, so much for that record of winning something every cycle. It would really set us back.”

A cycle is a World Cup one year, followed by an Olympics the following year. The only aberration was during the recent cycle. The Americans secured the 2019 world championship but had to wait a year to compete in the Summer Games due to the COVID-19 pandemic. They won a bronze medal at the 2021 Tokyo Olympics.

“We have been running on all cylinders out of the gate since the mid-80s,” said Scurry, whose memoir, new memoir, My Greatest Save: The Brave, Barrier-Breaking Journey of a World-Champion Goalkeeper, written with Wayne Coffey, was published last month. “It’s been a train that has flown down the track and smashed everything in its path. This is the first time that Concacaf for the women’s side had two things on the line at the same time. I know in Europe they’ve done that with: you don’t make the World Cup or make a certain level of placement in the World Cup you don’t play in the Olympics. That is just mind boggling to me.”

The USA kicks off the tournament against Haiti on Monday, July 4, followed by Jamaica on July 7 and Mexico on July 11. The top two teams from the group will advance to the semifinals.

“It’s going to be thrilling to see it from a broadcasting point of view,” Scurry said.

SOME FACTS AND FIGURES: For the USWNT for its Summer Series