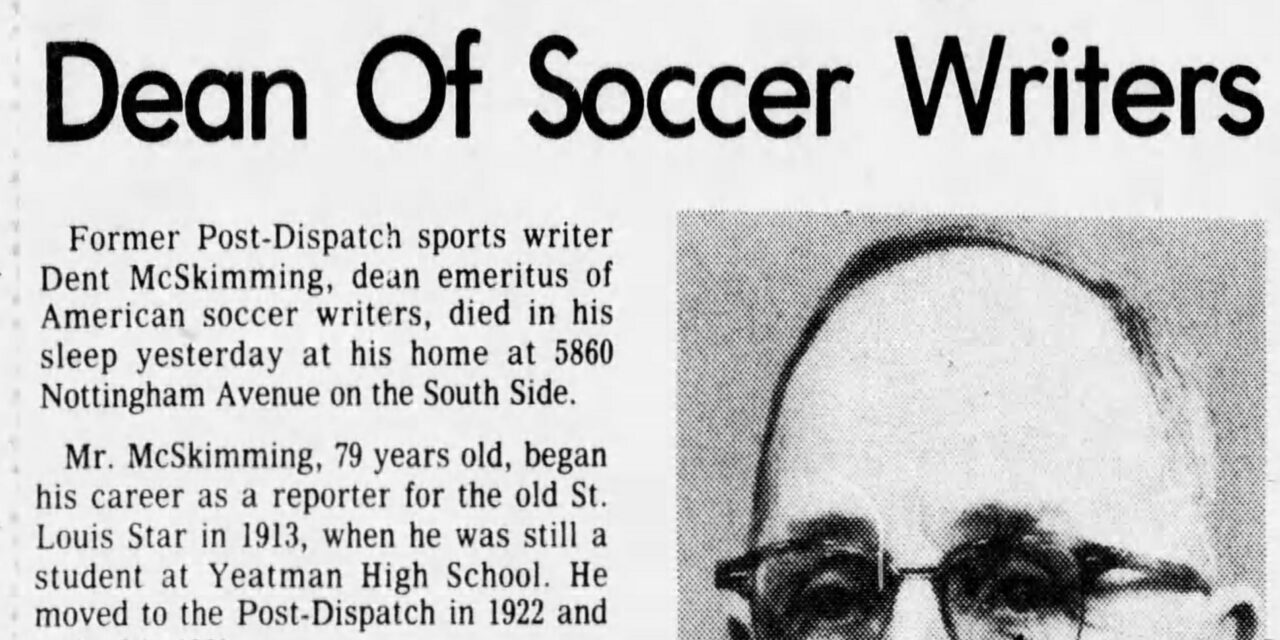 As a writer and a historian, I love to delve into the back story of history and stories.

Well before I became a soccer writer, history/social studies was among my favorite classes in high school and college. The Revolutionary and Civil Wars topped my favorites.

And of course, that includes sports and soccer.

Which brings us to the St. Louis Post-Dispatch’s Dent McSkimming, the lone American sportswriter to attend the USA’s 1-0 upset of England at the 1950 World Cup in Belo Horizonte, Brazil.

However, he didn’t cover it. Well, at least not what I have researched.

I won’t take a deep dive into McSkimming’s situation because I would only be duplicating the fine efforts of Stefan Fatsis, who wrote an excellent detailed story about the writer for Slate in 2004.

There was no byline story by McSkimming in the Post-Dispatch the next day as the newspaper ran a short article from United Press about the match. In fact, there were no stories by McSkimming in the paper from Brazil. Fatsis had several theories, that the writer journeyed to Brazil on vacation and that he was mad at his newspaper because they did not pay his way.

Here is the link to his story to get further details:

According to Fatsis and my research, McSkimming did not have a bylined story about the match the next day, or any time after that.

He did, however, write a story about six St. Louis players and residents in the July 16 edition of the newspaper, a good two weeks after the event. Even though news was slower to get out way back in the day, that is a long time. McSkimming might have spoken to those six individuals after they returned home.

Here is some of what they said:

* Charles Colombo: “Everybody wants to know just how it happened. I just tell them we won because we scored a goal and then tied them up so they couldn’t get through us.”

* Harry Keough: “I don’t mind saying we were almost sorry to beat the English team that day in Belo Horizonte. We felt it was going to be a terrible blow to them, and we knew we were not yet strong enough to win the championship. But we beat them in the last five minutes, came close to make it 3-0 instead of 1-0.”

* Goalkeeper Frank Borghi, who was carried from the field by fans after the game: “When that mob came at me, I didn’t know what to expect. I’d heard a lot about the strange behavior of Brazilian fans, so I tried to duck for cover. But there was no cover anywhere and they won the race. It was a thrilling experience. My goal was at the far end of the field from the dressing, so they carried me about 150 yards.”

* Frank Wallace on how defender Alf Ramsay (coach of the 1966 England team that won the World Cup) denied him a goal in the closing minutes: “If I had hit the ball just a triple harder, Ramsay would never have touched it.”

* Reserve Bobby Annis on tactics: “I saw a lot in the play of the fullback who faced our team. I think I should be a better player for the experience.”

* U.S. Soccer Football Association president Walter Giesler: “But it’s difficult enough trying to explain how we beat England. If we had whipped Chile, too, the job of telling how and why would have exhausted our boys.”

While many fans and observers know about McSkimming’s history with the beautiful game, he reported on and wrote about other sports as well.

He also covered baseball, billiards, boxing, horse racing and hockey. While researching the story, this writer noticed that he covered the old St. Louis Browns, including road games.

According to McSkimming’s obituary in the Post-Dispatch on July 14, 1976, St. Louis University dedicated its championship program to the writer when it hosted the 1962 NCAA tournament. That was a year after McSkimming retired.

His obituary said that McSkimming often was “teased for his style of covering soccer games.” On many occasions he retreated to the far corners of the upper stands, far from other writers and fans. However, he insisted he was not anti-social, the newspaper said.

“I couldn’t cover a game while listening to a political argument, baseball discussion or anything else,” he was quoted by the Post-Dispatch, “because turn your head a second and you’ve missed what could be important action.”

The movie about that historic U.S. team and game originally was called The Game of Their Lives, based on the book by the same name, authored by Geoffrey Douglas. It eventually was released on DVD as The Miracle Match.

The film was panned (Rotten Tomatoes gave the film a score of 26 percent based on reviews from critics and an average rating of 4.6 out of 10 – https://www.rottentomatoes.com/m/le_match_de_leur_vie).

The problem with a movie is that millions people watched it and believed everything in it, even though it had several historical inaccuracies in it (that is another story for another time).

Film makers took liberties with McSkimming’s life as he was featured in the 2005 film. In fact, they had him (played by actor Patrick Stewart) attending a D.C. United game in which the surviving members of the team were honored in 2004 while he remembered what transpired so many decades prior, although he passed away at the age of 79 on July 13, 1976.

He should have been treated better than that.

I guess that they’ll even bring back the dead for a Hollywood ending.