SHOOTOUT AT THE TQL CORRAL: NYCFC rallies from 3 down to draw at FC Cincy 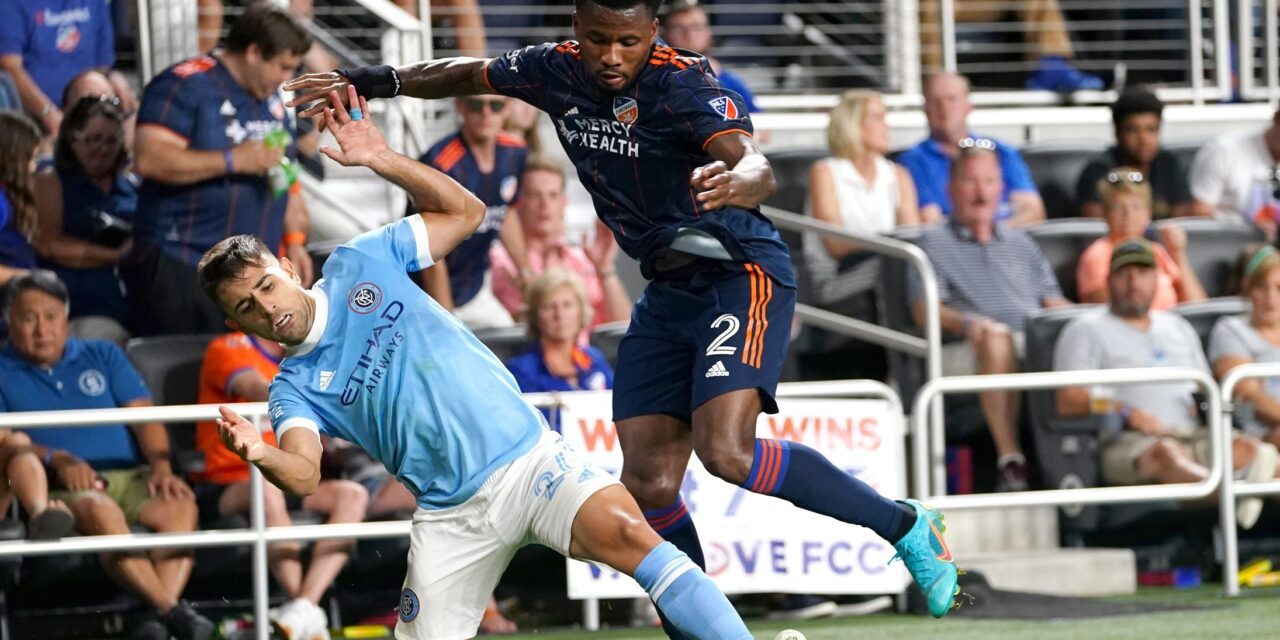 If you need some video to sell soccer to the masses in this country, just use New York City FC’s wild 4-4 draw at TQL Stadium in Cincinnati on Wednesday night.

The match had just about everything you would want in a soccer game and perhaps more.

The home team bolting to a three-goal lead. The visiting side missing a penalty kick before staging a historic rally to knot things up before halftime and taking the lead before the hosts managed to secure a point.

Yes, it was that good.

After the match, NYCFC interim head coach Nick Cushing had a quick chat with his FC Cincy counterpart, Pat Noonan.

“The one thing that I said to him was, if you bought a ticket to this game, you’ve got your value twice over today,” said Cushing, who is still winless as coach (0-2-2) after taking over for the departed Ronny Deila. “As coaches that’s not what we want, but that’s what I believe. For every person that bought a ticket to come to this game, today that they definitely got their ticket price.”

NYCFC had one foot tied behind its back entering the match because striker Taty Castellanos did not make the trip to Cincinnati because he was feeling ill. Things got more complicated in the 24th minute when center back Maxime Chanot, racing for the ball on Cincy’s second goal, slammed his left leg into the right post and was forced to leave the game. Justin Haak entering in his place and Alfredo Morales dropping into the defense.

Luciano Acosta lifted the hosts into a 1-0 lead in the 15th minute before Brazilian forward Brenner, who finished with that hat-trick, tallied in the 24th and 30th minutes for a commanding three-goal advantage.

NYCFC has given up nine goals in its past three matches, which certainly doesn’t bode well for the reigning MLS Cup champions if they want to repeat.

“We need to be a little bit more compact when we don’t have the ball,” Cushing said. “We’ve turned the ball over a little bit too cheaply at times, which makes it difficult for us to be compact because we keep giving the ball away. And maybe that’s a transition between games and coaches.”

Added Heber, who finished with a brace: “We cannot give three goals so quickly. But we have experience in the team and the leaders try to push up the kids and work together to turn over.”

Life went from bad to worse for City in the 34th minute when Maxi Moralez’s penalty kick was saved after a Tyler Blackett handball in the box. It appeared NYCFC was doomed to a loss. But during an amazing seven-minute span from the 45th minute to the seventh minute of first-half injury time, City found the net three times.

Talles Magno pulled one back with a back-heel finish in the 45th.

Talles hits back before the break with his fourth of the season 🎩🪄 pic.twitter.com/2FRmkMWPS6

Two minutes later, Moralez authored the first of two Heber goals and duplicated his effort seven minutes into added time with the Brazilian striker, who headed the ball home for a 3-3 deadlock at the interval.

NYCFC became the first MLS team to come back from a three-goal deficit, no mean feat.

H9 PUTS US BACK IN TOUCH 🤙 pic.twitter.com/7IlwQFrivn

“I think I scored in there in the right moment, because we were close to the halftime,” Heber said. “When the score was 3-0, they think the game was was done. But our team never gives up. That’s why we reached the title last season. That’s why we are up in the table this season.”

AS YOU WERE ‼️ pic.twitter.com/wJiZU1YsM8

“I don’t have words to explain the what Maxi means for this team, especially for me,” he said. “Since my first day we have had an amazing connection. He and his family helped me a lot the time was off [injured]. He is our leader. He is our brain inside and outside of the pitch. You can see when the game is no easy, you can give the ball to him. He finds the right the right person. He finds the right pass. He gives assist, he scores goals.”

The teams were far from finished.

Gabriel Pereira scored from the top of the box to give NYCFC an stunning 4-3 lead in the 52nd minute.

Brenner, however, equalized off a long-range effort in the 70th minute for yet another first. He became the first player to record a hat-trick in FC Cincy history.

Not one, not two, but THREE goals for @09brenner. 👏 pic.twitter.com/kFH2qLbo7B

The Brazilian forward, however, thought he had given FC Cincy the lead in the 89th minute, putting in a rebound. However, he was ruled to be offside after a VAR review.

So, incredibly, given how many goals were scored, the final 20 minutes were barren in was the game of the year, at least up until now, in MLS.