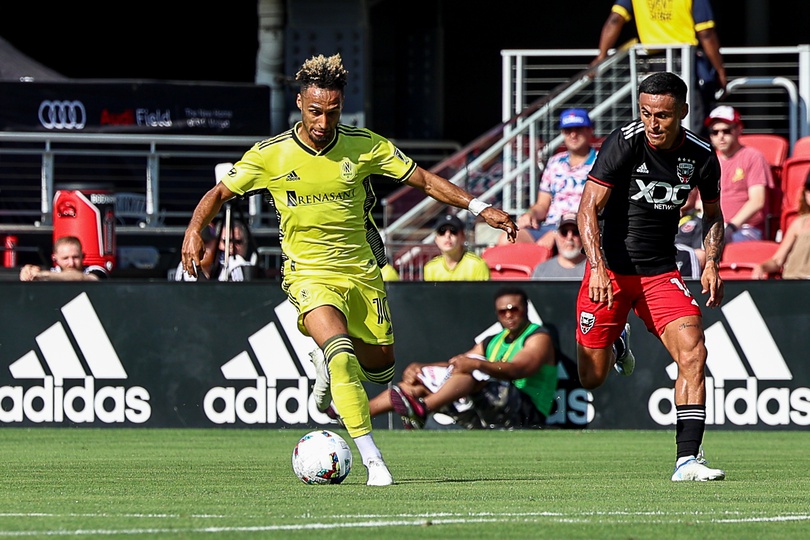 Nashville SC midfielder Hany Mukhtar was voted the Major League Soccer Player of the Week for the 16th week of the 2022 MLS season, the league announced Monday.

Mukhtar recorded a brace for the third time this season in Nashville’s 3-1 road victory against D.C. United (Watch Highlights from His Performance Here). His eight goals on the season are tied for the fourth-most in the league and his 13 goal contributions are tied for the MLS lead. Mukhtar’s performance marked the eighth time he has scored multiple goals in a game, which is the most in MLS since joining the league in 2020. Of Nashville’s 22 goals this season, Mukhtar has scored or assisted on 13 of them (59.1%).

With Nashville leading 1-0 in first-half stoppage time, Mukhtar forced a turnover in the midfield that sprung a counterattack led by the charging Dax McCarty. McCarty received a pass into the 18-yard box and wisely played the ball across to Mukhtar, who placed it into the open net for the second goal of the game (Watch Here). In the 50th minute, the German bagged his brace when he played a give-and-go with Randall Leal, dribbled to produce just enough space and struck a shot that deflected off a defender as well as the crossbar before landing in the back of the net ( Watch Here).

Since the start of 2021, Mukhtar leads all players with 41 goal contributions (24 goals, 17 assists), which is five more than the next player (NYCFC’s Valentín ‘Taty’ Castellanos). Additionally, Mukhtar’s 24 goals are the third-most in MLS during that span and he is the only player with at least 20 goals and 15 assists. Of the German’s 49 career goal contributions, 25 of those have come on the road, which is also a league best since 2020.

Nashville will look to win consecutive games when they return to GEODIS Park to face the Portland Timbers on Sunday, July 3 (8:30 p.m. ET, MLS LIVE on ESPN+).

The MLS Player of the Week presented by Continental Tire is selected each week of the regular season through both media and fan voting in a process conducted by MLS Communications. A panel of journalists from the North American Soccer Reporters comprises 75 percent of the vote, while a Twitter fan vote represents the remaining 25 percent of voting. NASR consists of members of print, television, radio and online media.

SOME HOME COOKING: MLS Homegrowns to take on Mexico U-20 champions Tigres