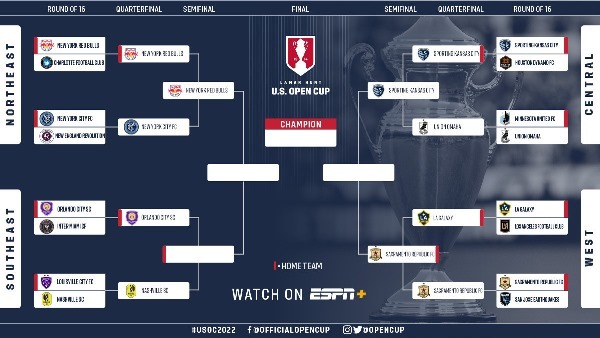 The draw to determine the semifinal hosts and hosting priority for the Lamar Hunt U.S. Open Cup final resulted in lone second-division side Sacramento Republic FC winning the right to host Sporting Kansas City (MLS) in the West semifinal, while the East semifinal will see Red Bulls (MLS ) hosted by the winner of the last quarterfinal to be played between Orlando City SC and Nashville SC (both MLS).

Both semifinal matches will be played on July 27 on ESPN+.

Immediately after the semifinal hosts were confirmed, the draw to determine the hosting priority for the final was held. All four potential finalists were drawn at random to set the priority ranking. The Orlando-Nashville winner received first priority to host the September final should one advance.

Second priority went to Sporting KC, followed by the Red Bulls and, in fourth spot, Sacramento, which will not be eligible to host the final.

Full event details for the final will be announced at a later date.

Orlando City hosts Nashville SC next Wednesday, June 29 (7 p.m. ET on ESPN+) with the winner punching its ticket to complete the semifinal field. This is the deepest run in the competition for Nashville since the team began play in the second division in 2018.

For Orlando City, this is the club’s fifth journey to the quarterfinal round dating back to its Division II days (2011-14). A win for Orlando would see the Purple Lions qualify for the semifinal stage in consecutive Open Cups as the club also reached the final four in 2019, the last time the competition was held in full due to the COVID-19 pandemic.