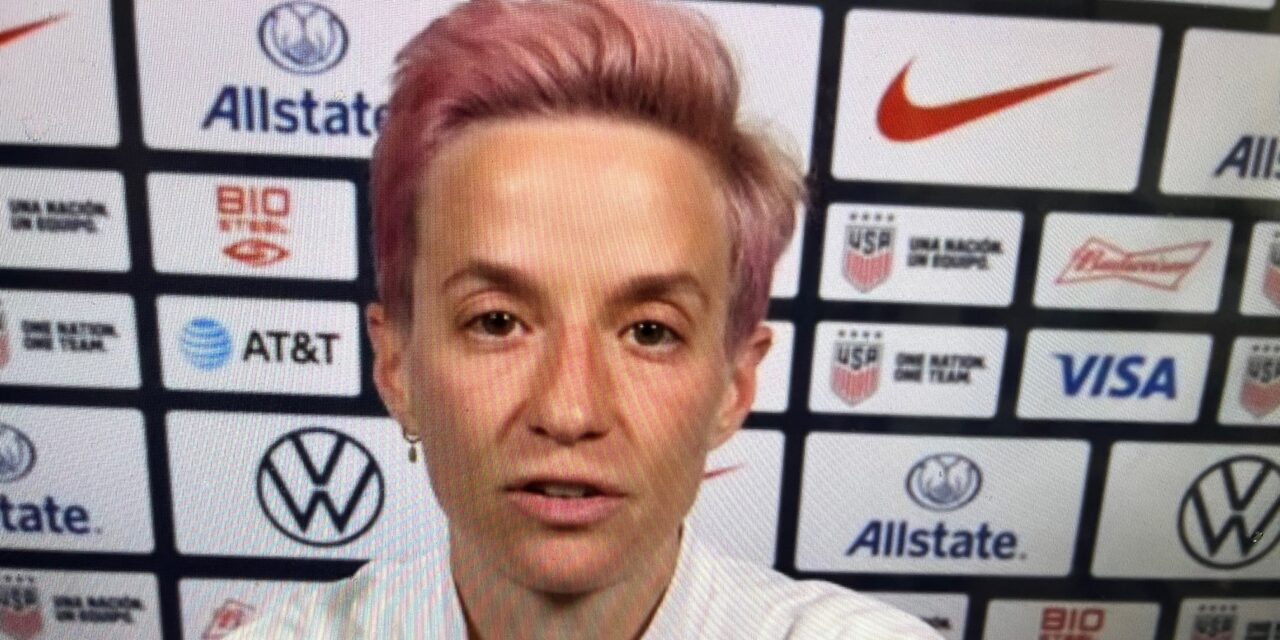 Megan Rapinoe on Zoom talking to the media on Friday: “There are an infinite amount of reasons why a woman chooses to do what she does with her body, none of which are anybody else’s business.” (FrontRowSoccer.com Photo)

Calling it a “sad” and “scary” day, U.S. women’s national team standout and an emotional Megan Rapinoe said Friday’s Supreme Court ruling to overturn Roe v. Wade will have chilling effect, not only over women’s rights to choose and have autonomy of their bodies but on the LGBTQ communities as well.

While wiping tears from her eyes several times while speaking to media members on a Friday afternoon Zoom call, Rapinoe lambasted what she called a disheartening, misguided and out of touch decision by the highest court in the land.

“There are an infinite amount of reasons why a woman chooses to do what she does with her body, none of which are anybody else’s business,” she said in a nine-minute statement. “It’s just so disheartening and so sad because some people will be okay. But most people will not. Most people are not in a position or have the resources or whatever the case may be to protect themselves.

“So to have the entirety of the U.S. government say to people’s faces say to women’s faces, we do not care, we are going to force our belief system, which is deeply rooted in a white supremacist patriarchal Christianity. We are going to force that upon you.

“First of all, your religion is a choice, and it is a belief that you have. It is not my belief, and it is not many people’s beliefs, and it certainly is not the law of the land and it’s certainly in the context of Roe v. Wade, is not the will of the country and that has been explicit for so long.

In a landmark decision in 1973, the Supreme Court established that abortion was legal through the United States. Since then, the make-up of the court has changed drastically.

“The makeup of the court is ill equipped to handle this kind of decision,” Rapinoe said. “Frankly, a majority male court making decisions about my body or any other woman’s body is completely misguided and wildly out of touch with the desires of the country, the will of the country and the will of the people and I think are acting incredibly irresponsibly and inappropriately.”

Rapinoe, who has been openly gay since 2012, felt American women have faced “a constant, unrelenting, violent tide” against them.

“I say this all the time, but pro-choice means that you get to choose,” she said. “Pro-choice allows other people to be pro-life. If that is what works for them or that is what their beliefs are or if that is where they’re at in their life. Pro-life doesn’t allow anybody to make a choice. Obviously, you can understand from an individual perspective how difficult it is to live in a country where you have a constant, unrelenting violent I tide against you and onslaught as a as a woman. And it would be as a gay person and as a non-binary person, as a trans person, whoever this is going to affect because it affects a lot more than just women or ciswomen. It really does affect us all.”

The 36-year-old USWNT forward understood that “the lack of abortion does not stop people from having abortions.”

“It stops people from having safe abortions,” she added. “I would encourage people to understand all of the different aspects that overturning Roe v. Wade will have actually on everyone in the entire country. I just can’t understate how sad and how cruel this is. I think the cruelty is the point because this is not pro- life by any means. This way of thinking or political belief is coupled with a complete lack of motivation around gun laws. It comes with pro-death penalty. It comes with anti-health care, anti-prenatal care, anti-child care, anti pre-K, anti-food assistance, anti-welfare, anti-education, anti-maternity leave paternity leave. This is not pro-life.

“It’s very frustrating and disheartening and frankly just infuriating to hear that be the reason that people are wanting to end abortion rights and this vital aspect of a woman’s, not only health care and general like basic safety in this country, but her bodily autonomy and the right to freedom and the pursuit of happiness and liberty is being assaulted in this instance. And it’s just incredibly disheartening.”

Rapinoe, who is in USWNT camp preparing for the first of two international friendlies against Colombia in Denver, Colo. on Saturday, stressed that the decision won’t affect her as much as other women. She is married to Long Island native and WNBA all-star Sue Bird.

“I would just encourage people to try to understand the intersectionality of this. I am a cisgender, rich white woman that lives in two of the most progressive cities in the world with the protection of not only myself and my resources, but this resources and this protection as all of my teammates, but not everyone is afford that,” she said, grabbing her U.S. Soccer warm-up uniform that said STATES.”

The Golden Boot and Golden Ball winner at the 2019 Women’s World Cup for the champion USA, Rapinoe said the affects will be felt by other groups of women.

“We know that this will disproportionately affect poor women, black women, brown women, immigrants, women in abusive relationships, women who have been raped women who and girls who have been raped by family members who, you what, maybe just didn’t make the best choice and that’s no reason to be forced to have a pregnancy,” she said. “It will completely exacerbate so many of the existing inequalities that we have in our country. It doesn’t keep not one single person safer. It doesn’t keep not one single child safer, certainly and it does not keep one single, inclusive term, woman safer.

Rapinoe ended her long statement claiming that someone’s strict religious beliefs should not be inflicted on the rest of the country.

“Pro-life does not allow anything other than one very strict religious view and belief system to be forced upon everyone else,” she said. “This will obviously have very wide-ranging effects when it comes to racism and transphobia and homophobia and inequality and will exacerbate so many of the existing issues that we have in our country.

“Particularly as we come out of COVID, as the economic situation will likely continue to deteriorate for so many people, it’s a really sad day. It’s a really hard thing to deal with for all of us. I encourage people to take a step back and come from a place of compassion and humanity and understand that just because I believe something doesn’t mean everybody else has to. We all get to make our own choices. But ultimately we need to come from a place of love, respect and autonomy to do what we feel is best for us.”