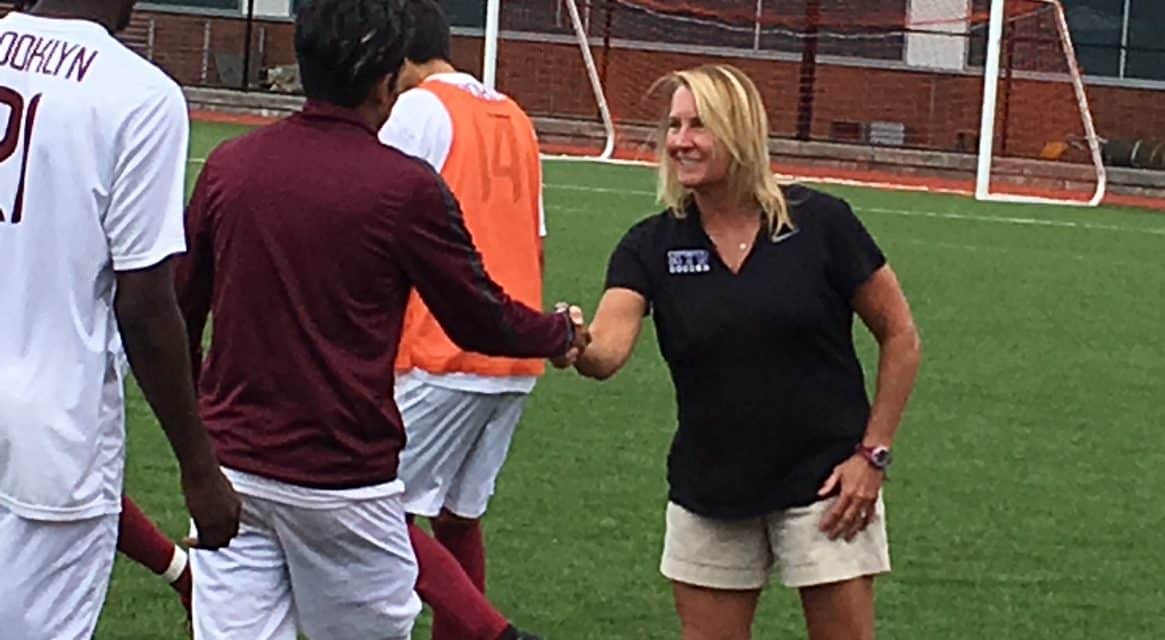 Kim Wyant: “Having one and having success has hopefully made it easier for administrators to open the door to other females who happen to be qualified. I feel good that we’re moving in that direction.” (FrontRowSoccer.com Photo)

The game is some five months away, yet its significance cannot be diminished.

On Friday, Oct. 28, New York University will host the University of Chicago in a men’s soccer match.

It will be one of dozens, if not, hundreds of soccer matches that weekend. But this game will have its own noteworthiness as it will pit women head coaches directing men’s teams against each other – most likely for the first time in in college athletics.

Kim Wyant guides the NYU squad, while Julianne Sitch recently was hired to coach Chicago. Both teams compete in the University Athletic Association.

Wyant, who took over the Violets’ reins just prior to the 2015 season, has been involved in a number of women’s soccer firsts. She backstopped the first U.S. women’s national team game in 1985 and made 16 international appearances. Wyant also guarded the Long Island Lady Riders net for two W-League championships (1995 and 1997) and coaches Brooklyn City FC (Women’s Premier Soccer League).

“Now there’s another female head coach because there was already one,” Wyant said in a recent interview. “Having one and having success has hopefully made it easier for administrators to open the door to other females who happen to be qualified. I feel good that we’re moving in that direction. It’s been from from one year to the next. It’s been literally a 100 percent increase in the number of women coaching in the NCAA soccer world.

“The historic nature of this game, and maybe I’m overstating it, it’s just a Division III soccer match, but it’s got to be the first time that you’ll have two female head coaches coaching against each other in NCAA soccer, Division I, II or III on the men’s side.”

The number of women who have been head coaches in college soccer has been limited to a select few. The exact number is not available. Sitch, a former member of the Sky Blue FC team that captured the 2009 Women’s Professional Soccer title, was hired by UC on April 20. She has extensive playing and coaching experience. At DePaul University, Sitch set school career records in goals (32), assists 26) and points (90). She also played professional with the Chicago Red Stars, Western New York Flash, Atlanta Beat, Melbourne Victory (Austria) and Hammarby IF and Balinge IF (Sweden).

Prior to interviewing for the Chicago job, the 38-year-old Sitch sought out Wyant for advice.

“How were her experiences?” Sitch said. “I know how she walked into that situation there. How great is this? What do you love about it? We had some really good conversations, and it was inspiring to speak with her, was inspiring to see her success at NYU.

“When I was looking more and more into this, I’m like, this is amazing. I have an unbelievable role model to speak with to. I can continue down this road, inspiring other women to step into these roles or to step into apply for a job that they’re thinking. She really did that for me and really helped me in that in that sense and inspire me. I hope to do the same for other women.”

Sitch got the job.

“I know that there’s a lot of good candidates for this job,” she said. “So I feel very fortunate to be in this position.”

Both programs have enjoyed success in recent seasons, so the October confrontation has the potential to be a memorable one.

Wyant has guided NYU to a 54-46-11 record as the Violets have reached the postseason five times. That includes an 11-6-1 record and an NCAA Division III berth in 2021. The team reached the second round.

“It’s going to be a great game,” Wyant said. “It’s always a good game between the University of Chicago and NYU. It’s a big match, a big conference match. the Chicago men’s program perennially goes to the NCAA. They made it to the final four last year. So, they’re a really, really good team. I think it’s wonderful. I hope that a lot of people have an interest in this match.”

“It’s really neat. It’s really cool,” she said. “I am sure Kim, too we’re going to approach in the sense that it is it’s a game to us, right? It’s a game or preparing our teams to be to go out there and be at their best, you know, to win and however,

“It is a very historical moment, so I think there is something special within that. But I also think just it is a game that we’re going out and putting our best foot forward for our teams to compete.” 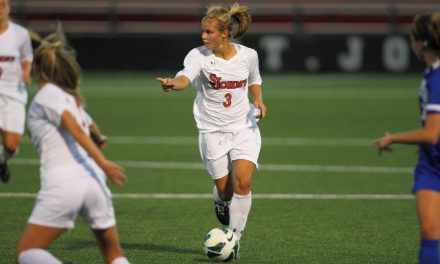 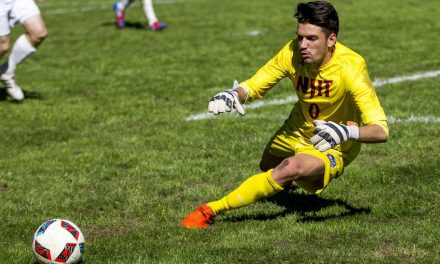