U.S. Soccer has determined the matchups and schedule for the third round of the 2022 Lamar Hunt U.S. Open Cup as the draw took place on Friday.

Set to take place April 19-20, the third round pits the 31 winners that advanced from this week’s Second Round action against 17 lower seeded Division I (MLS) clubs. All 24 Third Round games can be seen live on ESPN+.

Among the 24 third round contests, a handful of matchups stick out for their potential to deliver rivalry drama or the chance to continue underdog runs. In the Northeast Region, FC Motown (NPSL) – one of only two amateur teams left in the competition – will travel to Rochester, N.Y. to take on Division III pros Rochester New York FC (MLSNP). Similarly, North Carolina Fusion U23 (USLL2) will travel to face Richmond Kickers (USLL1), former U.S. Open Cup champions in 1995, in a tilt between an Open Division side and a Div. III pro club.

American soccer icon Landon Donovan will return to the stadium that boasts his statue outside its gates when he leads San Diego Loyal SC (USLC) up the I-5 to visit LA Galaxy (MLS) at Dignity Health Sports Park.

With more than two-thirds of participating MLS clubs entering at this stage (one round earlier than in previous years), the 48 third round participants were pooled geographically into groups of four or six teams each, with the 31 second round winners and 17 Division I clubs distributed as evenly as possible among the groups

Once the geographic groups were established, a random draw determined the pairings within each group, with all Division I sides paired to face a Second Round winner.

The Third Round winners will be joined by the remaining eight Division I (MLS) clubs in the Round of 32 on May 10-11. The Round of 32 Draw to determine the exact matchups will be held Friday, April 22.

THE CHASE FOR THE CUP

The First Round of the 2022 U.S. Open Cup took place between March 22-23, with an even distribution of teams from various leagues punching their ticket to the next stage. Teams from the Local Qualifying track advanced in five instances, while the same number of USL League 2 clubs also earned the right to move on. The NPSL did one better when six of its teams qualified for the Second Round, which saw the introduction of pro teams.

Clubs from professional Div. III leagues USL League One and NISA as well as Division II (USL Championship) did very well against the 16 Open Division (amateur) sides in the Second Round, winning 29 of 31 matches, but were not immune from “cupsets” as North Carolina Fusion U23 (USLL2) and FC Motown (NPSL) both beat Div. III pro sides to reach the Third Round where one of those two teams could earn the $25,000 award for being the amateur team to go farthest in the tournament.

The 2022 U.S. Open Cup winner will earn $300,000 in prize money, a berth in the 2023 Concacaf Champions League and have its name engraved on the Dewar Challenge Trophy – one of the oldest nationally-contested trophies in American team sports – now on permanent display at the National Soccer Hall of Fame in Frisco, Texas. The runner-up will earn $100,000, while the team that advances the farthest from each lower division will take home a $25,000 cash prize. Atlanta United of MLS are the reigning U.S. Open Cup champions, having won the crown in 2019, the last year the tournament was held before a two-year hiatus due to the COVID-19 pandemic. 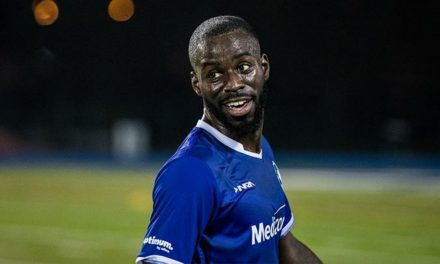 COMPACT COMPETITION: Open Cup will have 24 teams, instead of 101, due to COVID-19, congested schedule