MASSAPEQUA PARK, N.Y. – After watching N.Y. West Indies United recorded a 5-0 win over Baldwin to capture the Over-40 Gillen Cup on Sunday, you might wonder why the team hasn’t gone undefeated in the Long Island Soccer Football League this season.

The team was that dominant at John J. Burns Park.

West Indies United Indies leads the O-40 Division with a 8-2-0 mark and 24 points, but it seemed it could very little wrong in the cup final, except for missing a penalty kick in the 36th minute.

“The game was very good game,” West Indies captain Jean Ade said. “We’ve been prepared for this game. We said we need to win all three tournaments, the League Cup, the regular cup and the State Cup because last year there wasn’t a tournament.”

West Indies United is accustomed to adding hardware to its trophy cabinet.

“We’ve been in this league for a long time,” Ade said. “We’ve won over 10 finals. We lost only one final over 11 years. We just decided we’re going to come back and win everything.”

The first of three possible trophies were secured on Sunday.

It didn’t hurt that the champions were helped by the fact Baldwin played the opening half hour or so with only nine men. By then they had taken a 1-0 lead in the 25th minute.

“It doesn’t matter which team we play,” captain Jean Ade said. “When we have the advantage, we need to take advantage because they start with nine players. We needed to attack them early. We just needed to score the goal.”

Playing even and enjoying more and more momentum, West Indies ripped open the game with three goals within a 17-minute span in the second half, sparking the team to victory.

Nursing a 1-0 lead, West Indies scored two minutes into the second half as James Chaperon tallied from close range.

Ade gave his team some more breathing room in the 62nd minute as he ran around a defender and goalkeeper before shooting from the right side.

Two minutes later Antoine Kepler scored from a tough angle for a 4-0 lead before Wilson Pun closed out the scoring in the 80th minute.

“The team has been together for a long time, so we know each other,” Ade said. “We know what to do and we play every day. When we’re not playing tournaments, we’re playing in Springfield, Queens. We’re always prepared. We’re ready to play soccer. We’re a good team.”

In the LISFL, West Indies leads Lindenhurst (7-3-0, 21) by two points for the regular-season crown.

The second- and third-place squads will battle in a playoff on May 22. The winner will meet West Indies United on June 5 for the title. 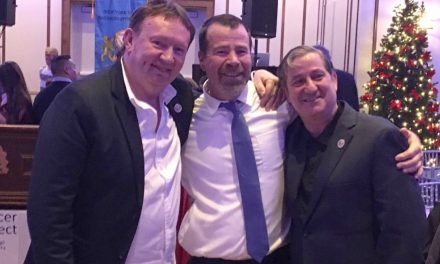 THE LIFE OF BRIAN: Hota honors one of its greatest players, Conlon