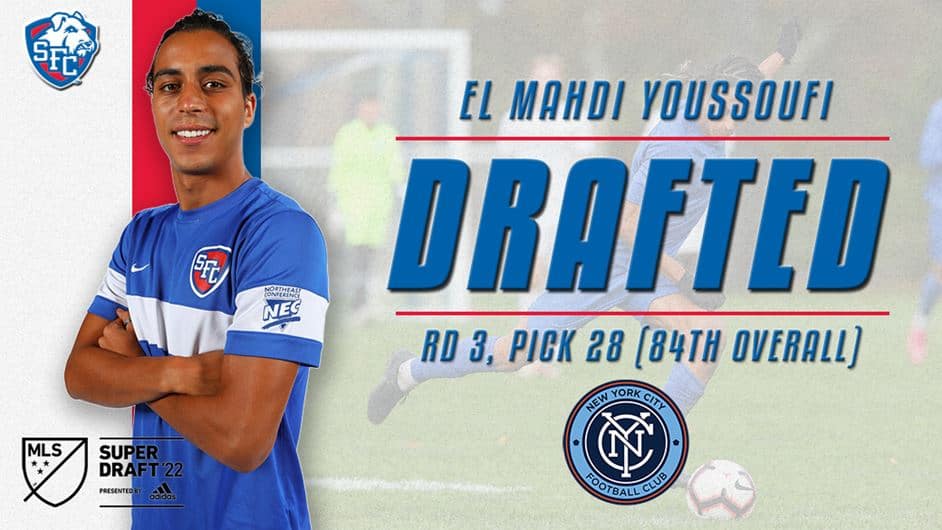 St. Francis Brooklyn College forward El Mahdi Youssoufi was selected by New York City FC in the third round of the MLS SuperDraft on Tuesday.

The selection caps off a banner year for Youssoufi, who was named 2021 Northeast Conference player of the year and placed on the United Soccer Coaches All-Northeast first team.

He finished the regular season with 25 points (12 goals, 1 assist), scoring in all but two games he played. He recorded 20 goals over three seasons. Youssoufi helped lead the Terriers to a second consecutive NEC Tournament championship appearance in October and was an integral part of the 2020-21 team that earned the program’s first NCAA Division I Tournament victory.

“We are so excited for Mahdi on being the first St. Francis Brooklyn player to be drafted right out of school,” St. Francis Brooklyn head coach Tom Giovatto said. “His growth over the past season has been incredibly impressive, and his dedication to his craft has earned him this opportunity with the top team in the MLS.”

Added athletic Irma Garcia: “I am beyond thrilled for our very own El Mahdi Youssoufi! He is a shining example what can happen when you combine hard work with a relentless pursuit of success. Congratulations to a true gentleman with exceptional speed on the field, who exemplifies the true meaning of Brooklyn Tough. This is truly a historical SFC moment.”

Youssoufi was the third Terrier to be affiliated with an MLS club in the league’s 27-year history. Mersim Beskovic was selected by the Tampa Bay Rowdies in the fifth round of the 2001 MLS SuperDraft after graduating in 2000, and played 11 minutes over three games for the NY/NJ MetroStars (now the Red Bulls) in 2001. Vincente Bezecourt signed a contract with United Soccer League’s New York Red Bulls II, later earning an MLS contract with the Red Bulls.

GETTING OFF ON THE RIGHT FOOT: St. Francis Brooklyn wins NEC opener