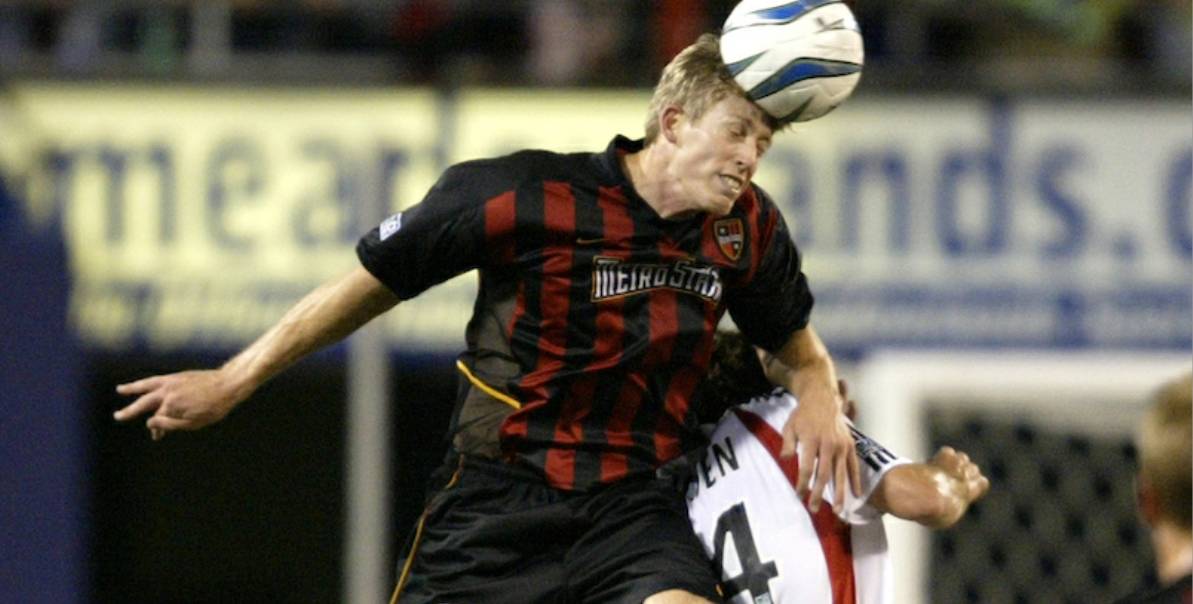 Despite being cut on April Fools Day in 1999, John Wolyniec came back to the club and produced some of the Red Bulls/MetroStars’ most memorable goals. (Andy Mead/YCJ Photo)

During the early days of the team, the Red Bulls/MetroStars have not always forged one of the best track records when it has come to MLS drafts, whether it be a general one, college or SuperDraft.

In 2010 they acquitted themselves quite well as midfielder Tony Tchani and defender Tim Ream, their top two selections in the draft, wound up as starters. However, they dealt Tchani to Toronto FC for Dwayne DeRosario before sending the Canadian international to D.C. United in a trade for Dax McCarty.

With the recent addition of Homegrown player signings in recent years, that has all changed as the team has brought up players from their Academy, Under-23 and Red Bull II teams who have contributed to the team.

Still, let’s take a look at 15 of the most forgettable draft choices:

The curse began with their very first pick in the 1996 allocation draft. The Metros selected Knowles, a perennial defender of the year in the indoor National Professional Soccer League, but a relative unknown quantity at the outdoor level. Due to indoor commitments and a series of injuries, Knowles managed to play the equivalent of a full season with the MetroStars and Miami Fusion over three years, performing in 32 matches over 2,310 minutes and never registering a point.

It continued with in the 1996 college and supplemental drafts. The Metros had two early selections in the first round of the college draft and traded them. In one of the most lopsided deals in MLS history, they got D.C. United’s picks in the supplemental draft and squandered them away. With the first two selections in the supplemental, they choose a pair of one-year disappointments — Nicola “Wrong Way” Caricola and Edmundo “Boooo!!” Rodriguez — and ignored then Long Island Rough Riders midfielder Chris Armas, who became an important cog with the Chicago Fire and the national yeam before he became Red Bulls head coach. Their first college selection was defender Scott Lamphear of Division I champs Wisconsin, who was a no-show. Their second choice was midfielder Miles Joseph, who was traded to Columbus during the 2000 season. Joseph has worked asn an assistant coach for NYCFC, Orlando City SC and the Portland Timbers.

A year later, they let yet another player under their noses slip away — defender Carlos Llamosa, an all-star for the N.Y. Centaurs and Fever (A-league), who was selected by United in the supplemental draft. He, too, is a vital part of the national team. Instead, the Metros chose defender Ezra Hendrickson, who was released in mid-season and became a regular with the L.A. Galaxy. The Metros took midfielder Brian Kelly in the first round of the college draft.

For fans who wondered why Bora Milutinovic lasted as long as he did as Metros coach, consider this fiasco. He brought in Division I scoring champion John Wolyniec for a two-week tryout, made the Fordham star the No. 1 college pick, then released him on April Fool’s Day. Wolyniec, a finalist for A-League rookie of the year, went on to score 15 goals for the Long Island Rough Riders. Later on, Wolyniec was called up and scored five minutes into his MLS debut while Ecuadorian international Eduardo Hurtado endured a 1,294-minute drought. Bora, however, refused to start the Staten Island native in the remaining games to test his mettle. Wolyniec eventually returned to the Metros in 2003 and tied for the team lead in goals (10) in 2004 before he was dealt to the Columbus Crew for Ante Razov in 2005. But Woly returned in August 2006 and was with the club until he retired after the 2010 season. He has produced some of the most memorable goals and moments in the club’s 20-year history. He currently coaches Red Bull II in the USL Championship.

Only months after taking over as coach, Octavio Zambrano continued the club’s sorry tradition when he took his own favorite son, defender Steve Shak from UCLA as the very first pick of the 2000 draft over such notables as Carlos Bocanegra and Nick Garcia (who was traded by the Kansas City Wizards to the expansion San Jose Earthquakes Tuesday). Rubbing salt into the Metros’ wounds was that they were offered a couple of first-round picks later in the round and Shak still would have been there.

The Metros selected defender Jake Dancy in the sixth round and apparently they didn’t know of his nefarious background in which he severely injured former D.C. United (and current Real Salt Lake) midfielder Brian Kamler with a punch during a pre-season exhibition match between the MLS club and the U.S. Under-20 National Team on Feb. 23, 1997. Dancy dropped Kamler with a tackle in the waning minutes of United’s 3-0 win. Kamler got up and walked toward Dancy, whose fists, witnesses said, were already clenched. Doctors compared Kamler’s injuries to those of a head-on car accident. He needed a 4 1/2 hour operation to reconstruct his left cheekbone and place five metal plates in his skull. Dancy pleaded no contest to a felony assault charge and was sentenced to five years’ probation and 350 hours of community service along with a $500 fine. And oh yes, he was let go by the Metros before the start of the season.

Jemmott, a midfielder from Trinidad & Tobago, was taken in the third round as the 26th overall choice in the draft. Two picks later, the Columbus Crew took Edson Buddle. End of case. Buddle eventually made it to New York as he was traded to the club prior to the 2006 season. He eventually was dealt away and enjoyed a productive career with the LA Galaxy.

Did anyone do their homework? This New York native and University of Connecticut midfielder was taken as the seventh overall pick in this draft. He never played a minute with the Metros because he already had decided to continue his education.

The Red Bulls chose Ohio State defender Eric Brunner as their second-round choice (16th overall) with great optimism. But by May, they had asked him to take a pay cut from a senior to developmental contract after signing defender Andrew Boyens. Brunner rejected it and left the team. That would have meant a significant pay cut from the $36,000 base salary and $44,750 guaranteed salary. Most developmental players earn $12,900 a season. Brunner eventually resurfaced with the Columbus Crew’s reserve team that season and became a starter on the team’s Supporters Shield championship side in 2009. He played in 2,072 minutes over 25 games. Brunner also played for the Portland Timbers and Houston Dynamo. He retired after the 2014 season.

What a waste of a pick. Ogunbiyi was taken in the second round of the draft (18th overall). On draft day, the Red Bulls talked Ogunbiyi up. Coach Juan Carlos Osorio called him “imposing figure in the back. If I am honest, there were three center backs in this combine. two were already taken. So, I made a decision of going with him because I think he has those physical attributes and tools that will allow us to work with. Hopefully we can work to develop him and make him more comfortable on the ball and be a better player.” Sporting director Jeff Agoos called Ogunbiyi “a monster. We’re looking forward to see how he adapts.” At first it was announced that the 6-4 defender from Santa Clara decided to finish his senior year and wouldn’t be available until May. Then he had trials with Oldham and Leeds United in England and is currently playing for Danish Superliga club Hobro IK before retiring in 2017.

The class of 2011 did not exactly break any records for playing. Actually, when you come to think of it, they might have. The four players the Red Bulls selected in the draft played a combined 10 games and 83 minutes in MLS action, which could very well have been the least in the history of the league. OK, let’s look at every player. Herzog (Penn State) played all of five games and 35 minutes after he was selected No. 13 on the first round. Hertzog, who has enjoyed a productive USL Championship career, plays for Reno 1868. Rooney, a midfielder and the younger brother of Wayne Rooney and a former player with Macclesfield Town (England), was chosen as the 25th selection and in the second round. He played 48 minutes over five matches. Lassiter (North Carolina State), who reminded coach Hans Backe of Ream, also was taken in the second round and No. 30. He did not play a minute as he eventually was loaned to the Carolina RailHawks (North American Soccer League). Cortes, from the University of Maryland, did not make the team. 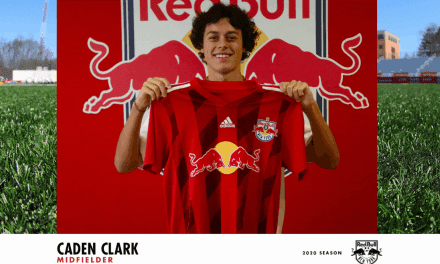 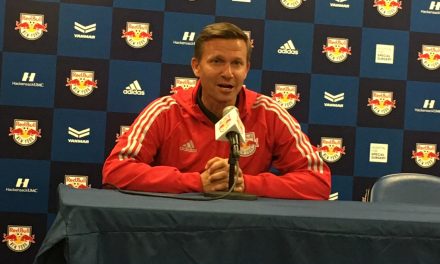 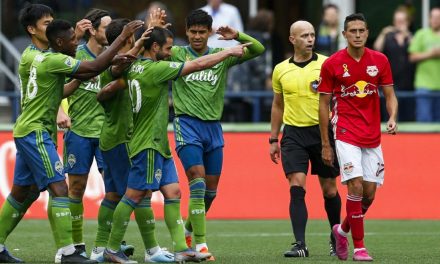 THIRD TIME IS NOT A CHARM: Late own goal dooms Red Bulls, losers of three straight 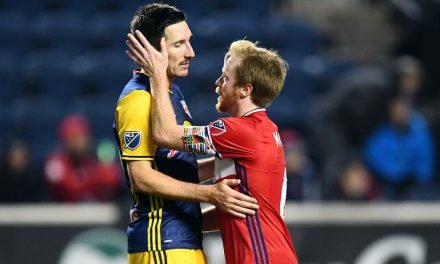 DAX’S VIEW: ‘We got outplayed all over the field’