New York City FC is not only MLS Cup champions, but the team is a nomad in its own land.

The Cityzens will play 10 games at Yankee Stadium, six at Citi Field and one at Red Bull Arena.

The MLS Cup champions will begin their title defense on the road against LA Galaxy on Sunday, Feb. 27 and Vancouver Whitecaps on Saturday, March 5.

The following week, NYCFC will host its home opener against CF Montréal at Yankee Stadium on Saturday, March 12.

The 2022 schedule features 26 matches (out of 34 games) against Eastern Conference opposition and eight contests against teams from the Western Conference.

The Oct. 1 match at Citi Field on could be relocated depending on Mets post-season contention. After the MLS Cup victory, NYCFC will take part in the Campeones Cup with the first home match taking place at Yankee Stadium on Sept. 14. Due to this additional game, one regular season match will now be moved to Red Bull Arena.

NYCFC will play crosstown rivals the Red Bulls in the Hudson River Derby, once at Red Bull Arena and once at Yankee Stadium. The rivalry renews on Sunday, July 17 at RBA in a nationally televised match on ESPN. The season series concludes on Saturday, Oct. 1 at Yankee Stadium. 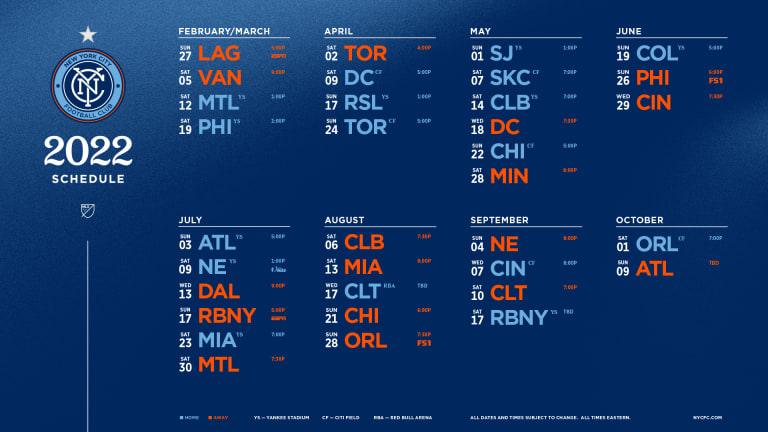 “Last season was the most successful and significant in our club’s history,” NYCFC CEO Brad Sims said in a statement. “From starting the year welcoming fans back to matches to finishing the season hoisting our first ever MLS Cup – 2021 was a year we will never forget. However, the work doesn’t stop there, and we are already looking to next season. Following the amazing momentum we’ve built, we’re working every day to make the upcoming 2022 season our most exciting yet for our incredible fans.

“We are very pleased that our secondary venue for the 2022 season will be Citi Field and know that it is the best and preferred alternative for our fans and players. Citi Field is a world-class facility and we’ve experienced an incredible in stadium atmosphere from our fans when we have played there in the past.

“Playing this next season as the defending champions is something I know our organization and fans will take incredible pride in. Despite our season ending just this past weekend in spectacular fashion, we cannot wait to see our fans back again next year.”

The full NYCFC TV schedule – including games broadcast on the YES Network – will be announced in the coming weeks.

A WILD AND CRAZY DRAW: NYCFC strikes thrice, but settles for a home tie