After guiding the Red Storm to a 13-7-3 record that was capped by an appearance in the NCAA Division I Round of 16 for the first time in program history, Kajan was named to the first team, while Garziano was selected a spot on the second team.

Named Big East offensive player of the year for the second time in her career this season, Kajan is coming off one of the finest campaigns in St. John’s women’s soccer history. The 5-7 forward tallied 16 goals in 23 games to lead the league and rank inside the top-five among Division I opponents. The Budapest, Hungary native netted a conference-high seven goals during Big East action and registered at least one point in seven of 10 conference games to finish atop the league ledger with 17 points.

Kajan put up five multi-goal games, including two hat-tricks – against Saint Joseph’s on Aug. 21 and Creighton on Oct. 24. She is the only player in program history to record four career hat-tricks for the Johnnies. Kajan climbed the program’s all-time list for a number career records this season. With 45 goals and 101 points, Kajan ranks second overall in both categories.

After leading the squad in scoring over the spring 2021 season, Garziano served as the Red Storm’s leading facilitator over the fall campaign. The Melville, N.Y. native recorded a team-high 10 assists in the fall, for the second most in program history. The two-time all-conference selection registered five of her 10 assists during conference action to sit inside the top-three in the conference. 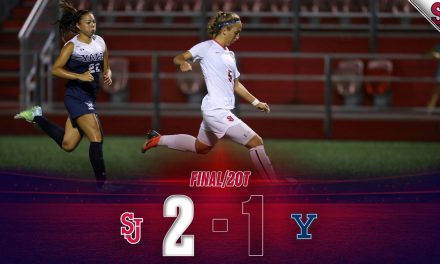