Both sides claimed their respective conference titles in games that went to extratime before sellout crowds on Saturday night.

Next Sunday’s game will air live on ESPN, ESPN Deportes and SiriusXM FC.

The Rowdies retained their Eastern Conference title in remarkable fashion with a 3-2 victory after extra time against Louisville City FC before a crowd of 7,210 at Al Lang Stadium. The Rowdies rallied from a two-goal deficit with less than 10 minutes remaining as second-half substitute and former Cosmos Lucky Mkosana scored twice – including the equalizer in the sixth minute of second-half stoppage time – before Steevan Dos Santos record the game winner in the 102nd minute for his second goal of the postseason.

Orange County advanced via penalty kicks for a second consecutive week, this time against San Antonio FC before a crowd of 5,386 at Championship Soccer Stadium. Sean Okoli converted to open the fifth round to seal the win after SAFC’s Justin Dhillon had sent his effort off target to close the fourth round. In regulation, OCSC’s Ronaldo Damus had given the hosts the lead before San Antonio’s Marcus Epps equalized in the second half. Orange County maintained a perfect record in penalty shootouts in the USL Championship Playoffs at 3-0-0 in club history. 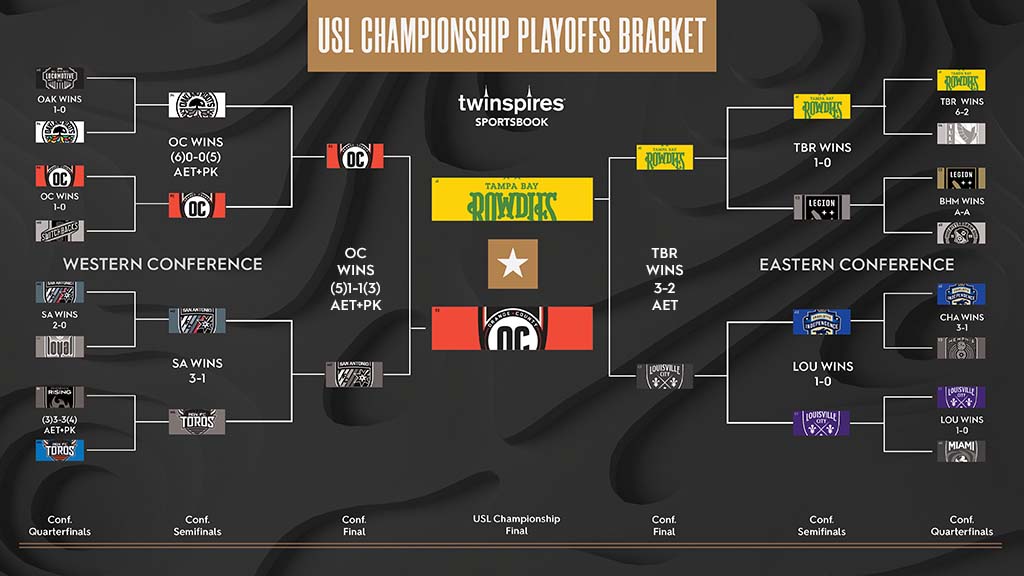 A two-time Eastern Conference title-winner, the Rowdies will try to claim their first USL Championship title and the club’s first league title since 2012. The Rowdies earned home field advantage for the Final by virtue of posting a league-best record of 23-7-2, with forward Sebastián Guenzatti (21 goals, 6 assists), another former Cosmos, leading the attack and two-time USL Championship Defender of the Year Forrest Lasso anchoring the club’s league-record shutout streak of 891 minutes.

Orange County will compete in the Championship Final for the first time in its 11-season history after earning the Pacific Division’s second seed, going 15-10-7 in the regular season. Damus, a regular for Haiti’s national team, scored 16 goals this season, including two in these playoffs. Former U.S. men’s national team defender and OCSC captain Michael Orozco has been a stalwart for his hometown club.

The action will be brought to a nationwide audience on ESPN and SiriusXM FC by play-by-play host Mike Watts, analyst Devon Kerr, and the Chicago Red Stars’ Sarah Gorden as sideline analyst and reporter. ESPN Deportes’ broadcast will be led by play-by-play host Jesús Eduardo Acosta and analyst José Armando Rodríguez.

THE HANDS-ON APPROACH: Diaz returns to Cosmos as goalkeeper coach