HEMPSTEAD, N.Y. – Despite a dominant second-half performance, the Hofstra University women saw their nine-match winning streak come to an end with a 1-0 setback to Northeastern University at the Hofstra Soccer Stadium Thursday evening.

The loss also snapped a 21-game regular season unbeaten streak in the Colonial Athletic Association play, dating back to Oct. 7, 2018. The team’s last CAA defeat for Hofstra came against Northeastern by a 1-0 margin here.

The Huskies scored the lone goal as Rose Kaefer knocked home a bouncing ball in the box during the 26th minute. The Pride threatened late in the half but could not push a goal across before the intermission.

Hofstra picked up where it left off out of the locker room, threatening early and often. During the 52nd minute, Louise Hayden whipped a ball into the box to an open Lucy Porter, but her left-footed attempt was stopped along the near post by Angeline Friel before rolling along the entire goal line. In the 76th minute, Lucy Shepherd sent in a left-footed cross that found Georgia Brown, but her header was sent aside by a diving stop from Friel to keep the Pride scoreless.

Hofstra’s final opportunity of the evening came during the 87th minute when Porter lobbed a shot from the top of the box that Friel tipped off the crossbar to help preserve the one-goal victory. 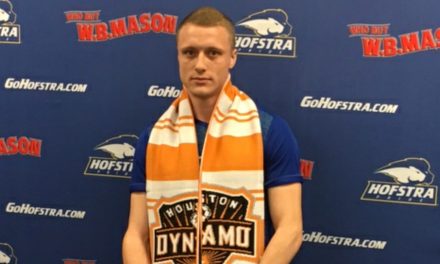 GOODBYE AND THANK YOU: Midfielder Joseph Holland has a few words for Hofstra