CHICAGO – The National Women’s Soccer League’s board of governors Sunday announced the formation of an executive committee to manage oversight of the league’s front office operations, following the resignation of its commissioner.

A global search for a permanent commissioner is underway.

“On behalf of the entire league, we are heartbroken for what far too many players have had to endure in order to simply play the game they love, and we are so incredibly sorry,” the three executive committee members said in a statement. “We understand that we must undertake a significant systemic and cultural transformation to address the issues required to become the type of league that NWSL players and their fans deserve and regain the trust of both. We’re committed to doing just that and recognize that this won’t happen overnight, but only through vigilance over time.”

The league also announced that it also has launched several critical investigative and reform initiatives to protect players and staff, and the environment in which athletes live, train, and compete to give athletes the agency and ability to safely report misconduct of any form.

The NWSL has retained Covington & Burling to oversee these investigations and make recommendations for reforms. Amanda Kramer, former Assistant United States Attorney in the U.S. Attorney’s Office for the Southern District of New York, will lead the firm’s team and will report directly to the NWSL board’s newly formed executive committee.

* An independent review of practices and policies at the league and club levels — including workplace policies for each club in the league, league-mandated anti-discrimination and anti-harassment policy, and processes for identifying, investigating, and enforcing violations of those policies — to identify and reform deficiencies. The league will work with the players association to ensure that the results of these team and league reviews will serve as a road map to ensure safe environments for players and staff.

* Comprehensive policies and procedures created for the league and all member clubs to ensure moving forward that there is a systematic, transparent, and effective execution of any harassment or workplace conduct issues.

* A reopening of the 2015 investigation regarding former NWSL coach Paul Riley, including a review of the circumstances surrounding his departure from the Portland Thorns FC, and his subsequent hiring by Western New York Flash and the North Carolina Courage.

* A review of the available investigative reports related to all historical complaints of discrimination, harassment, or abuse (physical, emotional, or sexual) in the NWSL, and where necessary, a reopening of the respective investigation, or the initiation of a new adjudication process.

* The continuation of ongoing investigations initiated under the NWSL’s current anti-harassment policy, and the recommendation of sanctions where appropriate.

The NWSL’s current reporting avenues outlined in the league’s anti-harassment policy and detailed, the league has partnered with RealResponse, the leading secure and anonymous reporting platform for sports teams and organizations. Players, former players, staff, former staff, and anyone with direct knowledge of, or witness to, misconduct in any form within the NWSL, will have the ability to anonymously report all issues in regard to their health and safety. The contact information will be made available to current players and staff.

The league is taking these steps in recognition of the need to root out wrong doing, earn trust through accountability, and build an environment where success on and off the pitch is the central theme of any discussion of the NWSL, its clubs and the incredible players that take the field each week.

THE REST OF THE SCHEDULE: Of the 2020 NWSL Fall Series 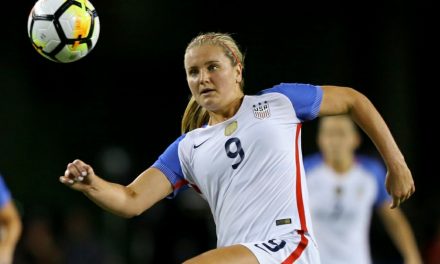 IT WAS CRYSTAL CLEAR: NWSL names Dunn player of the month for June

THE FULL LIST: All 48 selections in the NWSL draft