The Lancers defeated the Washington Darts in the aggregate goals series, 4-3. (Photo courtesy of the Rochester Lancers)

The following is an excerpt from Michael Lewis’ upcoming book: Alive and Kicking: The Incredible but True Story of the Rochester Lancers, on what transpired in that game.

The Rochester Lancers’ 3-0 win over the Washington Darts in the first leg of the North American Soccer League championship series in Rochester came at great cost as Carlos Metidieri was forced out of the first leg with a slight dislocation of his right knee early in the second half when he was tackled by Willie Evans. Metidieri, who was seen hobbling around on crutches, was listed as questionable for the second leg in Washington, D.C. on Sept. 13.

“We’re watching the knee closely,” Lancers head coach Sal DeRosa told the Rochester Democrat and Chronicle. “I’d just like to get a half out of him. That should be enough.”

Washington’s form had suffered in the previous weeks as did goalkeeper Lincoln Phillips as it was discovered he had been bothered by a jammed finger and a groin injury. The Baltimore Sun reported there had been rumblings of team dissension and that Sutherland was becoming disenchanted with Phillips.

“To be frank about it, Phillips just has not been himself lately,” Darts general manager Norm Sutherland told the Sun. “When the goalie looks shaky, it reflects on the whole team. They all look shaky. Our offense has been sluggish, too. We had plenty of chances last week, but we didn’t get any good shots. I don’t think the Rochester goalie made one good save.

“We are a shadow of the team we were once. Things have gone all to hell and anybody coming to see us now that hasn’t seen us in six weeks would think we must have transferred the whole team.”

As the Lancers prepared for the final leg of the aggregate goals series, they began to reap rewards for their performances. Defenders Charlie Mitchell and Peter Short were named varsity coaches at Cardinal Mooney and Marshall high schools, respectively. DeRosa was chosen to coach an NASL all-star team that would play against Santos of Brazil and Pele at Soldier Field in Chicago on Tuesday, Sept. 15 Mitchell, Luis Marotte, Raul Herrera, Gladstone Ofori and Metidieri were selected to the team.

The Lancers also learned that the playoff winner would represent the United States in a competition called the National Cup in the Concacaf region against the likes of Honduras, El Salvador, Mexico, Haiti, Bermuda and Jamaica. “We will know about the pairings and when the tournament starts later in the fall,” Lancers general manager Charlie Schiano said. “Right now, however, we are concerned about winning the NASL championship.” 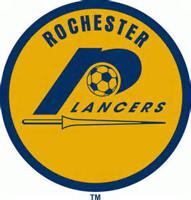 The final game was a big deal in Rochester. During those days, a televised soccer game in the U.S. – a live one at that – was as rare as a tsunami in the desert. But the 25 stations of the National Education Television network (NET) broadcast the game, which was slated to kick off at 3 p.m. on Sunday, Sept. 13 at Catholic University.

“We’ll never let them score three goals without scoring ourselves,” DeRosa said. “Sure, they may score, but we’re going to score, too.

“Sure, the odds are with us, but we are far away from making any statements that the championship is ours. We’re going out there as though the game was from scratch. The ball is round, and in soccer, anything can happen. A lot of people think that we’re going to concentrate on defense … but that’s not true. We’ll be out there just as last week. Our aim is to win the game and not protect the lead.”

“It’s a tall order, but it can be done,” Phillips said.

There were rumors swirling that Phillips would be replaced as coach or as goalkeeper for the game. “All I can say to you at this time is that we have made some significant changes for the game,” Sutherland said.

How big was the encounter? The Lancers arrived a day before the game – at 10 p.m. – as opposed to their regular-season practice of flying in the day of it. They stayed at the Commodore Hotel.

With a three-goal lead, the Lancers were in the drivers’ seat. Their quest was helped when Herrera, off a Metidieri pass, beat Phillips from point-blank range for a supposedly insurmountable four-goal advantage in the 40th minute. But the visitors woke up a slumbering lion before 5,543 spectators.

A minute before halftime Leroy DeLeon drove home a penalty past goalkeeper Claude Campos after defender Winston Earle was called for a foul in the box. The Lancers were incensed, particularly Campos and Herrera. Earle had to restrain Herrera, who went nose-to-nose with referee Mike Ashkenazi (who also worked second leg of the 1967 National Professional Soccer League championship series).

“There’s no way that could be a penalty kick,” DeRosa screamed to reporters afterwards. “It happened in the middle of the field and they didn’t even have the ball. Sure, it ruined our tempo.”

Added Short: “It was a late call. That’s what we didn’t like.”

Moreover, the Darts gained the momentum and continued to press. Four minutes into the second half, Washington made Rochester sweat even more, cutting the lead to 4-2 in the series of a Joseph “Nana” Gyau goal from a Robert Grell assist. The game got even tighter in the 70th minute as Gerry Browne, off a Warren Archibald set-up, tallied to close the gap to 4-3.

Metidieri, who was awarded a trophy at halftime for being co-scoring champion (a strange time to be honored in a final) was taken out for Jesus Miranda in the 75th minute.

“We wanted to get as much of him as we could,” DeRosa said. The Lancers were able to hold off the Darts as Campos stopped seven shots.

Ashkenazi’s final whistle sounded at around 5 p.m. ET and the Lancers won their first championship. Champagne again flowed and was spritzed around the locker room.

“It was the first time our players have played for a championship and they were nervous,” DeRosa said between sips of a cup of the bubbly stuff that probably tasted sweeter considering what he and the Lancers had accomplished. DeRosa inherited a uninspired 4-6-3 team that could not win at home on a consistent basis. He added five key newcomers, his coaching touch and inspiration and went on a run that was good enough — 5-2-3 — to reach the playoffs.

“Alex Perolli was a strict disciplinarian, demanding that we play our position and nothing else,” said Mitchell, the team captain. “He would tell me, for instance, to mark my forward and not worry about going upfield. DeRosa changed that by letting his backs move up with the play and it put new life into the club. We scored more and everybody was happier.”

As it turned out, not all the champagne tasted sweet. Midfielder Frank Odoi took a swig. “It doesn’t taste like champagne,” said Odoi, who asked trainer Joe Sirianni where it came from. Trainer Joe Sirianni told him to ask team president Pat Dinolfo, who said he kept the champagne in his car trunk for a year. It was supposed to be used after a Lancers’ victory over the Scorpions Scorpions in 1969, but Syracuse had other plans by winning the game and the Northern Division title in the American Soccer League.

Returning Rochester that Sunday at around 10 p.m. as about 250 fans greeted the team at the airport as Mitchell held the championship trophy aloft in triumph. Mayor Stephen May read a proclamation and announced that Monday would be “Salute the Lancers” day.

The party continued at the Downtowner, where the celebration continued into the early morning hours.

Mitchell stood on a chair and proclaimed, “This trophy belongs to Charlie Schiano and Pat Dinolfo as much as it belongs to the players. I am proud to present it to them.”

Not every Lancer could party into the wee hours as Mitchell, Marotte, Herrera and Ofori had those all-star commitments against Santos (Brazil) and the incomparable Pele at Soldier Field on Tuesday. They had to be in Chicago on Monday. Metidieri, who was sporting that knee injury, could not play.

Santos, managed to squeak past the NASL squad, 4-3, on a disputed goal by Douglas with less than 30 seconds remaining in the match. The all-stars claimed the ball was out of bounds. Pele did not find the back of the net as Ofori and Marotte reportedly were outstanding.

The D&C even congratulated conquering heroes in an editorial that Monday:

“Not every Rochesterian is aware that the Lancers brought to this little-starved city its first national professional team championship in a major sport in 20 years. The last time we feasted on national championship fare was when the Royals bested New York for the National Basketball Association crown.

“The Lancers’ feat is all the more remarkable because this is only their third year of play and their first in the majors. For an immensely popular sport in Europe and South America … professional soccer was late in reaching Rochester. But the sport which is tops in 136 countries has finally sunk its roots solidly in Rochester. In their last three local contests, the Lancers drew 28,000 spectators. Nothing succeeds like success.

“We salute coach Sal DeRosa, his players and the team’s backers for bestowing on Rochester this new distinction in the world of sports.”

Dinolfo and Schiano were looking ahead to 1971 and beyond. They were ready to ask the league to change the playoff system from aggregate goals series to a best-of-three and that each match would be played until there was a winner in sudden-death. The NASL adopted their proposal, which would come back and bite the Lancers in their rear end.

But for now, the Lancers had more important things on their collective minds, such as celebrating the biggest moment in their history.

ALMOST THERE: MASL approves indoor Lancers, who hope to play at Gene Polisseni Center at RIT