LIVING UP TO HER BILLING: Kajan’s brace boosts St. John’s women over NJIT

Zsani Kajan picked up where she left off. (St. John’s Photo)

QUEENS, N.Y. – Preseason Big East offensive player of the year Zsani Kajan kicked off the season with a bang, scoring twice in the St. John’s University women’s 3-0 victory over NJIT in the season opener for both teams at Belson Stadium Thursday night.

Kajan increased her career total to 30 goals, moving into fourth on the Johnnies’ all-time scoring list.

Jessica Garziano, who joined Kajan on the preseason conference team, accounted for the Red Storm’s third goal, scoring in the 26th minute to give St. John’s an early edge.

Garziano, who led the Johnnies in scoring a season ago, scored her first goal of the campaign. The sequence began as Shannon Aviza played a long pass into the box for Garziano. The Melville, N.Y., native corraled the ball before finishing to the far side.

Less than 10 minutes later, Kajan added to the lead. The play began when Annie Wysong sent a ball from the right side of the box to Kajan. The Budapest, Hungary native tapped it in towards the left corner of the cage to give St. John’s a two-goal lead at the intermission.

In the 79th minute, Kajan put the game out of reach, finding the back of the net for the second time. Garziano picked up an assist as the junior midfielder sent a pass to Kajan, whose shot bounced off the crossbar. Kajan sent the ball into the left side of the net.

St. John’s returns to action on Sunday, when the Johnnies travel to Philadelphia for a 1 p.m. contest with Saint Joseph’s. 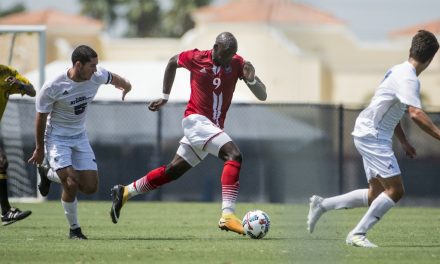 TYING ONE ON: Guirassy’s brace lifts NJIT as he ties school goal record