An average audience of 2,018,000 viewers watched the four quarterfinal matches on ABC and ESPN on Friday and Saturday (July 2-3), a 16 percent increase compared to the 1,737,000 average viewers who watched the quarterfinals in 2016. 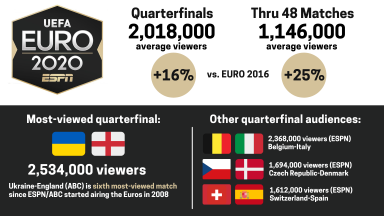 Audiences for Quarterfinal Matches on ABC/ESPN:

Coverage of UEFA EURO 2020 will culminate with Italy vs. England in the final Sunday at 2:30 p.m. ET, on ESPN and ESPN+ and streamed live on the ESPN App. Ian Darke and Taylor Twellman will call the match from Wembley Stadium in London.

Pregame coverage will begin at 2 p.m. on ESPN2 with Rece Davis hosting from Bristol, Conn., and Kelly Cates live from a set outside Wembley. ESPN’s collection of analysts will be led by former national team stars Alessandro Del Piero (Italy) and Steve McManaman (England). Global sports correspondent Sam Borden will also report from the stadium.

NEW VENUE: CONCACAF Women’s U-17 Championship to be completed at IMG in June