“Congratulations to our guys Nico, Harald, and Callum on earning United Soccer Coaches All-Northeast Region honors,” Giovatto said. “All three student-athletes played significant roles on our team this season and were all instrumental to our success as a whole. We are very proud of each of them for earning this prestigious recognition.

“We are also extremely grateful to be named the United Soccer Coaches regional staff of the year. This is a great honor and I am proud to share this award with Coach Andy and Coach Jason, who both do a tremendous job day-in and day-out.”

The Terriers captured their ninth Northeast Conference championship, the most in conference history as well as the program’s 10th NCAA Tournament appearance. St. Francis advanced to the Second Round of the 2020-21 NCAA Tournament.

Molina was named to the All-Northeast Region first team. The senior became the third student-athlete in program history and the first since Duke Shamo in 1998 to win the NEC player of the year award. He also was selected to the All-NEC first team. He led the team in points with nine, was first in goals with three and was second in assists with three. Molina was tied for second in points, was tied for fifth in goals, and tied for second in assists.

Sollund, a defender, had a standout first season s he became the third Terrier in program history to be named the NEC defensive player of the year. He also was an All-NEC first team selection. The defender anchored a backline that surrendered seven goals in 10 games. The junior helped the Terriers to three clean sheets as he played in nine games. Sollund logged 744 minutes and scored his first goal as a Terrier in a win over Mount St. Mary’s March 15.

James was selected to the second team. The goalkeeper became the first student-athlete in NEC history to take home the goalkeeper of the year award and was named to the All-NEC first team. He also ed the Terriers to the 2020-21 NEC Championship title in the penalty kick shootout against LIU. James scored a goal in the shootout and made three successive saves. James registered a 6-1-2 mark and collected three clean sheets. He made 26 saves, recorded a 78 percent save percentage, surrendered seven goals, and finished a 0.72 goals-against average. James ranked second in the conference in goals against average, third in save percentage, tied for second in saves, and seventh in saves per game (3.0).

GETTING OFF ON THE RIGHT FOOT: St. Francis Brooklyn wins NEC opener 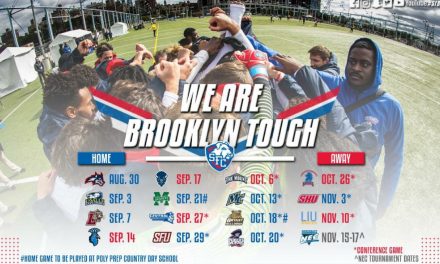 THE SCHEDULE IS SET: For St. Francis Brooklyn men this fall