Gee, what a surprise! The U.S. women’s national team has been drawn into the same group as Sweden for the Olympic women’s soccer tournament.

The reigning Women’s World Cup champions and top-ranked USWNT certainly face a difficult group with the likes of ninth-ranked Australia and the great Sam Kerr, No. 2 New Zealand and the fifth-ranked Swedes, who are the equivalent of their eternal rivals, at least for the 21st century.

The draw was held at FIFA headquarters in Zurich, Switzerland. Former USWNT player Lindsay Tarpley participated in the draw.

“After waiting an extra year for this Olympics, the draw represents a real milestone in our journey and helps us focus in even more on our preparation and what we need to do to achieve our goals,” USWNT head coach Vlatko Andonovski said on the www.ussoccer.com. “We have great respect for all three of our group opponents and we know this tournament will push us to our limits both mentally and physically, as well as challenge us every game technically and tactically, so we will do everything we can in the next three months to prepare for success.”

Sweden eliminated the four-time gold medalists 2016 quarterfinals at the Rio Summer Games, winning a shootout and denying their foes an opportunity to win a medal for the sixth consecutive time. It was the one of the lowest moments of the star-studded history of the USWNT as the squad failed to reach the semifinals of a Women’s World Cup or an Olympics for the first time.

USWNT supporters certainly will remember the aftermath of the loss to the Swedes as goalkeeper Hope Solo called the winners cowards for playing such a defensive style during the match. That began a fall from grace of the legendary keeper, who eventually was thrown off the team. 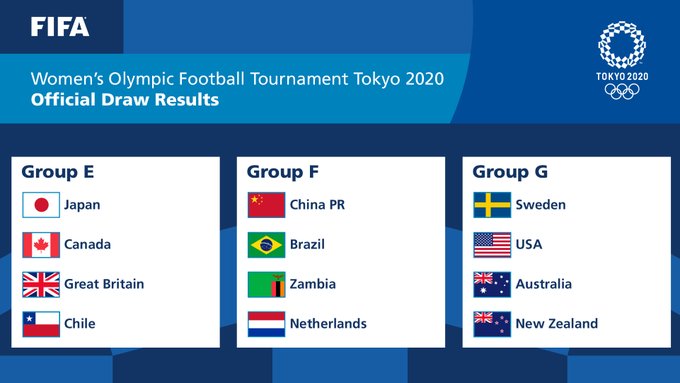 The USA bounced back by winning the 2019 Women’s World Cup in France.

Beyond the Swedes, the USA has its work cut out for itself because Australia boasts arguably the best women’s player in the world in Sam Kerr, and New Zealand.

The USWNT will kick off the competition against the Swedes at Tokyo Stadium in Tokyo in the first game of a doubleheader July 21. The team will face New Zealand at Saitama Stadium in Saitama July 24 before finishing group play against Australia in Kashima Stadium in Kashima July 27.

The top two teams in each group will book spots in the quarterfinals, along with two of the best third-place sides.

Here are the full draw results:

WAIT TIL NEXT YEAR: Solo puts off Hall induction as she will enter in-patient alcohol treatment program