The Terriers secured the NEC’s automatic bid to the NCAA Division I tournament as they will make their 10th appearance.

St. Francis (5-1-2, 5-1-1) captured its fifth NEC Championship in the last eight years and has won three of the last five conference championships. The Terriers have secured their last three Championships on their home pitch, Brooklyn Bridge Park – Pier 5, and have not allowed a goal in any of those games. LIU fell to 3-1-4, 3-1-3.

“It’s magical, especially with the amount that we’ve been through,” St. Francis sophomore goalkeeper Callum James, the MVP of the final. “It’s been over a year since we’ve had a season, and to come back this strong, everyone’s bonded, and everyone’s done the work. We all deserve it.”

With the tie-breaker at 5-5, LIU had the chance to win the game when Demetri Skoumbakis stepped up for his attempt. James made his first of three consecutive stops as he turned away his goalkeeper counterpart.

The shootout remained tied at 5-5 after a miss by the Terriers. Vasilios Brisnovalis took an attempt in the eighth round of the shootout, but was denied by James who made a tremendous save as he dove to the right to keep LIU off the board. Senior defender Vicente Gallardo then drove the ball into the back of the net to put the Terriers up, 6-5, in the ninth round.

The game was left in the hands of James. LIU’s Andre Puente was the next shooter for the Sharks and needed to convert to extend the shootout Puente sent the ball to the top right, but James made a lunging save for the win.

“The guys were incredible this year, and again, it comes down to craziness. Penalties. We were able to pull it out,” St. Francis head coach Tom Giovatto said.

“It’s a lot different. Every single day you worry about your team being shut down, not really thinking far ahead, and thinking about the next day only. What we asked of these kids is incredible. At the end of the day, they’re still college kids. They did every single thing we asked for the whole year. They deserve everything.”

END OF THE LINE: St. Francis men ousted from NCAA 2nd round via PKs 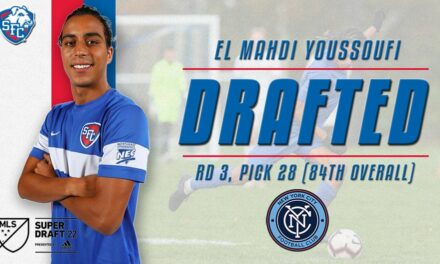