OFFSIDE REMARKS: An amazing journey to the Emerald Isle of the Caribbean

During a clear night at Gingerbread Hill, I walked out of my room, laid down on the grass and stared at the heavens.

Wow! The sky never was like this. There were stars, clusters of stars out there. I had never seen anything like this.

Ah, so this is what the universe really looks like, I said to myself.

I was on that tiny rock of an island – aka the Emerald Isle of the Caribbean – to cover a World Cup qualifying match that involved what many people considered at the time to be the worst national team in the world. On the day of the 2002 World Cup final, the Montserrat national team traveled to Bhutan to determine that honor. They were the two lowest ranked FIFA teams.

Montserrat’s travails were chronicled in the movie, The Other Final.

I fell in love with the place even if I was there for a scant few days.

It made international headlines in 1997 when the Soufriere Hills volcano wreaked havoc on and devastated the island, destroying its capital, Plymouth and forcing about two-third of its 11,000 citizens to leave. Many people ventured to England.

Today’s version of the Emerald Boys. (Photo courtesy of BOL)

I have always been interested in writing about the underdogs and the minnows of soccer, so Montserrat was at the top of my list (when I first visited in England in 1982, I wrote about two teams in the old English third and fourth divisions, Leyton Orient and Wimbledon, respectively, for Soccer America. They have been two of my most favorite stories).

Getting there wasn’t easy. There are no direct routes from the United States to many Caribbean islands. I took a flight to Antigua & Barbuda, stayed a night at a rather rundown hotel and hoped on a boat to Montserrat. The airport had been destroyed during the volcano disaster and there was the option of taking a helicopter to the neighboring island. I decided on a boat ride.

It was more fun, seeing flying fish and this giant rock seemingly come out of nowhere over the horizon.

For reasons I don’t remember, I could not book a room at the Tropical Mansion Suites, which was more like a motel than anything else. It probably was booked up. Instead, I decided to be adventurous and stay a Gingerbread Hill. David Lea, the proprietor of the establishment, met me at the dock and gave me a ride to my home away from home the next few days.

David Lea and his family made meals for me at an additional price, and I ate with them as well. A wonderful family and group of people.

A great move for so many reasons.

Lea, whose family lived several miles away from Plymouth, had chronicled the volcano’s eruption and history with CD’s, which I brought back to the states. He gave me a verbal education on what transpired there as well. 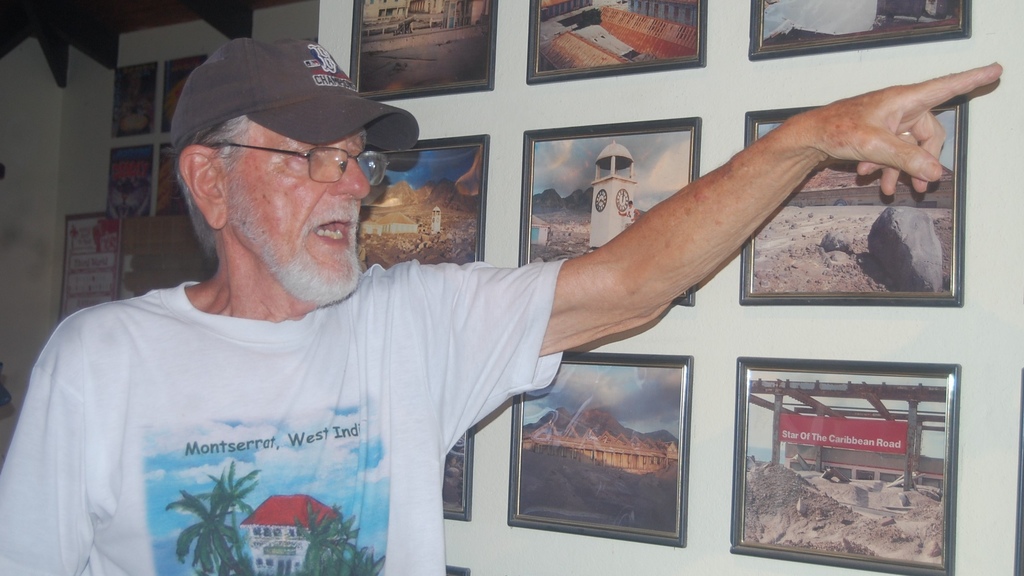 David Lea knows what he is talking about when it comes to the Montserrat volcano.

My room was not connected to the main house and my stay in that room was uneventful except for killing a giant moth that bothered me at night, one that could have been turned into Mothra if not contained. You don’t have to thank me, world.

Oh yeah and before I forget, I lost count of how many mornings I woke up to rainbows on the island. There was one day in which there were two at one time.

I took many of my trips around the island was with a German journalist whose goal was to visit every football association around the world.

My humble goal was just to traverse the island.

Take a tour of Gingerbread Hill! (Video courtesy of YouTube)

I decided to rent a car instead of relying on cabs, giving me freedom to go anywhere I wanted. And, in the long run, it probably was cheaper.

I needed a license to drive on Montserrat, although I picked up my rental – Toyota Corolla – before I secured that license. In fact, the captain of national team, who was on the police and who I was going to interview later, walked into the police office while I was obtaining the proper paperwork. Little did he know that a scofflaw was in his midst, an unlicensed driver, at least for a half hour.

Driving was among the major challenges. They drive on the other side of the road in Montserrat, which meant I fought years and years of instincts of driving the American way. It was a challenge and a half. Remember, English cars have the drivers in the right seat.

Given that the island was small (10 by six or seven miles), there were no great highways. Most of the roads were two lanes with animals sometimes deciding that they owned the road. That includes cows, goats and chickens.

While I rather would have stared at the skies, day or night, this was no vacation, and my days were packed. My German friend and I even ventured into the exclusion zone (there were signs warning us to keep out, that we were breaking the law) in the Plymouth region. Heck, we were journalists and were serious.

The Saturday night prior to the game, I had drinks with some English journalists who were filming a piece about the Montserrat team for European TV (if memory serves me correctly) at another establishment and another one of my great challenges awaited – driving home with some liquor in me, on the “wrong side” of the road, going down, long steep roads on the mountainous terrain. At night, crabs come out and walk across the road. I am proud to say that I returned home unscathed, and no crabs were run over (at least by me).

During one of my times out, I visited the island dump for some reason. I don’t remember why but I do remember I saw the biggest chicken ever – a red one – pecking around at the garbage (it would have made a great visual on the old Drew Carey Show, I thought at the time).

While Montserrat trailed Bermuda 13-0 after the first leg of its Concacaf opening round qualifying series, the game was considered a red-letter day for the island as Blake Estate hosted its first game ever.

A day or two prior, workers put the finishing touches on straightening the dirt brown road leading to the venue. Shrubs were planted to spruce up the place.

The ground itself was spartan, with very few amenities.

The stands filled up quickly, so people either brought their own chairs or stood along the sideline. A rope circling the entire field separated the players from several hundred fans.

There were no pitch invasions.

There also was no press box so as any former Boy Scout or current sportswriter will do, you innovate.

The Montserrat bench, which was essentially a bunch of white plastic chairs, had a few extra and I asked if I could borrow one for the next 90 minutes or so. They said no problem. I walked 10 feet away from the players and watched the match from there.

“Come on guys! We have a second chance, mon!” one of the players said. “What are we going to do? Win!”

“This is a steppingstone for Montserrat football teams. Whether we win or not, this is going to mean a lot to us.”

Wish I could say the Emerald Boys pulled off a historic comeback for the ages, but they went down to the Bermudans, 7-0 that day. The players took it in stride, as well as they could from a seven-goal defeat.

A couple of days later left for Antigua, from where I would take a plane that left at 4 in the morning that would fly me to Suriname for the second part of my foray into the Caribbean.

But that’s another story for another time.

I would love to return to the Emerald Isle of the Caribbean.

I took photos of my time there, but at the present time they are difficult to transfer from a rather primitive digital camera of that era (remember, this was before cellphone cameras) to today’s technology. Hopefully, someday I will be able to share them with you.

Now, as a sports journalist I am supposed to be neutral.

I root for my story, not a particular team.

But today, I will make an exception. A piece of my heart is in Curacao, where Montserrat begins its journey in World Cup qualifying for Qatar 2022 against Antigua and Barbuda.

But then again, I am rooting for a story. After all, any underdog that wins makes a good story, doesn’t it?

OFFSIDE REMARKS: What an embarrassing debacle for the USMNT

OFFSIDE REMARKS: We’re living in the most volatile time in U.S. soccer history