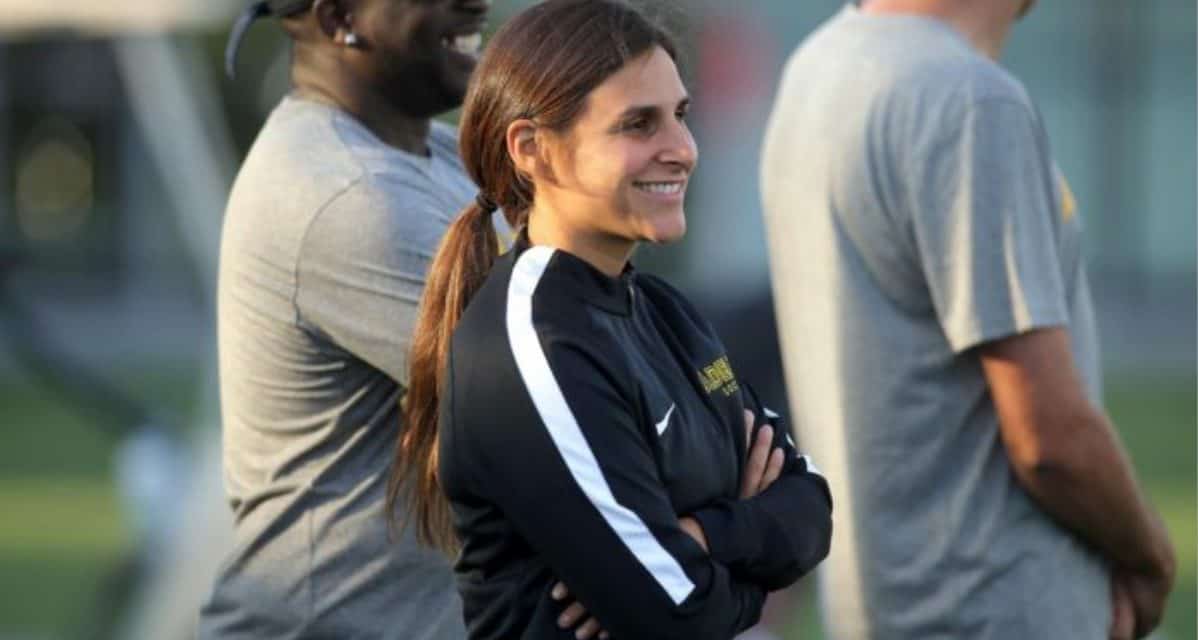 Brooke DeRosa cared for her one-yard-old daughter, goes to graduate school and finds time to be Hofstra’s goal-scoring leader in 2007. (Photo courtey of Adelphi University)

This story was originally posted on BigAppleSoccer Nov. 7, 2007

Brooke DeRosa’s life sounds like an inspirational movie than anything else.

She goes to Syracuse University to get an education and play soccer as a defender and midfielder. She gets engaged and then pregnant. She breaks up with her fiancée and returns to her Ronkonkoma, L.I. home and family and give birth to her baby.

She decides to go back to school closer to home and play a soccer season remaining on her eligibility, so she registers with Hofstra University. Coach Simon Riddiough puts DeRosa at forward and she winds up its leading scorer, helping the team reach at least the Colonial Athletic Association semifinals.

And guess what? It’s not fiction or a fairy tale. It’s all true.

DeRosa has been able to juggle taking care of a baby, going to graduate school and playing school thanks to a pair of key factors.

“It’s about time management,” she said. “I learned great time management being an athlete in college already. That has a lot to deal with itself. I got a lot of support from my family. My mom’s home. My mom’s able to watch the baby and her father is watching the baby.

“They were totally behind every decision that I made to come back to keep going to school, to keep playing soccer.

“With their positive enforcement, it made things a lot easier for me.”

At one time, however, DeRosa’s life was much more difficult and demanding as she had to deal with the emotional strains of getting pregnant, breaking up, leaving school and returning home.

“It was tough,” DeRosa said. “But staying positive was the best thing that I could do. Just looking forward, getting excited for finishing up school, watching my baby grow up and playing soccer again were really important to me.

“Soccer was such a huge part of my life so long, I didn’t just want to give it up forever. Coming back makes me really happy.”

DeRosa, a 2002 graduate of Connetquot High School, was an art major at Syracuse, where she played 2002-2004 before an injury forced her to red shirt her senior season in 2005. Then she discovered she was pregnant during the winter of 2005-2006. The relationship ended and DeRosa gave up her senior season and came home to have the baby.

She also wanted to complete her degree and still had an itch to play her favorite sport. She had narrowed her options down to two choices — Hofstra and Dowling College. She chose the former.

“First I was looking for academic reasons to come back to school because I wanted to finish my undergrad and I wanted to go to grad school,” DeRosa said. “I was looking on Long Island for the best possible school that could offer the best soccer and academics. Hofstra was one of my main choices. The other way Dowling, which was closer to my home but it was a Division II school. The reason I picked Hofstra was because of soccer and because they actually have my grad program that I was interested in.”

That grad program is education, with an emphasis on grades K through 12. “I really wouldn’t mind working with any age,” she said.

Getting back into shape after not playing competitive soccer for three years was a challenge and a half. It’s one thing to be fit, it’s another to be match fit.

“It’s difficult to get to either one,” she said. “Just getting back into a mentality for fitness was hard enough. Just thinking about running and pushing myself was hard. It’s well worth it once you get there.”

Besides exercise, DeRosa figured she would have to get back her soccer skills. So, she decided to play in not one, not two, but three leagues this past summer. She performed for the Elwood Soccer Club in a Long Island women’s league and for a men’s team in an indoor league at KK Athletics in Farmingville, L.I.

“It wasn’t the same in playing in pick-up leagues,” she said. “I was really interested to see what it was really like to play competitive soccer again because I totally forgot what it was like.

“It was pretty difficult. I was able to get back. I trained a lot. I played a lot this summer. I was on three different teams. I was just playing all the time. I was just trying to get back into that competitive mode.”

Her has helped looking after Ciera, who celebrated her first birthday Sept. 8.

DeRosa has brought Ciera to some games and practice. Not surprisingly, the infant has taken a liking to the game.

“She likes watching it on TV,” she said. “She actually dribbles the ball a little bit. She’s been walking since 10 months. I think she kind of copies everyone. When she sees soccer, I think she tries to dribble herself. She taught herself that. I didn’t have to teach her that.”

At Syracuse, DeRosa played either left fullback or central midfield.

When she joined Hofstra, Riddiough decided to put her up front. Riddiough’s best friend is St. John’s women’s coach Ian Stone, who coached DeRosa’s club team, the HBC Magic. Riddiough, who played with one of DeRosa’s brothers and coaches another at Hofstra, got to know the Magic players and learned that DeRosa’s best position was forward.

“It’s a different philosophy I guess,” he said. “I’ve always seen her as a forward.”

That was fine with DeRosa.

“It’s an exciting position,” she said. “You take people on, go to goal. I feel I have more of an impact on a team. I feel I can help the team better in that position more than any other position. It’s more of my natural position.”

The 5-4 DeRosa put her money where her mouth was and not her feet in her mouth.

“I was pretty nervous coming into the pre-season,” she said.

She scored twice in her first two matches.

“It was just luck,” she said at the time.

Added Riddiough: “She was everything I expected and more.”

The 23-year-old DeRosa since has collected a team-high 11 goals this season (plus five assists), it’s obviously more than luck.

“I am performing like this because of the team around me,” she said.

Asked if there was DeRosa goal that has stood out, Riddiough admitted there was none.

“She basically has been a highlight reel,” he said. “Each game she has done something special.

“She had a tremendous season. She’s been awesome. In some respects, the couple of years she was off added to a game. She’s a more mature player.”

On and off the field.

“She’s a fantastic leader,” he said. “It was just what we needed this year. We needed somebody who was going to be a leader for us. She is a quiet leader and added a little bit of maturity to the team. It’s a perfect fit.”

What would make the end of this reality movie even more fitting is for DeRosa to score a couple of more goals this weekend and Hofstra wins the CAA crown. The Pride takes on James Madison at 5 p.m. Friday.

“We have the ability to win this tournament and move on to the NCAA’s,” she said. “It will be my first time in the (NCAA) tournament. I’ll be really happy getting to the tournament.

“I’m really happy about how everything has turned out this season, the way the team has performance. I can’t ask for anything more.” 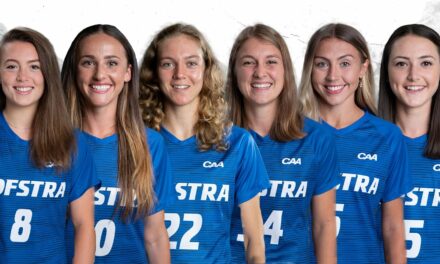