QUEENS, N.Y. – Fresh off three consecutive victories to open up the 2021 spring slate, the St. John’s University women will kick off its Big East season, welcoming Villanova University to Belson Stadium for a 6 p.m. meeting Thursday.

The game will be produced live by SJU-TV and can be viewed on ESPN3, available on the ESPN.com/watch and ESPN app. Ralph Bednarczyk will have the call from Queens.

Jessica Garziano, the Big East offensive player of the week, has scored five goals, including a hat-trick in the 3-0 victory over Sacred Heart Feb. 25. The Melville, N.Y., native leads St. John’s in scoring with five tallies, good enough to rank second in the conference.

Goalkeeper Naya Lipkens, who was named to the conference honor roll on Monday, has been excelling in early season action for the Johnnies. With two shutouts, Lipkens boasts a 0.42 goals-against average.

The Red Storm was ranked No. 8 in the United Soccer Coaches East regional poll. The team sits second in the conference for goals (10), assists (8) and points (28).

After going winless in the first three games of the 2021, Villanova registered its first victory of the season on Sunday in a 1-0 win over Saint Joseph’s. The Wildcats enter league play with a record of 1-3-0. Graduate student Sam Rosette, a product of the Bronx, scored Villanova’s lone goal of the season.

Thursday will mark the 28th meeting between the schools with Villanova owning a 13-11-3 record. The Johnnies will look to defeat the Wildcats for the eighth straight time. St. John’s last two wins over Villanova have been come-from-behind effprts. Zsani Kajan, the Big East preseason offensive player of the year, saw success against the Wildcats last season, as the Budapest, Hungary native recorded the second hat-trick of her Red Storm career in a 4-3 victory. 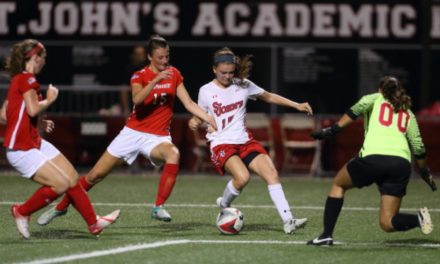 BUTLER DID IT: St. John’s men lose on Golden Goal