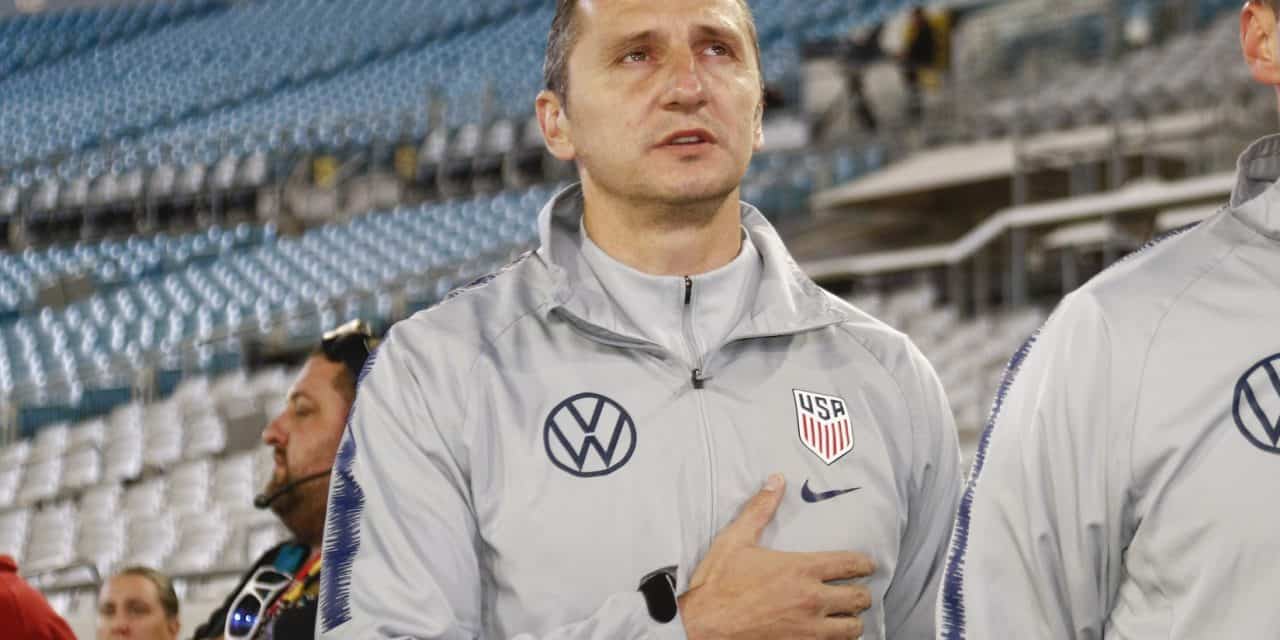 Vlatko Andonovski: “Everything that we do in camp, in training, in games, everything that they’re going to do in the games, in clubs is a is going to be important as well because ultimately it may come down to the certain form that the player is in if both players are equal. (Reinhold Matay-USA TODAY Sports)

Vlatko Andonovski doesn’t seem to be in much of a rush in naming an 18-player roster for the Summer Olympics.

Now, don’t get us wrong. The U.S. women’s national coach is evaluating every player that participated in the She Believes Cup and the ones overseas that could not make the four-team tournament.

Andonovski hasn’t set a time to name the roster, but it certainly will be a more difficult process. The roster for the 2019 Women’s World Cup included 23 players. So, without considering any of the newcomers, five players from that squad will be left off the Tokyo Summer Games roster.

“Selecting the roster is an ongoing process,” Andonovski said after the USWNT registered a 6-0 win over Argentina to capture the SheBelieves Cup Wednesday night. “Everything that we do in camp, in training, in games, everything that they’re going to do in the games, in clubs is a is going to be important as well because ultimately it may come down to the certain form that the player is in if both players are equal.

“So, a lot of things come in play … from the performance, held fitness, team position that they play and also, versatility and specialty that they have There’s so many things and boxes that they need to check in order to in order to be on the roster. As we go forward, I’m sure that I’m going to have more answers or more clear answers, but right now we’re still evaluating everyone. The list is still pretty big, I guess, in compared to 18.”

Some familiar foes will be competing in the Olympics, including Brazil, Canada, the Netherlands, which the USA defeated in the 2019 final, 2-0.

Even though the draw hasn’t been held yet. It is expected to be done in April, the USWNT staff has its periscope up scouting other teams.

“Every game, any Olympic participant, or national team that that is participating in Olympics, we’re watching,” Andonovski said. “We’re scouting, analyzing, breaking down to every single moment possible. Just for example today we had Netherlands vs. Germany. … Any game that that happens to women’s soccer our scouting department and analytics department goes through very thorough, very detailed and break it down to the smallest detail.

“It comes  back to the technical staff, and we do the same in the analyze it, to, to prepare for the biggest tournament. When we face any of those any of those teams, I hope that we’re going to be as prepared as we can get.”

REACHING THE SUMMIT: SheBelieves event to be held in LA and virtually