BLACK HISTORY MONTH (DAY 6): One man, two passions: Derrick Etienne found a way to combine a soccer career with being a pastor 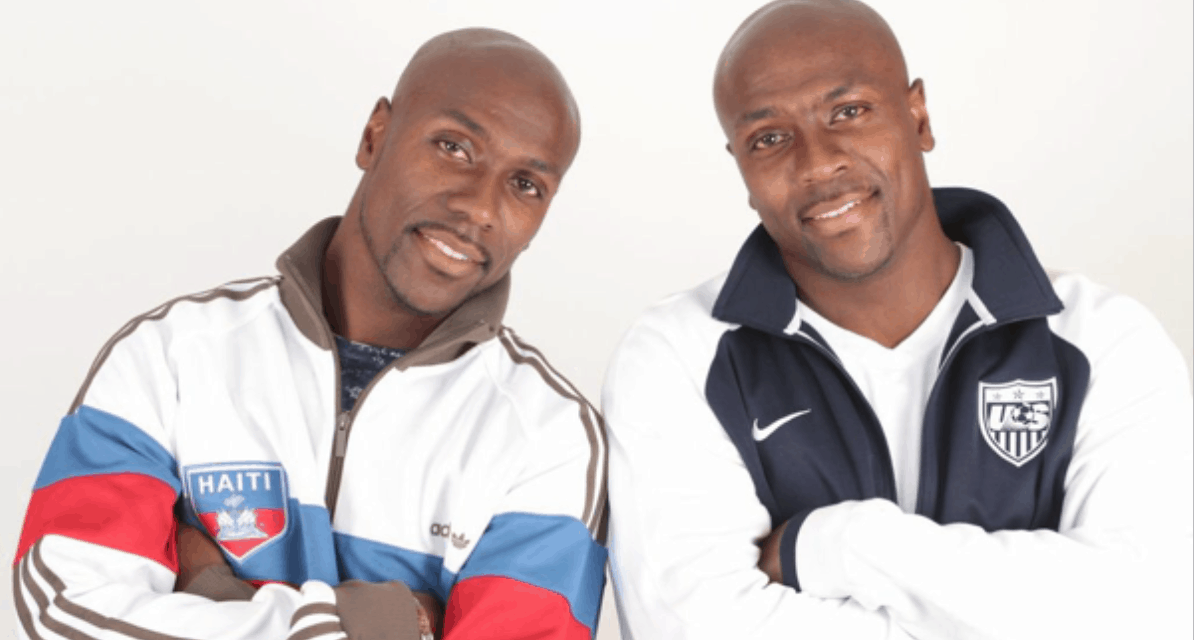 Darrell (left) and Derrick Etienne have made a formidable duo as pastors and preachers. (Photo courtesy of the Etienne family)

Since February is Black History Month, FrontRowSoccer.com will post one story a day about soccer players of color from the United States and the rest of the world. This multi-part series we will feature players from Jamaica, Cuba, Haiti, U.S. Virgin Islands, Ghana, Bermuda, Brazil, Trinidad & Tobago and the United States. Today, we feature Derrick Etienne, who combined two unique careers at the same time when he played for the Long Island Rough Riders. This story originally was posted at BigAppleSoccer.com in 2005.

On Saturday nights, Derrick Etienne battles opposing defenders, sometimes getting physical while trying to find the back of the net for the Long Island Rough Riders.

Some 12 hours later on Sunday mornings, he preaches the word of God and peace to his small, but growing congregation in Paterson, New Jersey in the United States.

Etienne realizes he is one fortunate man to have the best of both worlds. He has two jobs and passions in life. He is a football player and a pastor in a church. Actually, he is co-pastor of the Latter Glory Church with his identical twin brother, Darrell.

“My passion for soccer gives me the opportunity to be an example to be a witness for a lot of the players and my teammates,” he said. “At the same time for my ministry, I can use sports and athletics to reach some of the younger people because that’s that they’re in involved in as well.”

With a wife and three children, Etienne admits it is sometimes difficult to live his unique “double life.”

“It is very time consuming,” he said. “But somehow I find ways to maneuver around. The coaching staff understands what I do. They’re very cooperative with me. I try to set things up where nothing really conflicts as far as practice and the ministry is concerned. It does help that my twin brother is working with me. Sometimes I have to go solo and represent the both of us and vice versa.”

But football can be a physical and violent game. How does Etienne come to grips with that?

“The way I like to look at it is soccer is what I do, but a pastor is who I am,” he said. “I love soccer. I love the game. Being that I get paid for it, that’s what I do. It’s a job. But I do have passion for it. For Sunday morning, I don’t have to get paid for it. I volunteer my service. It says who I am. I love to minister and to encourage people.”

But sooner or later Etienne, a forward, will encounter opponents who tackle him roughly or curse at him.

“What I do is the same thing I tell my son,” he said. “He’s been experiencing that as well at eight-years-old. I tell him the best way to respond is to get the job done by scoring. I’m a forward. They’re tackling me. They’re saying nasty, negative things. The best way to quiet them down or to respond is to put the ball into the back of the net. That’s what helps me and motivates me. I turn the negativity into motivation.”

It shouldn’t be surprising that the Etienne brothers have passion for religion and football. Their mother was a minister and their father played the sport professionally in Haiti.

Once a member of the Haitian national team, Derrick (and Darrell) graduated from Virginia Commonwealth University as a communications major and a minor in religion and joined the Richmond Kickers, then of the A-League (the second division of American football’s pecking order) from 1998–2000.

“Having the opportunity to play professionally is once in a lifetime,” Derrick said. “But I still held on to my faith the entire time, staying out of trouble, making sure I had a level head, doing the right thing.”

He and his brother moved to northern New Jersey in the suburbs of New York City and Derrick joined the Rough Riders in 2001.

But it was at a price — a good 120-mile roundtrip commute to practice and games at night several times a week. The team usually practices at night and since Derrick lives across two major bridges in another state, his commute to the eastern New York City suburbs can take as much as two hours.

When he isn’t playing with the Rough Riders — the season runs from April through August — Etienne is a substitute teacher for grades six through 12, which gives him an opportunity to be a role model with the inner-city youth.

Etienne said tells the youth: “Look, I am not selling drugs. I’m not here doing the wrong thing. The same way I’m here making something of myself, you guys can do the same.”

The congregation of the Latter Glory Church meets every Sunday in a ballroom at the Radisson hotel in Saddle Brook, New Jersey. About 130–140 people show up on a given Sunday, said Etienne, who added that almost 200 people are church members.

The Etiennes and their congregation certainly don’t let the fact they pray in a hotel ballroom take away from their zest and enjoyment.

The 90-minute Sunday service is part gospel revival with Derrick leading the congregation in song and Darrell playing the organ.

Derrick and Darrell sometimes will do sermons together, one brother talking for several minutes and the other picking up where his twin left off.

It’s a unique way to get the message out and attract new members.

For example, Brian West heard the Etienne twins preach at another church and was impressed with “way they taught the word and preached the word. And them being so young — I’m old enough to be their father — from Day One we clicked.”

He has become a trustee of the church and even a football fan.

Barbara Simmons listened to a New Year’s Eve sermon by the Etienne twins in 2003 and eventually joined the church. She is now administrative assistant.

“It definitely is a unique style,” Simmons said. “We’re definitely blessed. What comes out of their mouth is just from God.”

Beyond the construction of a church, Derrick has some lofty goals.

“Our passion is really with youth,” he said. “We want to have a youth outreach center. Reach out for their needs and give them a same haven to come, alternatives to the street. They could come and they can play sports. They can come and have computer centers.

“We also want to have feeding programs to feed the homeless and less fortunate. We’re in Paterson, where we feel that’s where God has called us to.”

Derrick admitted he doesn’t know how long he will be able to continue his unique double life. He turned 31 in August and his son, Derrick, Jr. is eight-years-old — getting to an age where his father would like to be around him more.

“I might as well toot my own horn. My son is really good [at soccer],” he said. “I just want to be there for him and invest in his future as well. So I might make the transition into a Soccer Dad and being heavily involved in the church. That’s going to consume a lot of my time. I don’t know how much longer. Maybe two, three years, max.” 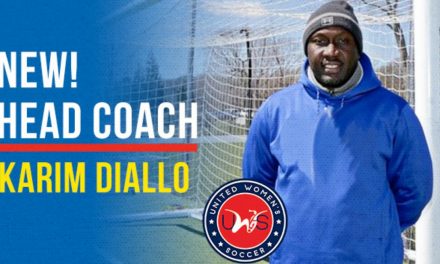 NO PRESSURE: Riders coach Roche: ‘We have nothing to lose’ vs. Louisville in Open Cup 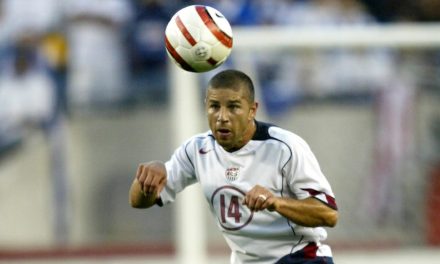 HISPANIC HERITAGE MONTH (Day 11): Armas looks back on his career after his final game (2007) 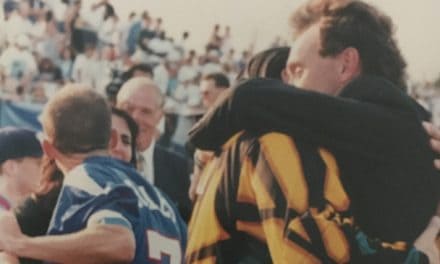