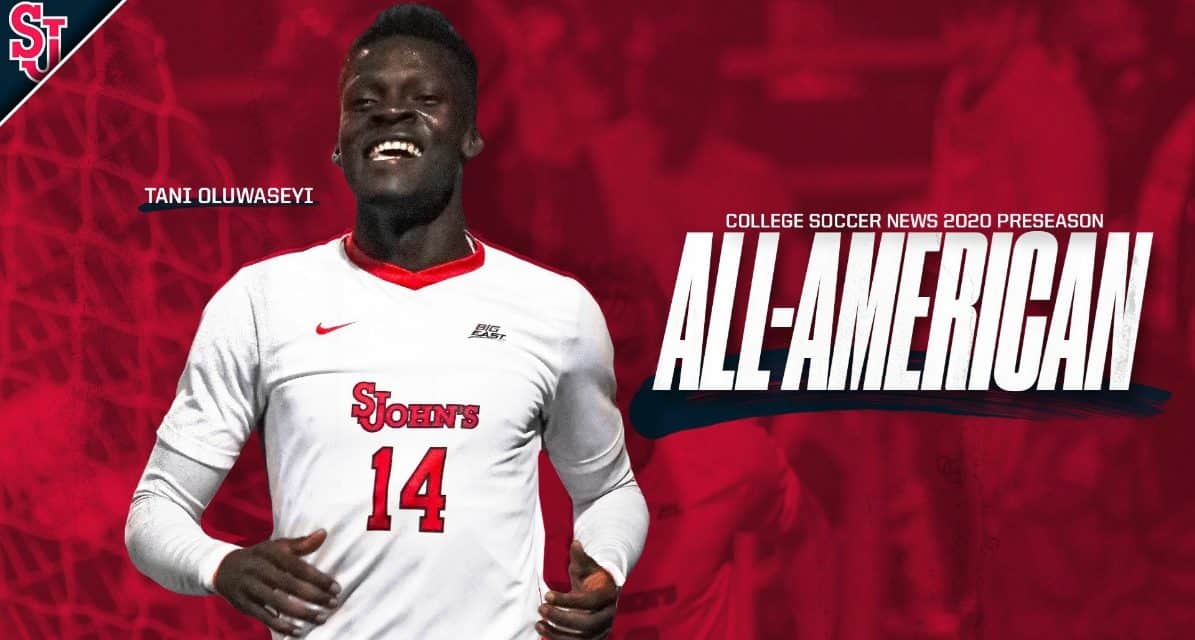 QUEENS, N.Y. – After becoming the first St. John’s University player in nearly 25 years to win the Big East offensive player of the year award in 2019, Tani Oluwaseyi has been predicted to repeat this spring in a preseason vote of the league’s coaches.

The announcement of Oluwaseyi’s preseason honor on Monday afternoon coincided with the release of the Preseason All-Big East team and the league’s preseason coaches poll. Two other St. John’s juniors, Einar Lye and Brandon Knapp, earned spots on the preseason All-Big East team while the Johnnies were predicted to finish third in the Big East’s East Division behind defending national champion Georgetown University and Providence College, another NCAA Round Division I of 16 squad from 2019.

As a sophomore in 2019, Oluwaseyi led an explosive Red Storm offense, finishing the season with 11 goals and five assists in 20 appearances despite making only eight starts. He led the Big East and finished 27th nationally in goals while his 27 points were good enough for second in the league and 31st in the country. Oluwaseyi became the first St. John’s player since Simone Salino during the 2003 College Cup campaign of to record double-digit goals in a season. The Mississauga, Ontario product also garnered a spot on the United Soccer Coaches All-Region first team.

Lye, a native of Undheim, Norway, started all 20 matches for the Red Storm in 2019, finishing second on the team in goals (5) and assists (5). A third team All-Big East selection and a member of the All-Region third team, Lye recorded a pair of two-goal games against Iona and Villanova while providing the game-winner against DePaul at Belson Stadium.

Another third team All-Big East honoree a season ago, Knapp finished third on the squad with four goals while serving as a key part of a Red Storm defensive unit that allowed fewer than one goal per game and registered nine clean sheets. Having secured the title of team captain as a sophomore, the Abingdon, Md., native played 1,846 out of a possible 1,854 minutes, only leaving the pitch during the final minutes of the Red Storm’s 4-0 win over Villanova University. One of his goals came during the second round of the NCAA Tournament, as the Archbishop Curley product opened the scoring in the Red Storm’s 2-1 win over Syracuse at Belson Stadium.

Oluwaseyi, Lye and Knapp helped the Red Storm record its best season in more than a decade during 2019, as the Johnnies went 14-5-1, finished second in the Big East regular season and reached the NCAA Round of 16 for the 12th time in program history. The Red Storm rose as high as No. 4 in the United Soccer Coaches poll and no. 1 in the RPI during the course of the regular season and earned the NCAA Tournament’s No. 16 seed, marking the ninth time in program history that the Johnnies earned a national seed. Oluwaseyi was one of three Johnnies to claim major conference awards at season’s end, as Jan Hoffelner was named the BIG EAST Goalkeeper of the Year and Dr. David Masur led the Big East coaching staff of the year. 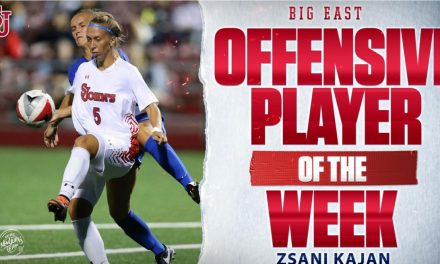