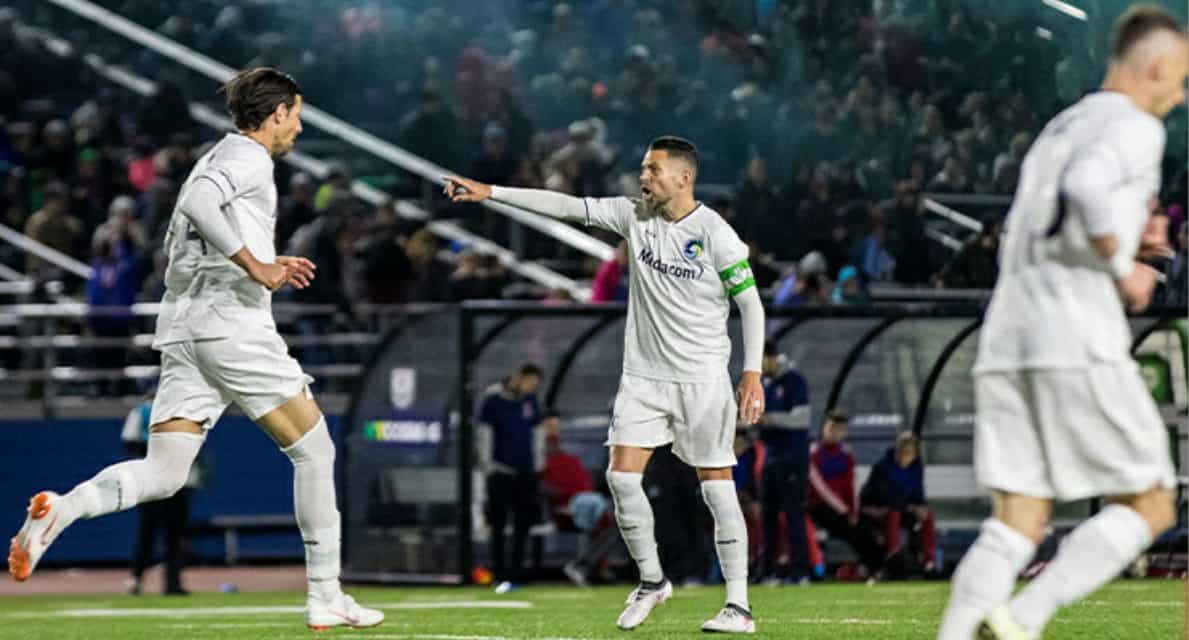 Danny Szetela had two shots on goal. (Photo courtesy of the Cosmos)

UNIONDALE, N.Y. – If there was any doubt as to which team was the Cosmos’ No. 1 nemesis these days, Detroit City FC reminded them about it Wednesday night.

Playing without its No. 1 goalkeeper and head coach, the Motown City team played a disciplined game to deny the Cosmos any serious scoring threats en route to a scoreless draw at Mitchel Athletic Complex in the National Independent Soccer Association fall season.

The Cosmos (1-0-2, 5 points) played their first Eastern Division game in 19 days since a 3-1 victory over New Amsterdam FC on Aug. 21 while Detroit City FC finished the fall regular season at 1-1-2 and five points.

Three goalkeepers in the two teams shared the shutout.

Cosmos keeper Jesse Corke, who was not severely tested, earned a clean sheet while the visitors used a goalkeeper in each half. Jean Antoine was in the nets for the opening 45 minutes while rookie Parker Siegfried guarded the goal in the final half.

Both teams played without key performers.

Cosmos midfielder-forward Darwin Espinal did not suit up as he was sick over the weekend.

Detroit’s No. 1 keeper, Nate Steinwascher, did not make the trip because he could not get time off from his day job as an accountant. Detroit City FC head coach Trevor James also stayed home as assistant coach Javi Bautista ran the show.

Despite dominating possession in the first half, the Cosmos could not engineer many quality chances against a difficult defense that closed them down in and around the penalty area.

Shavon John-Brown had the first opportunity of the match five minutes into the match as he fired a shot from the top of the penalty area that Antoine caught.

Midfielder Danny Szetela certainly found himself in the middle of the action at both ends of the field. While on attack, he had a shot blocked in the 23rd minute and had a header caught by Antoine in the 27th minute.

The Cosmos team captain was awarded one of four yellow cards in the opening 45 minutes after colliding with midfielder Ibrahim Conteh. Both players were shaken up as the Szetela needed a green bandage wrapped around the top of his head to continue for the remainder of the half. Szetela played the second half without the bandage.

Siegfried, a former New York City FC draft choice, who signed with the team on Tuesday, replaced Antoine at halftime. Detroit City FC appeared to be content having five defenders sitting in deep while waiting for a counterattack or a set piece around the New York goal.

Second-half substitute Geo Alves probably had the hosts’ best chance in the second half as he volleyed Ansi Agolli’s long feed from the left side. Siegfried, however, gathered in the ball.

The Cosmos return to action at Chattanooga FC in their fall regular season finale Saturday at 7:30 p.m. They will begin a two-day trek to Tennessee via bus on Thursday with an anticipated arrival on Friday.