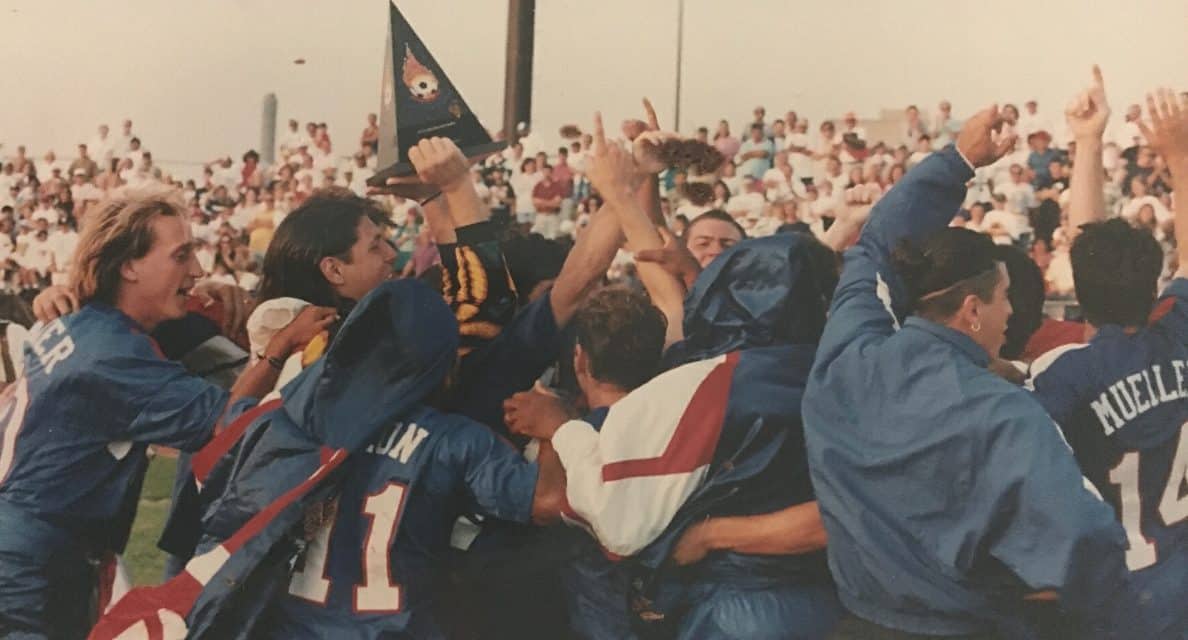 Long Island professional soccer probably will never see a team like that again.

“It was a magical season,” former Riders coach Alfonso Mondelo said. “Winning the championship at home in front of the fans in the dying seconds of the game — it will stand out in my mind forever.”

And in many fans minds as well.

In 1995, the USISL was at the top of the U.S. professional soccer pyramid. Yes, there was the A-League, but that league had only six teams and two were from Canada. And this was a year before Major League Soccer kicked off.

Today, Saturday, Sept. 5, is the 25th anniversary of the team capturing the USISL title in a memorable clash with the Minnesota Thunder at Mitchel Athletic Complex in Uniondale, N.Y. The Riders won 2-1, on one of the most dramatic goals in New York soccer history by Giovanni Savarese.

While Savarese filled the net that season with a league-high 33 goals in the regular season and playoffs, the Riders were far from a one-man show.

Many of the gifted players went on to play and even star in MLS (Chris Armas, Tony Meola, Giovanni Savarese and Jim Rooney), while others became coaches at the youth or college level (Paul Riley has directed the North Carolina Courage to three National Women’s Soccer League titles, Richard Nuttall has enjoyed a successful career guiding the men at Hofstra University, and Kevin Anderson has guided the Columbia University men’s team), while others continued to play for the love of the game (super-sub Cordt Weinstein, Martin Munnelly, Travis Rinker, Daniel Leon, Steve Cadet, among others).

Even one “imported” player, goalkeeper Meola, played several years in the LIJSL and CJSL. The Riders had only one player from out of the metropolitan area and from out of the country, for that matter — Jamaican national team captain Paul “Tegat” Davis.

“That was the idea behind the team, trying to find all of the local talent,” Mondelo said in an interview several years ago. “The local leagues had some tremendous talent and we gave them something to aspire to. They responded very well.

“That was part of the success we had — the local players. The fans truly identified with them. It represented the hometown.” 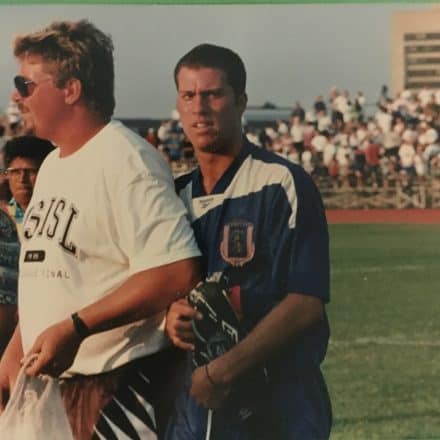 Giovanni Savarese, who scored the game-winner in the championship game, had a monster season for the Rough Riders in 1995. (Michael Lewis/FrontRowSoccer Photo)

The year prior, the team’s inaugural year in 1994, the Riders came close to grabbing the brass ring, but dropped an excruciating 2-1 extra-time decision to the host Carolina Dynamo in Greensboro, N.C.

So, the Rough Riders felt that they had something to prove. They were so confident they would win the USISL championship that original owners Chuck Jacob and Lou Ederer were awarded to host the Sizzlin’ Nine playoffs, an automatic playoff berth and to be host of the championship game.

That, of course, put an onus on Mondelo and the team not to just have a winning season but a dominating one, especially at home.

Mondelo kept the nucleus of the previous season and made a couple of additions. The talent and depth of the team was so overwhelming practices became unique training sessions, which Mondelo called “very up-tempo and very aggressive.”

“I thought that was more fun than the games,” he said. “We had so many talented players. They all brought something to the game. They all felt they should be on the starting team. Only 11 can play. It made for training sessions to be very, very competitive.”

In fact, practice became so intense that Mondelo and assistant coach Jimmy McGeough were forced to break up a few fights between players.

“It happens to every team,” Mondeo said.

“It made me think of Billy Martin’s team with the Yankees, it was so intense.”

The goals were simple: Win the USISL crown.

But before they opened at home, the Riders played three consecutive road matches, including a season-opening 2-1 loss at the Charleston Battery. But they quickly got back on track with a 4-1 win at the Myrtle Beach Boyz and a 1-0 blanking at the Rhode Island Stingrays.

Finally, on April 29, the Riders came home and did not disappoint with a 5-0 thrashing of the Albany Alleycats as Armas scored twice and assisted on two others.

The wins started to pile up and came in many different fashions. Meola was forced to make nine saves in a 1-0 victory over the Delaware Wizards. Savarese, who earned regular-season and playoff MVP honors, connected for a team-record five goals in a 10-0 thumping of the Puerto Rico Islanders. Masters, who finished with 19 goals, enjoyed a hat-trick himself, scoring all the Riders’ goals in a 3-1 win over the Connecticut Wolves.

The Riders even defeated the U.S. Olympic team that was preparing for the 1996 Summer Games in Athens, 3-0, in a friendly, eventually leading to the firing of coach Timo Liekoski and the hiring of Bruce Arena.

The Riders closed out their home schedule at 11-0 thanks to a 7-2 whipping of the Baltimore Bays.

Part of the mission was accomplished, but the Riders needed to win four more games in the playoffs.

They barely got past the Monterey Bay Jaguars, which boasted several future MLS players, including Paul Bravo and Hauppauge, N.Y. native Mark Semioli, 2-1, on a late goal by Weinstein. They secured a 4-1 triumph over the New Mexico Chiles as Savarese struck for a hat-trick. They clinched a berth in the final with a 5-2 victory over the Tampa Bay Cyclones as Savarese connected for another three goals, including two within a span of 69 seconds, in the second half to break it open.

On Sept.4, the two best soccer teams in the land clashed at Mitchel. A crowd of 4,118 crammed into the small stadium, the largest to watch the Riders on Long Island, take on the Minnesota Thunder.

The fans certainly got their money’s worth and witnessed a rare and unique timing situation. Instead of the standard 90-minute running clock, a 60-minute stop clock was utilized (the USISL used some experimental rules that year, and the running clock was one of them).

The Riders drew first blood with an Armas score with only 44 seconds left in the opening half past goalkeeper John Swallen. But the Thunder equalized four minutes into the second half on a goal by first-half substitute Magee.

With the game in the final minute and seemingly headed for extratime, Meola punted the ball down field. The ball was supposed to go to Savarese on a breakway, but instead found midfielder Danny Mueller. Mueller passed to Savarese and the forward knocked the ball to Armas on the right wing. Armas pulled Swallen out of the net and crossed the ball to Savarese, who scored from six yards with six seconds left in regulation.

“That is the most important goal of my life,” Savarese said at the time. “It’s a great feeling to win the championship.”

Until his goal, the Venezuelan international’s only dangerous opportunity was a point-blank header Swallen caught in the 43rd minute. He experienced a long afternoon as defender Chato stopped him cold.

“I was looking forward to scoring a goal,” Savarese said. “I wasn’t getting frustrated. I wanted to have it.”

And he got it — in spectacular fashion.

“He’s had a great year, even a better playoffs,” Armas said. “What a way to end it. Six seconds left – with an exclamation point. It’s a perfect ending for us.”

GETTING THE SPOILS: Lady Riders brought home a lot of hardware in ’95

LONG ISLAND’S OWN: 27 years ago, Rough Riders ruled USISL on a dramatic, late goal by Savarese