MIAMI – FIFA and Concacaf Wednesday conducted the official draw for the confederation qualifiers to the 2022 World Cup.

The new Concacaf qualifiers are comprised of three rounds and provide countries with the chance to compete for the confederation’s three and a half World Cup spots.

The first round will be played between countries ranked 6-35 based on the FIFA men’s rankings as of July 16. The 30 men’s national teams have been drawn into six groups of five: 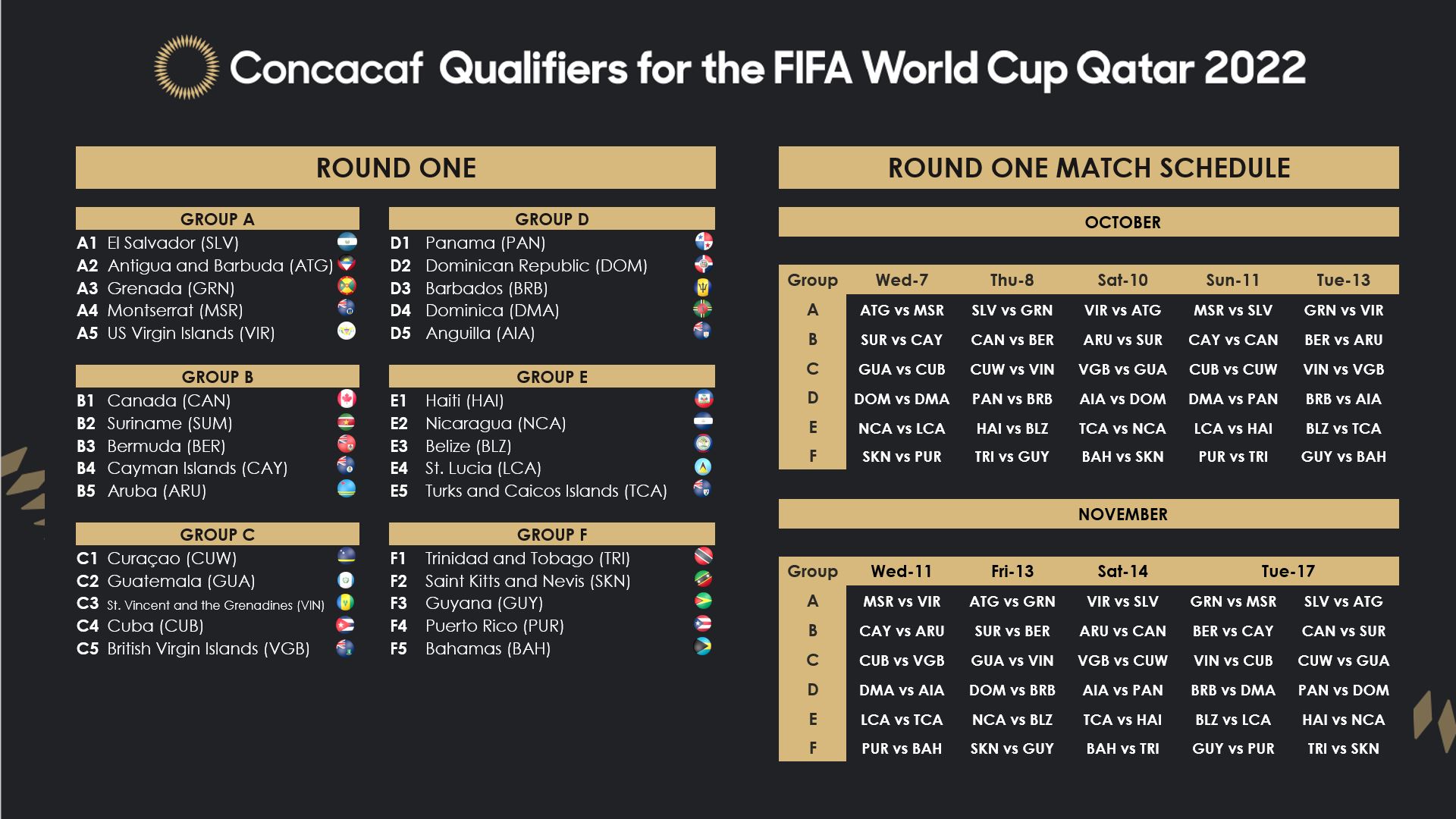 Each team will meet every other team in their group once, playing four matches; two home and two away. These games will be played in the FIFA match windows of October and November. At the end of the first round the six group winners will progress to the second round.

The second round (six teams) will be played between the group winners from the First Round, with the matchups pre-determined as follows:

The teams will play home and away in a direct elimination format in the FIFA match window of March 2021. The three winners will progress to the Final Round.

The final round of the qualifiers will see the three winners from the second round join countries ranked 1-5. The eight teams will play each other home and away, with each team playing 14 matches.

The team’s positions have been drawn and will be as follows: 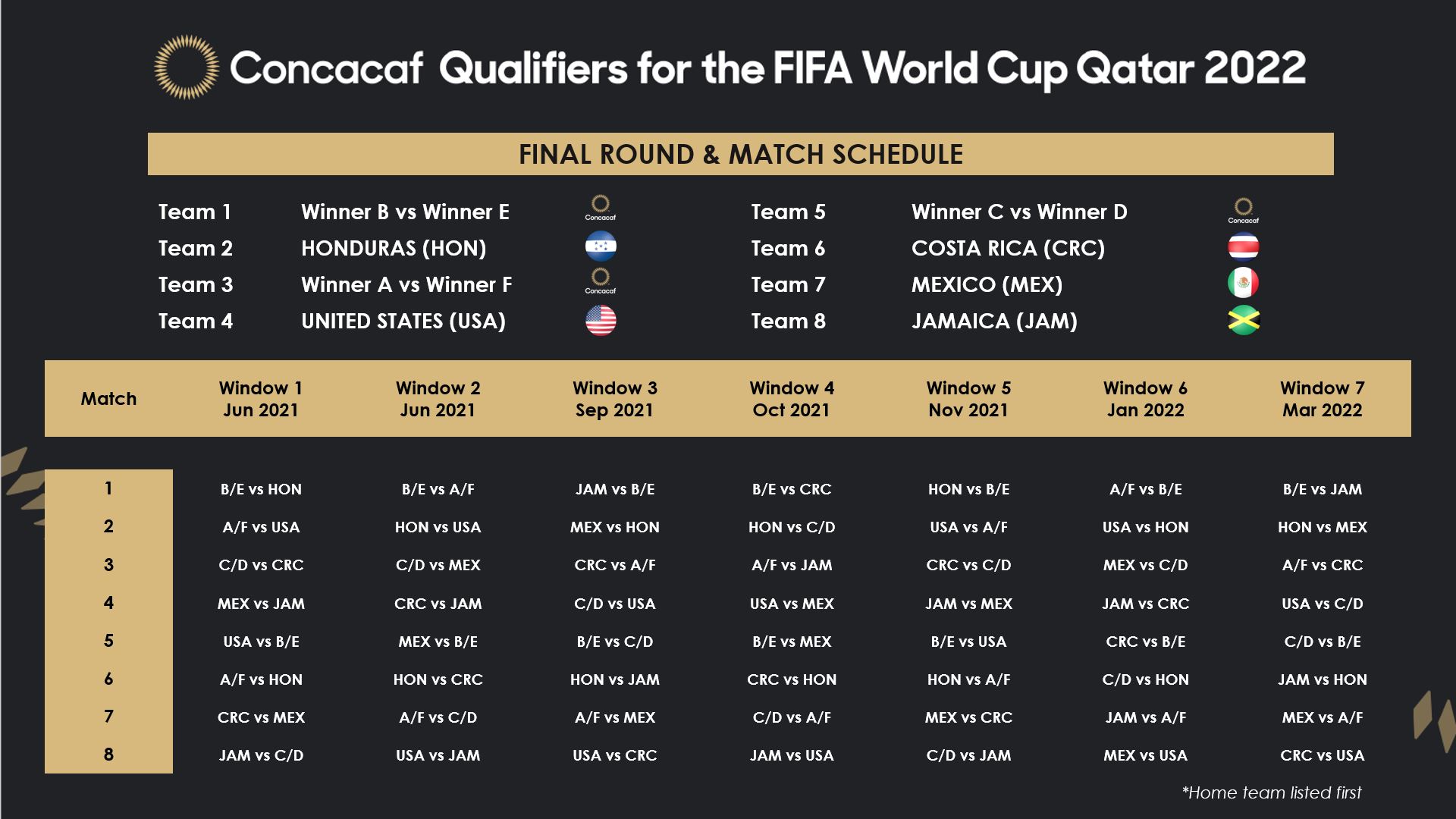 At the end of the final round, the top three finishing teams will qualify for Qatar 2022.

The fourth-placed team will qualify for the FIFA Intercontinental Playoff, scheduled to be played in June 2022.

“The FIFA World Cup is the pinnacle of global football and the competition that players and coaches in our region, and the world over, dream of and aspire to compete in,” Concacaf president and FIFA vice president Victor Montagliani said in a statement.

“Today’s draw is the beginning of those dreams for our member associations, their national teams and of course the fans. It will create real excitement and anticipation in the Concacaf region.

“At Concacaf we are committed to providing more competitive opportunities for all our national teams, as clearly demonstrated by the expansion of Gold Cup and the hugely successful introduction of the Concacaf Nations League. The format for these World Cup qualifiers fits with that commitment, with all teams guaranteed at least four matches and having a clear path to the Final Round and Qatar 2022 itself.

“I know that many fans and communities in our region continue to face very challenging circumstances. My thoughts are with them and I hope that the prospect of an exciting World Cup qualification campaign in Concacaf can provide some hope and anticipation during such a difficult time for the world.

“To all the teams involved in this draw, and to their fans: your road to the FIFA World Cup Qatar 2022 is now set. Good luck, Buena suerte, bonne chance, succes.”

The draw, held at the Home of FIFA in Zurich, was conducted by FIFA’s director of tournaments and interim competitions Jaime Yarza, with the assistance of former Concacaf players Shaun Goater (Bermuda) and David Suazo (Honduras).

CONCACAF ELECTIONS: To be held at Ordinary Congress in Aruba April 8

THE FULL SCHEDULE: For the CCL quarterfinals

SOME WORLD CUP MUSINGS (DAY 18): The soccer gods always have the last laugh and sometimes makes us cry