The Rochester Lancers must wait a week for their return to the Major Arena Soccer League.

The MASL announced Monday that the opening weekend series between MetroStars Canada and the Lancers in St. Catharine’s, Ontario has been postponed due to unforeseen logistical issues in regard to the playing field for this weekend’s series.

The games were scheduled for Friday night and Sunday afternoon.

“This has never happened in my career. doing indoor, outdoor soccer, a game getting postponed,” Lancers owner Salvatore “SoccerSam” Fantauzzo said on Socceer is a Kick in the Grass radio show Monday night. “I’m not real happy right now, but I’ve just got to look forward.”

MetroStars officials noticed there were issues with their boards when they attended an exhibition game between their team at Utica City FC Sunday night, according to Fantauzzo.

“The Canadian owner decided to look at the boards and realized that the boards in St. Catharine’s are very similar to the ones in Utica and unfortunately [discovered] they don’t have the right board system,” Fantauzzo said.

Fantauzzo then explained it.

“In simple lingo, the one side of the field where the Zamboni comes out of that is flush with the ground,” he said. “The other side, in most hockey arenas, is like a foot higher where the seats are. So, hockey arenas have been doing across the country, as they have in Utica, they have built a makeshift wall, an indoor soccer wall with a goal built into it. I don’t think that the owner of the Canadian MetroStars realized that until he showed up last night … and ‘Hey, wait, I might have an issue here.’ They looked into it and they were right. They can’t put the goal in.”

The MetroStars tried rescheduled the game in Canada and even Utica but could not find a suitable venue.

When they were looked for a venue for their M2 team last year, the Lancers encountered a similar problem at the Rochester Institute of Technology. While the arena had many amenities the Lancers nixed the idea of playing there because of that board issue.

“When we looked at RIT, we saw the need for that exact system and it’s an expensive system, so I’m not sure a lot of this is worth doing,” Fantauzzo said. “We’re going forward. We’re looking forward to our home opener, the weekend of Thanksgiving.”

The Lancers will open their season at home against Utica City FC at the Dome Arena in Henrietta, N.Y. Friday, Nov. 29 at 7:00 p.m. ET. Lancers head coach Doug Miller and Fantauzzo spent most of Tuesday setting up the field at the Dome Arena.

The MetroStars will kick off their season on Dec. 7 on the road against the Baltimore Blast.

The MASL campaign begins this weekend with seven games between Friday Nov. 22 and Monday, Nov. 25. All games will be available live on MASL.tv and MASLSoccer.com.

90 PERCENT CHANCE: That the Lancers will play in MASL 2 this winter

WHICH ARENA WILL IT BE?: Lancers close to making announcement on MASL return; they must decide between downtown or suburban venue 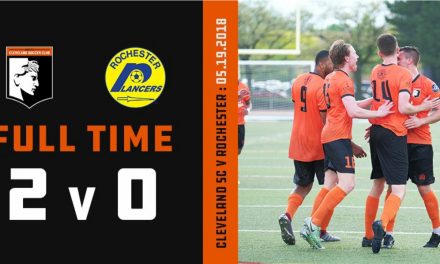 OFF ON THE WRONG FOOT: Lancers drop season opener in Cleveland