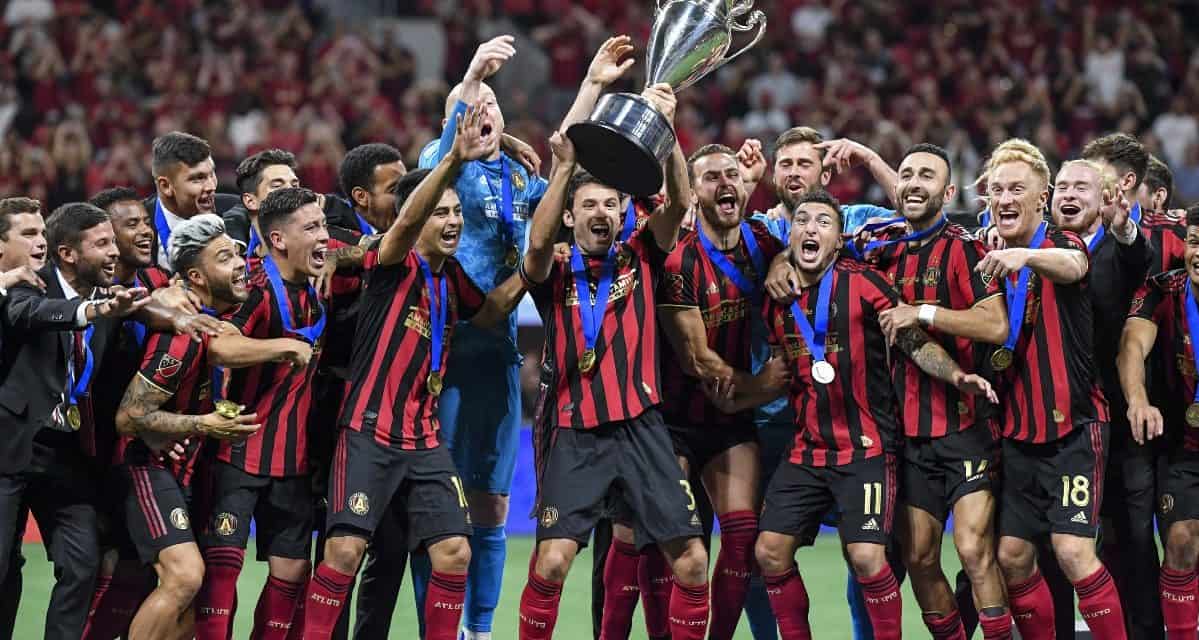 ATLANTA – Despite playing a man down for the final 16 minutes, Atlanta United FC captured its first Lamar Hunt U.S. Open Cup title with a 2-1 victory over Minnesota United FC in front of a tournament-final record crowd of 35,709 at Mercedes-Benz Stadium Wednesday night.

A 10th minute own goal combined with Pity Martinez’s 16th-minute finish gave the Atlanta enough of a lead to survive an early second-half strike from Robin Lod and Leandro Gonzalez Pirez’s 74th-minute red card to give the club its third piece of hardware in the last nine months.

Having collected MLS Cup in 2018 as well as the Campeones Cup weeks ago, the Open Cup represents the third piece of hardware in Atlanta United FC’s three-year history. The 10th MLS club to win U.S. Soccer’s National Championship, Atlanta earned the $300,00 prize awarded to competition’s winner and a berth in the next edition of the Concacaf Champions League.

“It is always nice to win trophies,” Atlanta head coach Frank de Boer said. “I think that is why you start playing soccer, because you love it, but also because you want to win, and today, we achieved something very beautiful for the club and for the players. Of course, we have a short history as Atlanta United FC, but to win the US Open Cup in our third year is a fantastic achievement and compliments everybody who made this possible.”

Added goalkeeper Brad Guzan: “It’s a good feeling. We talked before the game. We talked about being a winning club, winning trophies, being a big club,and that’s what it’s about. We held on in the second half. We’ve done enough,and it feels good.”

The triumph also qualified Atlanta for the 2020 Concacaf Champions League.

“Listen, this year going into the Champions League, on the back of MLS Cup short rest, this and that whatever, new manager changes, we certainly weren’t at our best at the beginning of the year – and so, now, to have a second go at it, you know, we want to try and show that we can compete with the best in the region,” Guzan said. “I think Champions League obviously allows us that opportunity. But, we’re certainly better than what we showed this year in Champions League, and so I think next year could be potentially a different showing if we make sure we get off to a good start.”

Charged by the largest crowd to witness an Open Cup final, Atlanta came out with all cylinders firing and needed only 10 minutes to find the scoresheet. Working well up the right, Martinez unlocked the Loons’ backline by sending Gonzalez Pirez to the end line where his cross took an awkward deflection off Minnesota defender Chase Gasper and looped over goalkeeper Vito Mannone before tucking into the back left post.

Minnesota nearly struck back two minutes later when Jan Gregus’ free kick from the right picked out Michael Boxall, but the New Zealand international nodded his effort over the empty net.

The hosts survived the scare and increased their lead in the 16th minute. Justin Meram strolled up the left unchallenged and centered a ball to the penalty spot for Martinez as the Argentine attacker drilled an emphatic effort past Mannone to make it 2-0.

Down by two goals, but not nearly out, the visitors responded just over a minute into the second half. Catching the Atlanta backline asleep, right back Romain Métanire slotted a long ball down the flank for Kevin Molino, whose centering pass picked out Lod, allowing the Finnish striker to put home his first goal for the club with a deft volley to beat goalkeeper Brad Guzan at the left post in the 47th minute.

“We dug ourselves a whole with the two goals we conceded early, but I thought the attitude of the guys was immense at times. We said to them at half time, ‘can we go and get the next goal?’ ” Minnesota head coach Adrian Heath said. “If we do, we feel there is something for us. And we did. As the game wore on, it was more desperation for them. Westarted to use the ball better, circulated the ball well. As you look back over the 90 minutes, we probably had four or five really good chances. Disappointing. Can’t fault the guys for their effort. A little bit too little too late.”

Minnesota United received a greater path to an equalizer in the 74th minute. Having picked up a caution for dissent only three minutes earlier, Gonzalez Pirez was shown a second yellow card for an off the ball grab of Molino at midfield. The ejection gave Minnesota a man advantage for the remainder of the game. Head coach Adrian Heath attempted to capitalize by immediately inserting 2019 Open Cup Golden Boot winner Darwin Quintero (six goals).

The visitors saw their final chance go begging in the fourth minute of stoppage time. A cross from the left was headed down by Ike Opara at the back post, only to see Michael Boxall volley his close-range effort over the bar.

Guzan called the final minutes of the game “chaos.”

“Leandro [González Pirez] made it interesting for us,” he said. “I don’t know if it’s a foul on the first one to be honest, but regardless, to concede so early in the second half, we were right up against it. We gave them a lot of belief, a lot of hope. had a chance or two ourselves (and) couldn’t find the third one, but ultimately, like I said, we’ve done enough and held on.”