QUEENS, N.Y. – With the start of the fall season just over two months away, St. John’s men’s soccer head coach Dr. Dave Masur has announced the addition of nine student-athletes to his team for the upcoming campaign.

One of two European recruits in the class, Ashrafi is a 6-foot-2 midfielder from Cologne, Germany, who made 20 appearances and was named team MVP in 2018-19 with VFL Alfter in Germany’s fifth division. Prior to joining VFL Alfter, he played with Bonner SC from 2016-18, making 45 appearances for the club.

Coles, a local product from Hauppauge High School, turned in a highly successful prep tenure on Long Island. A three-year all-state selection and three-year league MVP, Coles helped the Eagles rack up four straight league championships during his high school days. As a junior, he tallied 18 goals and 11 assists. On the club circuit, Coles played for Barca Academy, helping his team capture the New York State Cup in 2016. He was also selected to train with the New York Red Bulls Academy.

A midfielder out of Council Rock North High School in Newtown, Pa., Finneyfrock was named to the 2018 Bucks County Courier Times Golden First Team after finding a spot on the Second Team in 2017. He was also named to the All-Suburban One League First Team as a senior after scoring five goals and leading Council Rock North to its third consecutive Division Championship. His team also reached the quarterfinals of the state championship during his sophomore and junior campaigns and upset two-time defending state champion Conestoga this past postseason. Finneyfrock played for Matchfit ECNL on the club circuit.

Hoffelner comes to Queens with plenty of collegiate experience, having most recently made 18 appearances for the Blue Hose of Presbyterian this past season. The Frankfurt, Germany, native won eight games and pitched six shutouts, turning in a 1.04 goals against average and making more than three saves per outing. Two of Hoffelner’s clean sheets came in the opening two matches of the Big South Tournament, helping the Blue Hose earn a berth in the conference championship game for the second straight year.

As a freshman at Iowa Western Community College in 2017, Hoffelner helped the Reivers go 11-3-1 and secure a spot in the Region XI title game. He went 7-2 as a starter with five shutouts, compiling a 0.67 goals against average to go along with an .813 save percentage.

The second recruit in the 2019 class out of New York, Marra recently wrapped a sensational career at Ossining High School. As a senior, he posted 24 goals and nine assists, finding a spot on the All-State First Team and earning Section 1 Large School Player of the Year honors from the Westchester Journal News. On the club circuit, Marra played for the Westchester Flames and helped the club make its final Super Y League Final in 2016.

Petrucci, a goalkeeper from West Orange High School is New Jersey, made quite the impression during his lone season playing for his school as a senior, making 85 saves and anchoring the team to an 11-5-2 record. For his efforts, he earned a spot on the All-Essex County and All-Super Essex Conference First Teams and garnered first team all-state honors from the Soccer Coaches Association of New Jersey. Petrucci played for Players Development Academy on the club circuit.

One of three 2019 recruits hailing from New Jersey, Russo earned First Team All-State honors from NJ.com after anchoring a dominant Holmdel High School backline. The Hornets won their second consecutive Group 2 State Championship and earned NJ Advance Media Boys Soccer Team of the Year honors. Not only a threat in the Holmdel half of the field, Russo also chipped in six goals and eight assists as a senior. Russo also played with Club NJX.

Scalici begins his collegiate tenure after establishing himself as one of the Garden State’s top high school players. Morris Knoll High School’s all-time leading scorer with 84 career goals, Scalici earned All-America honors from United Soccer Coaches and was twice named the New Jersey Player of the Year by the organization. On June 6, he garnered Gatorade New Jersey Boys Soccer Player of the Year accolades as well. As a senior, Scalici scored 30 goals and dished out 15 assists while leading Morris Knolls to its first sectional championship since 1969. On the club circuit, Scalici played for STA Soccer.

Rounding out the 2019 recruiting class is Scheib, a 6-foot-1 netminder out of Plymouth, Minn. As a senior at Robbinsdale Armstrong high school this past fall, Scheib was named to the all-state second team and was also rewarded with a spot on the All-Northwest Suburban Conference First Team after allowing 1.3 goals per game. Scheib played his club ball with MapleBrook SC.

The St. John’s men’s soccer team will begin the fall season Aug. 30 when the squad travels to Boone, N.C., for a matchup with Appalachian State. The Johnnies will play their home opener on Sept. 6 against Manhattan. 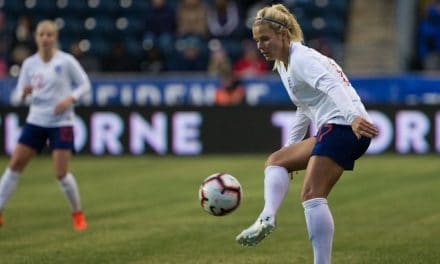