BRADENTON, Fla. – The United States is heading to the the FIFA Under-17 World Cup.

The Americans used second-half goals from Gianluca Busio, Gio Reyna and Ricardo Pepi to defeat Panama 3-0 in the quarterfinals of the 2019 Concacaf U-17 Championship at IMG Academy Sunday.

The U.S. reached the international tournament for a record 17th time and advanced to the semifinals of the confederation championship, where it will face Canada Tuesday at 6:30 p.m. ET.

The FIFA competition will be held in Brazil in October.

Playing against a Panama side content to sit inside its own half and look for counterattacks, the Americans carried 76 percent of first-half possession, but found it difficult to come up with many scoring opportunities against the Central American side’s defensive posture.

The early afternoon heat and humidity in Bradenton also made things challenging, though the U.S. did create one quality chance in the ninth minute when captain Gio Reyna cut inside from the left to rocket a right-footed effort that goalkeeper Saul Espinoza put out for a corner kick.

Things opened up on the other side of halftime as head coach Raphael Wicky’s side continued to push for the opening goal. In the 50th minute, Griffin Yow sprung free down the right and centered a cross that deflected off Panama’s Jesus Gil to Alfonso Ocampo-Chavez. He passed back for Busio, but his one-time hit from close range went over the bar.

Busio made things right four minutes later. A nice build-up from Daniel Leyva led to Ocampo-Chavez slotting the attacker through on goal, dinking it past defender Edgardo Espinosa before tucking his effort inside the left post to give the U.S. the 1-0 lead in the 54th minute.

Continuing to pour on the pressure, Ocampo-Chavez was upended in the box by Espinosa in the 59th minute, forcing referee Daneion Parchment to point to the penalty spot. Reyna slotted his take to the lower right corner to give the U.S. a 2-0 lead on the hour mark.

Having replaced Reyna in the 69th minute, Ricardo Pepi got his name on the scoresheet six minutes later as a three-pass sequence finished with Leyva slotting him through on goal, before the forward tucked his effort to the far post to give the Americans a 3-0 lead in the 75th minute.

The U.S. closed out the match with its third consecutive clean sheet, holding its opponents scoreless for the last 306 minutes.

As for the championship match, in the opening game for the U.S. and Canada, the Maple Leafs grabbed a 2-0 lead before the Americans struck for three second-half goals en route to a 3-2 win. 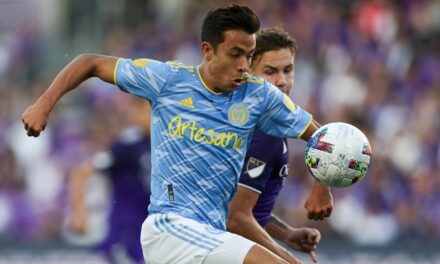 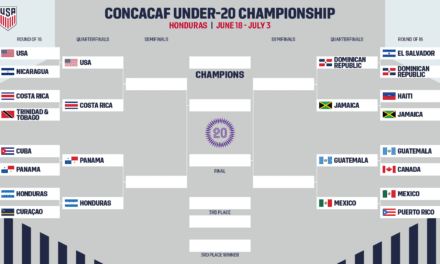 FOR A WORLD CUP BERTH: USMYNT meets Costa Rica in Concacaf U-20 quarterfinals