Giovanni Reyna might be a young man without a club team, but he certainly has a spot on the U.S. men’s Under-17 national team as it puts its finishing preparation touches on qualifying for the U-17 World Cup.

In fact, head coach Raphael Wicky felt that the son of New York City FC sporting director and former U.S. international Claudio Reyna will be invaluable to the team as it enters the Concacaf U-17 men’s championship at IMG Academy in Bradenton, Fla.

“I think a player like him needs to be involved as much as possible in the game,” Wicky said. “He has a lot of talent. He makes the other players look better, he makes things easier for the other guys. So, I would like to have him as much as possible in the center of the field somehow. I don’t think the position where he plays when we have the ball is important. It’s more that he knows I want him in the center.

“So, he can start from the wing and come inside. He can be as a nine and drop down a little bit. He can start as a center midfielder, as an eight or a 10. So, there is a lot of different variations of him. I want to put him into positions where he touches the ball a lot. He has the potential, the quality to create chances.”

The younger Reyna has been linked to Borussia Dortmund for months but hasn’t signed a contract. He is without a team, a club side, at least.

When asked if he knew Reyna’s exact status with Dortmund on whether he signed with the Bundesliga club Wicky replied, “I can tell you how I met him and how I feel having him in camp and how i saw him in training, but it is not my job to announce his actual status with his club situation. I hope you understand that.

“Having him in mini-camp, he was very excited to be here. With the group he obviously was very good. He is very talented. we had a game in that mini-camp against Montverde Academy down in Florida and he played 60 minutes there, which is good for him. As far as I know, he went back to his club and trained last week two weeks and came back and is now full training with our team. He’s good, he’s excited. He’s very, very talented and very important to this group.”

As it turns out, so are a couple of current national team players in the NYCFC Academy system — defenders Joe Scally of Lake Grove, N.Y. and Tayvon Gray of the Bronx, N.Y.

They are on the 20-player roster.

“Joseph Scally obviously in our plans to normally be the right defender,” Wicky said. “He’s very important for this team, has been in the recent games. His personality, his fighting spirit, his mentality to work for the team is really, really good and I’m really happy to have him.

“Tayvon actually is a very interesting player for every coach because he covers three to four different positions, which helps me a lot when you have to choose a roster with limited numbers that you can pick. So, Tayvon can play center back, can play in the center midfield, he can play right and left fullback. That obviously gives me a lot of different options. He’s a real key player.”

The Americans were drawn into Group F and kicks off its tournament against Canada Thursday, May 2 at 6 p.m. ET. The U.S. then faces Barbados Saturday, May 4 at 4 p.m. ET and finishes group play against Guatemala Monday, May 6 at 6 p.m. ET. The four semifinalists will qualify for this fall’s FIFA U-17 World Cup in Brazil.

Wicky said he was most impressed with his team’s “amazing mentality, which is a big factor for every team.”

“Besides the individual quality we have, the individual talent from different players, it’s all about being a team, forming a team, bonding together, liking being together. I have had this impression from the first moment I met them. I always say it is almost impossible to be all friends in a team, at least that’s my experience as a player. You don’t have to be friends. But at the end of the day, it’s nice if the players like to hang out with each other. This is the feeling I get.

“Even players who are in competition with each other for the same spot, they hang out together. They encourage each other in training sessions. So this mentality, and this team spirit, wanting to achieve something together, knowing that it is only works together, I think is a big [strong] point for this team.” 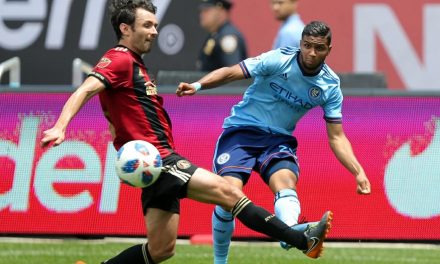 FIT TO BE TIED: NYCFC rallies to tie Atlanta