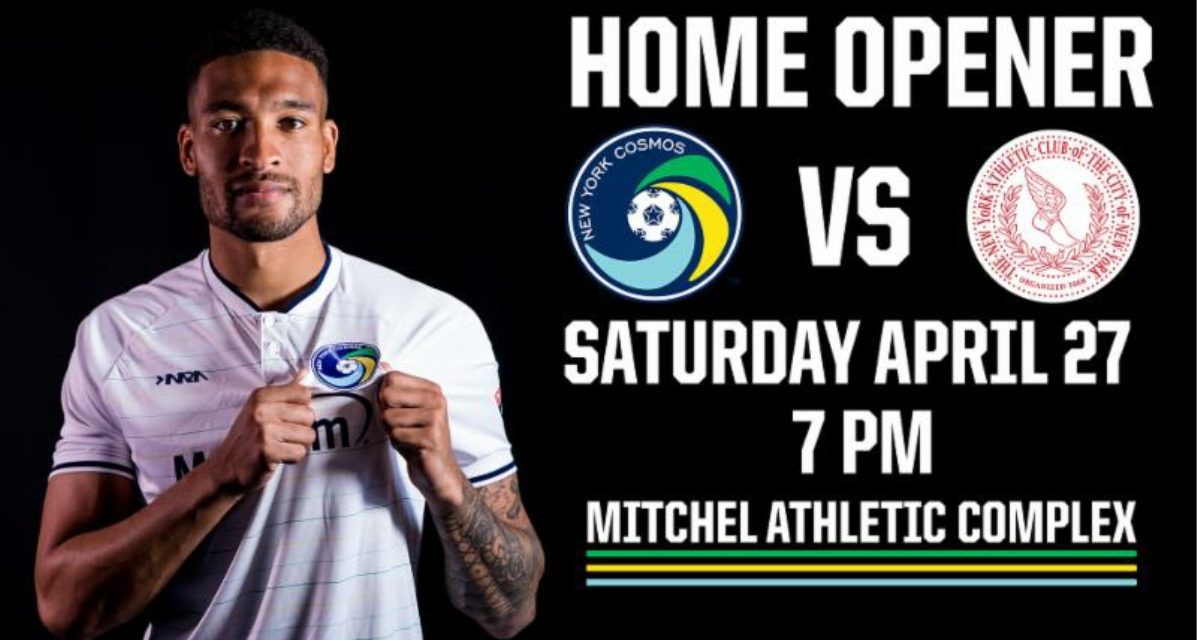 UNIONDALE, N.Y. — If you hear a section of fans cheering for or shouting out Aaron Dennis’ name at the New York Cosmos season opener at Mitchel Athletic Complex on Saturday night, there will be a pretty good reason.

That’s right, 50. His friends are from elementary school and from his old travel teams when he performed in the Long Island Junior Soccer League.

So, needless to say, Dennis said he was “super excited” about the game.

“We’ve been working for about two months now,” he said. “We’ve had some preseason games. I’m feeling sharp and excited to play in front of my friends and family.”

Especially while wearing a Cosmos jersey.

During the waning minutes of a Cosmos Academy game in Texas in the spring of 2011, Dennis walked off the field thinking it was the last time he would wear the team’s colors. He was heading off to Villanova University.

Fast forward ahead eight years and Dennis will wear a Cosmos shirt again; he will wear No. 8. So, there is a good reason why the game is a big deal for the 26-year-old.

“Yes, 100 percent,” he said. “I always wanted to play for the club professionally … The day is coming on Saturday, so I’m going to work hard for my team and for the badge.”

“Every day I try to improve,” he said. “Obviously, no one’s a Messi and no one’s Ronaldo, so, there are things you can work on every day. If I lose the ball doing something one day, the next day I try to correct my mistakes. That’s how I try to go through my weekly practice sessions. So, hopefully, everything will come into fruition this weekend. ”

What has the U.S. Virgin Islands international been most impressed with? The locker room environment.

“We have a great group of guys,” he said. “Everyone gets along on the field there is a lot of talent as well. There are a lot of players who have impressed me, players that I enjoy playing with. It’s been great in the locker room and on the field.”

No doubt proper chemistry can go a long, long way for a team.

The Cosmos will vie for not one, not two, but three trophies this year — the NPSL, the Lamar Hunt U.S. Open Cup and the Founders Cup.

Dennis was optimistic that the Cosmos will enjoy a successful 2019.

“First of all, the brand we’re playing for,” he said. “I hope the guys understand that it’s important to represent the Cosmos at the highest level possible and in terms of the talent and the coaching staff with Carlos [Mendes, head coach] and Luis [Gutierrez, assistant coach], the instructions they give, and the chemistry from the locker room, we have to do well.”

His goals — team or individual — are simple.

“Team-wise, I just want to win trophies,” Dennis said. “As long as we’re winning trophies, I’m sure guys will get their accolades. But for me the team goes first. As long as the team is doing well, individuals will be doing well.”

IT WAS 46 YEARS AGO TODAY: That Cosmos won their 1st NASL title