It seemed that everything the England forward touched turned into goal.

In 11 appearances against the Lancers and Flash over a five-year period, Tinnion tallied an astonishing 10 goals and six assists while his teams registered a just an amazing 10-0-1 mark against those teams.

Whether Tinnion’s nemesis genes were passed down to his son Joey, remains to be seen, although we could find out Friday night when the forward and his Detroit Waza Flo teammates visit the Lancers in their Major Arena Soccer League season opener at the Dome Arena in Henrietta, N.Y. at 7 p.m.

The 5-9, 160-lb. Tinnion did his damage against the Rochester sides as members of Team Hawaii, Colorado Caribous and mostly with the Detroit Express, and with the ASL all-star team that played the Flash in the annual game at Holleder Stadium in 1982.

When he was a headache and a half for the Flash in 1982, the then 34-year-old Englishman explained his success when he was named ASL MVP for leading the league in scoring with 22 goals and 15 assists for 59 points. Not surprisingly, Detroit also won the regular-season title and the ASL playoff crown as well as the Express had three of the top goal-scorers in the league, along with No. 2 Andy Chapman (23 goals, 6 assists, 52 points) and No. 4 Billy Boljevic (13 goals, 14 assists, 40 points).

“I’ve got a lot of good young Americans around me,” Tinnion told the Rochester Democrat and Chronicle in 1982. We’ve got a well-balanced team. It’s given me a lot more freedom this year. And when you select yourself [for the lineup] it helps.”

Tinnion was referring to the fact he was head coach of the Express. Actually, he was listed as assistant coach because of an archaic ASL rule at the time that stipulated that head coaches could not play. Instead, Express president Dennis Gilstad was listed as the head man.

“I feel a lot of players don’t lose speed,” Tinnion said. “Stamina is the thing that goes first. We’ve got a lot of good young players like [midfielder[ Mike Powers. In some games when my tongue is literally hanging out, Mike does his own workrate and does a share of mine.

“All players go through spells in their career where everything goes right. I’ve had shots deflected that have gone into the net. Like they say, you make your own luck. … I’ve never been known as a proven goal-scorer. I was usually good for 10 or 15 goals a year. I’m on a high-scoring team and the more chances you get, the more goals you score.”

If you really wanted to get technical, Tinnion was listed as assistant coach because of an archaic ASL rule at the time that stipulated that head coaches could not play. Instead, Express president Dennis Gilstad was listed as the head man.

“They’ve changed every other rule in the book this year, why not that one?” Tinnion asked. “I guess that’s not important enough.”

At the time, Tinnion hadn’t set a retirement timetable for himself.

“I’ll play until the players tell me I’m not doing my business,” he said at the time. “On this club we have some players and characters who aren’t afraid to voice their opinion … or I will quit when I stop enjoying it.”

This is how Tinnion fared against Rochester pro teams, from 1977 through 1982:

He scored one goal — against goalkeeper Jack Brand — in Team Hawaii’s 4-1 home win over the Lancers at Aloha Stadium.

Assisted on former Cosmos forward Jomo Sono’s goal at 12:32 of sudden-death extratime in the Colorado Caribous’ 1-0 victory over the Lancers before 4,136 at Mile High Stadium.

His saved shot set up the Express’ lone goal, a late equalizer, in its 2-1 shootout triumph over the Lancers at Holleder Stadium. Tinnion originated the play at 86:13 (the NASL recorded goals down to the exact second) when he drilled a 20-yard shot that Rochester goalkeeper Shep Messing punched away. Keith Furphy cleaned up by converting the rebound.

“The guy took a tremendous shot,” Messing said. “I tried to get my hands on it any way I could. It had a lot of velocity. I knocked it away. What happens after that is luck. You can’t fault any people at all. Everybody did their job.”

In rare failure against a Rochester side, Tinnion missed his shootout attempt. The tie-breaker, however, was won by the visitors.

One interesting situation: Tinnion became the first player to kick the ball out of Holleder at 98:41 (second extratime). Detroit was called offside by referee Bob Sumpter. Tinnion, however, ripped a shot at the net anyway. The ball sailed over the goal at the open end of the stadium over the fence and toward School 40. A boy ran after the ball as the play stopped and he never stopped running and didn’t return. The cost-conscious Lancers were out a $45 ball.

Tinnion was involved in two scoring plays in the Express’ 7-2 walloping of the Flash before 4,748 at Wayne State Stadium. After giving Alex Vayman all sorts of problems, head coach Don Lalka pulled his midfielder with Pat Occhiuto, who fouled the forward near the goal line. Ron Atanasio converted the penalty kick to equalize. Tinnion then set up Andy Chapman’s goal at 42:00.

Tinnion, who replaced the injured Chapman late in the opening half, scored at 53:00 to spark Detroit’s comeback from a two-goal deficit as it managed a 2-2 draw with the Flash before 4,847 at Holleder.

Tinnion was at it yet again, this time putting home an insurance goal at 86:06 to help Detroit to a 2-0 home victory before 10,136 supporters.

Guess who helped spoil Flash head coach Don Lalka’s 39th birthday. If you guessed Brian Tinnion, you were correct. Tinnion collected two goals and three assists to power Detroit to yet another big victory over Rochester, 7-1, in front of 5,101 at the Pontiac Silverdome. And Tinnion wasn’t even the star of the game as Chapman struck for four goals, including three consecutive scores with a 14-minute span in the final half.

The Express kept on coming up sevens against the Flash, this time recording a 7-2 win before 7,108 fans at the Silverdome in Pontiac, Mich. Tinnion found the net once, which gave the hosts a 2-1 lead at 36:21.

In the first home game for interim head coach Joe Horvath, Tinnion found the net as he put away a Chapman cross after the latter wasn’t picked up by the defense and scored against 18-year-old goalkeeper Peter Grillo en route to a 4-2 victory. Grillo had been signed the day before after the Flash had lost its first two keepers to injuries.

In fact, Tinnion showed his overall team play with a little more than a minute remaining in the match as Rochester captain Nelson Cupello fired a shot on goal that was headed over the crossbar by the forward before 3,584 at Holleder.

It didn’t matter who the Flash put in the net. For the third consecutive game, David Coombs couldn’t stop Tinnion in a 2-1 Detroit win in front of 4,714 at the Silverdome. This time Tinnion tallied at 86:10.

Playing for the ASL all-stars against the Flash before 3,047 at Holleder, Tinnion scored twice within 75 seconds to break open a close match. He converted a Clyde Watson cross at 19:50 and the same combination clicked again for a two-goal lead at 21:05 in what turned into a 3-2 all-star win over Rochester.

IT WAS 50 YEARS AGO TODAY: Lancers made a winning NASL debut 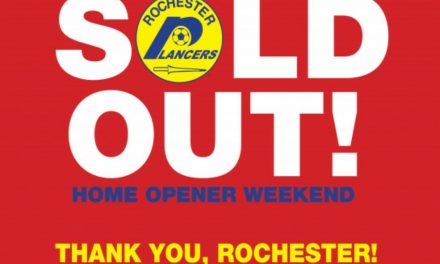 PAST RIVALRIES — PART III: Rochester vs. Toronto was a soccer war and sometimes just a war and then some