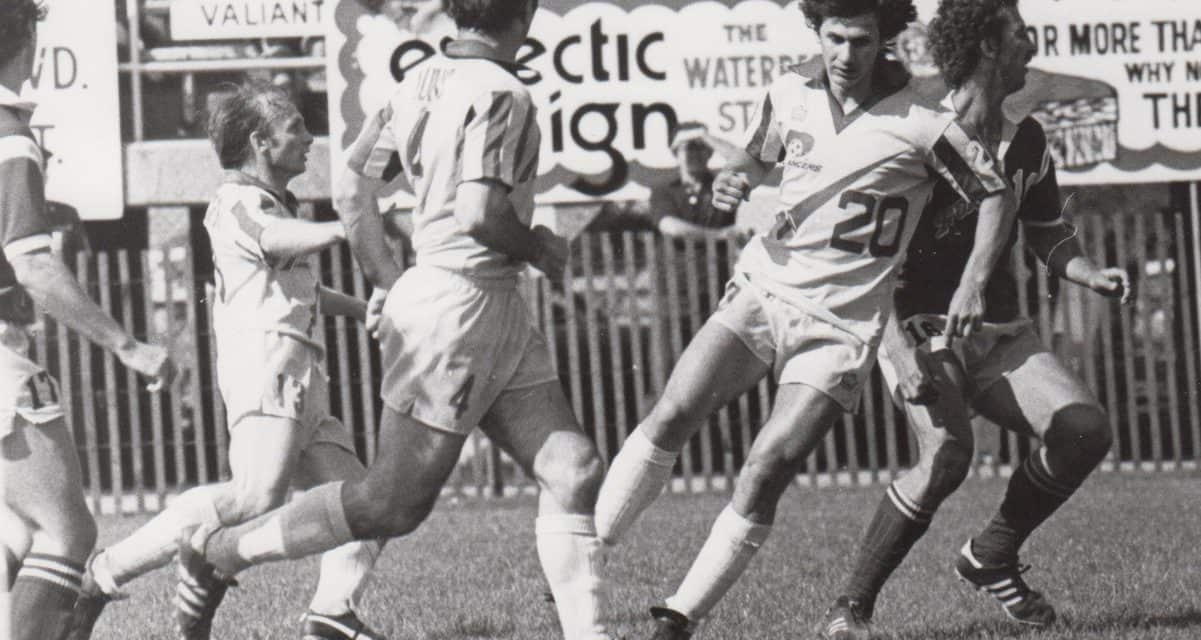 Branko Segota forged a nice, 20-year career in soccer, much of it as an indoor player. (Photo by Deborah M. Bernstein)

But many a soccer fan from Western New York might claim the Rochester Lancers actually did.

That’s because the team was dominated by players that performed on the North American Soccer League team at one time or another.

Take, for example, the first Arrows team that started the first indoor soccer dynasty while performing at the Nassau Coliseum in Uniondale, N.Y. during the inaugural 1978-79 season.

A total of 17 players wore the blue and gold of the Lancers. And that doesn’t include Don Popovic, who coached the outdoor Lancers from 1976-79 or Peter Duerden, who was his assistant coach for both teams and played a match or two on defense for the Arrows.

In fact, the honor of scoring the very first indoor goal went to a Lancer –Pollihan. While overlapping on the left flank at 2:10 of the second quarter of the opening match against the Cincinnati Kids, drilling a return pass from Alberto past goalkeeper Keith Van Eron, the first of thousands of indoor goals.

Pollihan admitted that he didn’t think twice about his accomplishment. “Nothing special,” he said. “It didn’t dawn on me that this was the first goal. We had no idea how this league was going to be accepted, how long it would be around. So, it was no big celebration on my part. I was excited that a goal was scored, but we knew that in indoor soccer there was going to be more than one goal scored in that game.”

For an inaugural game that ushered in a new sport, the game at the Coliseum certainly had plenty of hoopla. Pete Rose, who was still playing baseball and was about to sign as a free agent with the Philadelphia Phillies, was part-owner of the Kids, kicked out the first ball.

“It was an exciting time,” Pollihan said.

“A lot of excitement,” Popovic said. “I think a lot of people wanted to see what kind of game we were going to show. I thought it was a very exciting game and everybody enjoyed it very much.”

For Pollihan and his Lancers teammates, it was an opportunity to keep in shape and earn a living playing the sport they loved so much. At the time, he, like the other American players, earned several thousand dollars a season.

“It was not large by any means,” Pollihan said. “The pay during the season was enough that I didn’t have to do work on any other jobs. When the season was over my pay would stop and I would have to find something to do. When the league came about, the pay scale was relatively low. … It allowed us the pleasure of getting paid to do something we love instead of finding a job in the offseason. The [MISL] salaries initially for the most part were entry level. The salaries grew very quickly. when the NASL started losing teams, the top NASL players came into the indoor game and in some cases were making more money in the indoor game than the outdoor game.”

And it gave the Americans an opportunity to develop.

“We needed to play all-year round, not just during one season, the NASL season; 24 games, you were not getting a lot of time on the field,” Pollihan said. “You had a ton of down time in the offseason. We needed as Americans to really grow to compete with the South Americans and Europeans who were coming in to play consistently.

“It seemed like a very interesting and rewarding thing for players where we could play year around. Play indoors in the winter and go back to the NASL in the spring and the summer. Basically be a fulltime professional soccer players. It looked like to be very promising in that respect.”

Dave Sarachan, who ended a 13-month tenure as U.S. national head coach in November, was one such player. An American midfielder-forward, Sarachan rarely saw action trying to break into a Rochester lineup that housed many European players. He got an opportunity to produce with the Pittsburgh Spirit, Buffalo Stallions and Baltimore Blast before continuing his career as a coach at Cornell University, Major League Soccer and the U.S. national team.

“If I didn’t have indoor, I don’t know how long my outdoor career would have lasted to be honest,” said Sarachan, who recently was named coach of the North Carolina FC (United Soccer League Championship) earlier this week. “It was a challenge as an American to get on the field back then, in my position especially because I was a winger, a forward, a midfielder. Usually the American guys who got the real chances were goalkeepers and backs. So, when indoor was available it kept me going and earning a living.

The best-known Arrow and indoor player of all-time never played with the Lancers, although the NASL side tried to pull strings to bring Steve Zungul to Western New York. Zungul recorded the league’s first hat-trick on opening night and never stopped filling the net on a regular basis.

Zungul, 24 at the time, quickly earned the nickname, the Lord of All Indoors. By the time he retired at 35 after the 1989-90 season, Zungul had written the MISL record book. He played for eight championship teams, four with the New York Arrows and four with the San Diego Sockers. He finished with 652 goals, almost 200 more than the second leading goal-scorer, Segota (463). He also had the most assists (1,123).

“Steve Zungul was a helluva player,” Popovic said. “He made me look good.”

So did Alberto, the playmaker, the sparkplug midfielder of that team. He might not have had the same gaudy numbers as Zungul and company, but he played a key role in the team’s success.

“Luis Alberto was helluva a soccer player,” Popovic said. “He made he looked good.”

Zungul and Alberto weren’t the only ones. That Arrows team included a 17-year-old who made his professional debut in a 9-2 loss at the Houston Summit Soccer. That was Segota, who forged out a successful soccer career, indoors and out, over two decades. Old-time Rochester fans might remember the former Canadian international in his two seasons with the Lancers. His first year was a doozy, connecting 14 times over 13 games in a half a season, snaring rookie of the year honors from the Professional Soccer Reporters Association.

Segota, who played in the 1986 World Cup, finished second in career goal and points scoring with 463 goals and 841 points. His 378 assists ranked him third.

The Lancers helped seed the MISL during those early days. Pollihan eventually went to the Baltimore Blast and helped make that team into a powerhouse. Sarachan eventually found his way to the Buffalo Stallions, as did Jim May, Francisco Escos, Frank Odoi, Tommy Ord, Meno Droegmoeller, Carlos Metidieri and Ercoli before he ventured down to Baltimore. Sal DeRosa, the only coach to guide the Lancers to an NASL title (1970), directed the first Stallions side.

This writer gave those other teams unique nicknames, calling the Arrows the Lancers’ winter team or Lancers’ South. The Blast was known as Lancers Deep South, the Stallions as Lancers West.

All had varying degrees of success.

The Stallions rolled off five consecutive wins to begin their tenure during the 1979-80 season before 11,028 at Memorial Auditorium in Buffalo. In their home debut, Metidieri, making a comeback after a five-year retirement, led the Stallions in a victory lap after a 9-5 win over the Philadelphia Fever Dec. 7, 1979. Metidieri, the only player in NASL history to win back-to-back MVP awards and scoring crowns, scored two goals and Sarachan added a brace and an assist.

The Arrows-Stallions rivalry turned into one fierce derby because the players knew one another as some of their encounters became classic confrontations. In fact, their first match was one wild and crazy game as the Stallions edged New York, 10-9, in overtime Jan. 11, 1980. The record books will say that Slobo Jankovic’s goal 2:37 into OT, which beat goaltender Shep Messing, was the deciding factor, but so much more transpired in this see-saw battle. Zungul struck for two first-period goals, but the hosts stormed back with three of their own within a span of 71 seconds. The Arrows grabbed a 6-4 advantage when Zungul, who was injured earlier and was forced to wear a bandage on his head, scored twice. Again, the Stallions equalized at 6-6 before taking a 9-7 edge before Laszlo Harsayni and Segota tied the score to send the game into OT. The Arrows dominated the extra period, but Stallions goalkeeper Scott Manning of Webster, N.Y. (suburban Rochester) was equal to the task before Jankovic’s dramatic game-winner.

Two days after the Arrows rolled to a 9-2 triumph over Buffalo at home Feb. 6, 1990, the Stallions got a measure of revenge in a physical tussle at the Aud. New York enjoyed a 5-2 halftime lead, but May, who was kicked in the shoulder by Zungul in the opening period, needed to be replaced by Manning at halftime. Manning was outstanding in the second half, holding off the visitors as Buffalo tallied four answered goals en route to a 6-5 victory. Jankovic did the honors again, this time scoring the winner at 5:54 of the fourth quarter.

The Arrows won the first four MISL championships and eventually folded after the 1983-84 season. Many of their players, former Lancers, continued their careers indoors for many years to come.

Next: Part III — Trying to bring the indoor game to Rochester 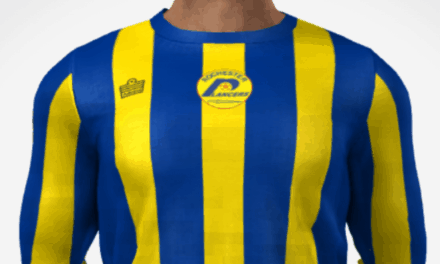 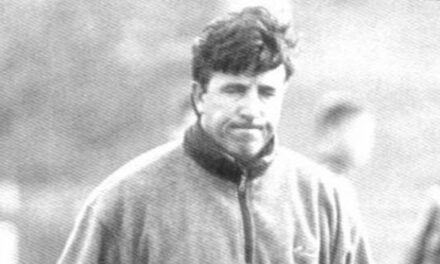 OFFSIDE REMARKS: The last time the outdoor Lancers won a playoff game was during a wild series with the Toronto Metros-Croatia in 1977